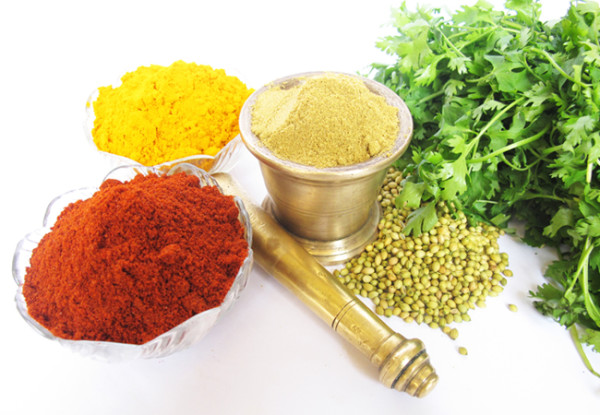 Cayenne, turmeric, garlic, and mustard seeds can spice up any diet in a healthful way.

Many cultures use a variety of herbs and spices in their traditional foods; America is no different. Herbs and spices from plants—in addition to offering flavor and even food preservation power—amplify the health potential of every meal. You want healthy dinner ideas? The phytonutrients in spices and herbs have antioxidant, anti-inflammatory, anti-microbial, anti-viral, anti-cancer, cholesterol-lowering, and kidney- and liver-protecting properties.

Another plus with herbs and spices is that they can enhance the flavor of healthy dinners while helping you lower your sodium intake. A high-sodium diet can put you at higher risk for stroke and heart disease.

By boosting the taste of your dishes with herbs and spices, you can skim the salt from foods, and you won’t even miss it. And, if you’re fighting the battle of the bulge, here’s a weight-loss tip: Herbs and spices will improve the taste of poultry, fish, and vegetables so you can skip big calorie counters such as rich sauces and gravies.

Highlighted below are herbs and spices that have received special attention for their health attributes and thus contribute to healthy dinner ideas. 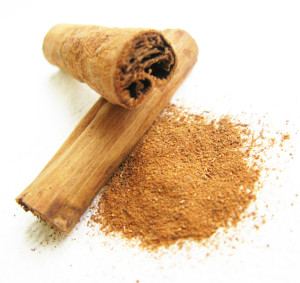 Cinnamon, among multiple benefits, may help with the fight against and management of diabetes.

Research has revealed that cinnamon has anti-inflammatory, anti-oxidant, and antimicrobial effects, which are related to cinnamon’s phytochemicals, including cinnamaldehyde, cinnamyl acetate, and cinnamyl alcohol.

In addition, cinnamon may hold promise in glucose control: It appears that cinnamon helps to slow the rate of stomach emptying, which slows the rise of blood glucose that occurs after you eat. And, cinnamon may help boost responsive to insulin (called insulin sensitivity), which can help with diabetes control and treatment.

Garlic is a member of the allium vegetable family, which is known for its health-defending powers. Garlic is packed with a variety of sulfur-containing phyto-chemicals, such as allicin, alliin, and dithiin. In addition, it contains manganese, vitamins B6 and C, and selenium. These compounds have anti-inflammatory and antioxidant activities, showing promise in lowering cholesterol and blood pressure levels and preventing blood clotting. 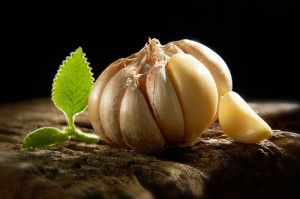 Garlic is a worthy source of manganese, vitamins B6 and C, and selenium, compounds that have anti-inflammatory and antioxidant benefits. [Photo: © HongChan001 | Dreamstime.com]

In addition, garlic has antibacterial and antiviral effects, which might help fight infections. And, garlic may aid in cancer protection, specifically against colorectal cancers and renal cancers.

It’s easy to find recipes that include garlic, since it is a prominent ingredient in healthy meal plans across the globe, from Mexican and Peruvian dishes to Italian, French, Indian, and Thai staples.

Ginger has anti-inflammatory and antioxidant actions, possibly related to its phytochemicals called gingerols, responsible for ginger’s unique flavor. Studies show that ginger may be effective in preventing nausea associated with motion sickness and pregnancy. In addition, ginger has shown promise in relieving pain resulting from arthritis, as well as tumor-fighting activity in animal studies.

Ground ginger is commonly found in recipes for cookies and other baked goods, but you also can include ginger in healthy dinner options, such as stir fries, vegetables (ginger pairs particularly well with carrots, broccoli, and sugar snap peas), and whole-grain side dishes. 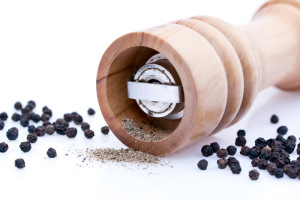 The phytochemical found in black pepper, piperine, has been linked with anti-inflammatory and anti-cancer benefits.

Black pepper owes its characteristics to its main phytochemical, piperine, which has been linked with antioxidant, anti-inflammatory, and anti-cancer actions.

The common denominator of all of these red pepper forms is their fiery heat. The heat of red pepper is traced to its phytochemical capsaicin, which has anti-cancer, anti-inflammatory, and pain-relieving effects.

Turmeric’s main compound, curcumin, has impressive anti-inflammatory effects comparable to anti-inflammatory drugs, but, unlike drugs, curcumin has no known side effects. Studies have found that curcumin may be helpful in treating inflammatory bowel disease, rheumatoid arthritis, and even cystic fibrosis. It also has been shown to inhibit the growth of certain cancers and to protect the heart by preventing oxidative stress and lowering cholesterol levels.