Home » Daily » Diabetes » Diabetes Signs and Symptoms: What Are My Long-Term Risks? 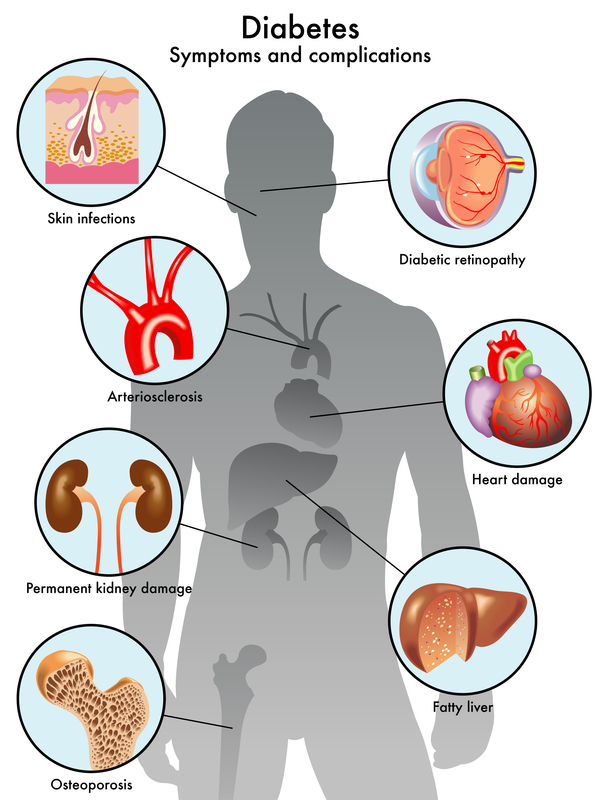 There are a wide variety of long-term complications associated with diabetes.

If you’ve experienced diabetes signs and symptoms, your healthcare provider may have told you about short-term risks of poorly controlled diabetes, among them them diabetic emergencies or diabetic shock.

These aren’t the only reasons, however, that you need to keep your diabetes signs and symptoms tightly controlled. (See also our post “How to Lower Blood Sugar.”) There are a wide variety of long-term complications associated with diabetes. Careful management can help delay or even avoid many of the following conditions.

There is a very strong association between diabetes signs and symptoms and all of the different types of cardiovascular disease, including coronary artery disease (which causes heart attacks), stroke, and peripheral arterial disease (narrowing of the arteries of the legs).

Many people with diabetes, particularly type 2 diabetes, have co-morbid conditions like high blood pressure, obesity, elevated cholesterol levels, and sedentary lifestyles that can contribute to their increased risk of developing cardiovascular disease.

Our kidneys contain millions of tiny blood vessels whose job it is to filter our blood. High blood glucose levels damage these blood vessels over time, causing the kidneys to leak valuable substances like protein and blood cells into the urine. If left untreated, the kidneys will ultimately lose their ability to filter waste products from the blood and patients will require dialysis (filtering of the blood by a machine) or kidney transplant.

The risk of developing kidney disease is increased by high blood pressure (hypertension), which also damages the tiny blood vessels in the kidneys. In a recent study, 44 percent of all cases of kidney failure were caused by diabetes.

There are several different types of eye disease complications that can occur with diabetes.

People with diabetes signs and symptoms are at increased risk of developing bacterial or fungal infections of the skin. Itching is common among people with diabetes either because of infection or poor blood flow. There are a number of skin conditions associated with diabetes, the most common of which are:

Recent studies have suggested a link between type 2 diabetes and the risk of developing Alzheimer’s disease. One theory is that the increased amounts of insulin produced in type 2 diabetics crosses the blood brain barrier and promotes the formation of amyloid plaques found in the brains of people diagnosed with Alzheimer’s.

People with diabetes are at greater risk of developing gum disease, oral infections such as thrush, and dry mouth