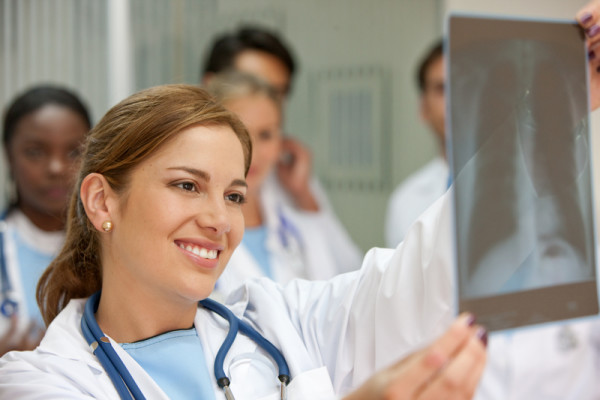 Don’t hesitate to see your health care provider if you find yourself with a cough that won't quit. It could be COPD, and while it's not curable, treatments (including medications and inhalers) may help.

Knowing the facts about lungs will help you understand why COPD—chronic obstructive pulmonary disease—can be difficult to diagnose until it is quite advanced. The lungs, with more than 300 million alveoli, have an amazing capacity. Not all of these alveoli are used for the day-to-day work of normal breathing—the extra capacity is needed in case of damage or disease. This large capacity means that young people have a great deal of excess lung function. As we age we lose some of this excess capacity, but in the absence of COPD symptoms and a lung disease, the lungs continue to function normally.

Because most people never use their full lung capacity, early COPD symptoms in the form of diminished lung function often aren’t noticed in the early stages of COPD. As the disease gets worse, people may become less active, not realizing that their lung function is compromised. They may be unaware of the extent of their limitations, and also unaware that these limitations are due to a lung disease.

At some point—often at relatively low levels of exertion—the body will no longer be able to compensate, and lung problem symptoms become impossible to ignore.

COPD symptoms include the following:

Shortness of breath is the COPD symptom that drives most undiagnosed people to see a doctor. At first, shortness of breath is only noticeable with exertion, but eventually breathlessness will hamper routine activities of living, like washing, dressing, and cooking. A chronic cough may at first be intermittent, but later may occur every day.

For people with COPD, it is common to cough up small quantities of sputum. The sputum may become thicker in the later COPD stages. Typical COPD breath sounds (like wheezing) and chest tightness may or may not be present during day-to-day living, but often become very prominent when people with COPD catch a cold.

The frequency and severity of episodes of coughing and shortness of breath will increase as COPD symptoms worsen. Fatigue and weakness are common complaints. Weight loss may occur in the more advanced stages of the disease, along with morning headaches due to a build-up of carbon dioxide in the blood overnight.

Having a chronic cough and coughing up sputum when there is no identifiable reason, such as a cold or flu, is not normal. It is important to see a doctor during the early signs of lung disease, because following COPD treatment guidelines early enough could benefit your breathing and help you avoid COPD complications.

In addition, if smokers learn that they’ve developed COPD or another lung disease early enough, they may be able to stop smoking before the disease becomes more serious. Many people with COPD wait until breathing has become a chore and their quality of life is seriously compromised before they consult a doctor, but this could seriously impact your life expectancy with COPD.

COPD and Other Health Conditions

COPD complications include the fact that it raises the risk for other health problems. For example, a person with COPD is more likely to catch a cold or the flu, and is more susceptible to getting pneumonia. Older adults with COPD also appear to have an increased risk for a type of mental decline called mild cognitive impairment, which can lead to Alzheimer’s disease.

Severe COPD also appears to increase the risk for heart attack, stroke, and heart failure (a condition in which the ability of the heart to pump enough blood to the body is impaired). Heart function may be diminished in people with COPD, even if they have only mild symptoms.

COPD also takes a toll on mental health. People with COPD are more likely to be diagnosed with depression than healthy individuals or those with a different chronic illness (diabetes, for example). Consult with your doctor or a mental health professional if you are feeling sad or think you might be depressed—help is available.

People with COPD also appear to be at increased risk for developing shingles, most likely because having COPD weakens the immune system. Shingles is a reactivation of the chicken pox virus that results in a painful rash, and it most often occurs in older adults and people with health conditions that impair their immune system.