Home » Daily » Sleep » Are You Staying Up Too Late Because of Delayed Sleep Phase Syndrome? 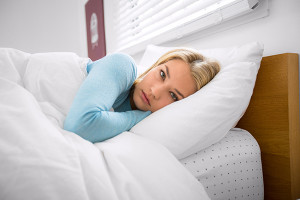 If you find yourself lying awake at night because of delayed sleep phase syndrome, then have to get up to be at work on time, you could easily become sleep deprived. Resetting your Circadian rhythms could be the answer.

There may be a scientific reason why some people are night owls: delayed sleep phase syndrome. It’s a sleep disorder in which your body’s clock tells you to fall asleep a few hours later than most people hit the sack. The problem is that this delayed bedtime makes it difficult to wake up when the rest of the world is getting ready for school, work, and the other activities of the day. The condition is most common among teens and young adults, but can affect older people too.

You may be advised by your doctor to take a sleep disorder test, but only after a review of your symptoms and a look at your regular sleep schedule suggests that delayed sleep phase syndrome may be present.

What Is Delayed Sleep Phase Syndrome?

You may have heard the phrase “circadian rhythms” related to when you fall asleep and when you arise. These rhythms are part of the body’s natural clock that regulates sleepiness and wakefulness.

In people with delayed sleep syndrome, their circadian rhythms are out of step with the majority of people. Instead of falling asleep by 11:30 p.m. and waking up at 7 a.m., you don’t get really tired until 1:30 or 2 a.m. But if you still have to get up at 7 a.m., you’re walking around deprived of sufficient sleep.

An estimated 15 percent of adolescents have delayed sleep phase syndrome. It’s not clear why this syndrome develops in an individual. However, one theory suggests that it is a result of an over-adjustment to the change in circadian rhythms that start after puberty.

While it may seem a conscious decision to stay up late texting, talking on the phone, watching TV, or being on the computer, teens with delayed sleep phase syndrome aren’t deliberately fighting their body’s natural desire to get more sleep. The most common symptom of the condition is an inability to fall asleep at an earlier time. This goes hand in hand with the result of poor sleep, which involves difficulty waking up and daytime sleepiness.

Usually, there aren’t other sleep problems. If you have delayed sleep phase syndrome, you can probably sleep fine once you fall asleep. The problem is, you’re not likely getting enough sleep for optimal health.

One other common sign of the condition is depression or at least depression symptoms.

If you have the symptoms mentioned above, you should discuss them or any other sleep-related issues with your doctor. Physicians don’t always ask about your sleep, instead focusing on diet, exercise, smoking, and the management of any other diagnosed medical conditions. But sufficient, quality sleep is vital to good health.

To diagnose the problem as something other than insomnia, you may be asked to keep a sleep log that includes information about when you go to sleep, when you wake up, any trouble falling asleep, feelings of sleepiness during the day, and any other relevant details (exercise, daytime naps, etc.). In many cases, the logs and symptoms are enough to identify the problem. But further investigation with a delayed sleep phase syndrome test may be helpful.

A sleep disorder test may also include an overnight sleep study called a polysomnogram. The study is done in a sleep center, in which electrodes and other equipment monitor the electrical activity of your heart and brain, oxygen levels in your blood, your breathing and heart rates, and how much time you spend awake and in various sleep stages overnight. It’s primarily to look for other sleep disorders.

Your doctor may also recommend you wear a wristwatch-like device called an autograph, which measures your waking rhythms over a period of several days.

While there is no cure for delayed sleep phase syndrome, the condition can sometimes be effectively managed with the help of light therapy. You would be exposed to bright lights in the morning and dim lighting before bed to help restore your circadian rhythms.

You might also be advised to try slowly scaling back your bedtime.

If these treatments aren’t effective, you may find that you outgrow the problem. If your work/school/home life allows for a later bedtime and later wake-up time, then as someone with delayed sleep phase syndrome, you may not have any problem with it. e. But if it interferes with your life and daily functioning, you should talk with your doctor or a sleep specialist to see how best to manage it.

Test your knowledge of DSPS with this delayed sleep phase syndrome questionnaire.

False: You may have delayed sleep phase syndrome if your sleep is delayed by just two hours past most people’s usual bedtime. If allowed to wake up on their own, most people with DSPS would then sleep in at least two hours later than the general population. Problems occur when someone with DSPS falls asleep later, but must wake up early for school or work.

True: Estimates vary, but researchers believe between 7 and 16 percent of adolescents have DSPS sleep. One theory is that the condition occurs when the body’s internal clock adjusts after puberty.

False: Most people with DSPS have no other sleeping issues. Once they fall asleep, they tend to enjoy a restful, good-quality night’s sleep.

True: Bright light therapy is a common tool in helping people reset their internal clock, also known as their circadian rhythms. Exposure to bright light in the morning can help train the body to be more awake in the morning so that by nighttime, the body is ready for sleep. A special light box should be used. A doctor trained in sleep medicine should be able to recommend a good product and how to safely and effectively use it. However, bright lights right before bedtime, whether from lamps and overhead lighting, or from computer, phone or television screens, should be avoided. These lights can stimulate brain activity and interfere with sleep.

False: DSPS is usually diagnosed based on an individual’s description of symptoms, including sleep and wake times, daytime sleepiness, mood changes, and difficulty focusing at school or work. Sleep logs are also very useful to track a person’s sleeping patterns. An overnight sleep study may be used to rule out other sleep problems, such as restless leg syndrome or obstructive sleep apnea.