Home » Daily » Nutrition » What Is Leptin? It May Be the Key to Unlocking Fat Loss 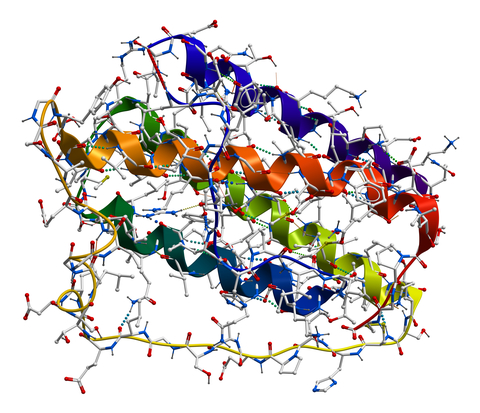 Officially discovered in 1994, leptin is a hormone that has quickly become known as a central player in controlling body fat Soon after, pharmaceutical companies rushed to get leptin-like drugs to market, thinking they finally had the miracle weight loss pill that could end the obesity epidemic (and make them billions of dollars). However, the story on leptin turned out to be far more complicated. To get started, let’s first answer the question “What is leptin?”

Leptin is produced and secreted by fat tissue; the amount produced depends on how much fat you carry. As you gain fat, the amount of leptin you produce increases; as you lose fat, the amount decreases. (See also our post “Leptin Foods: The Answer to ‘Why Am I Always Hungry?‘”)

What Is Leptin Doing in the Brain?

Once produced, leptin enters into the body’s circulation where a transport protein carries it from the bloodstream into the brain. In the brain’s hypothalamus, leptin affects the neurons in charge of increasing and decreasing fat storage. Leptin suppresses the program designed to increase body fat and activates the program to decrease it.

Leptin acts as the major feedback signal that keeps weight in the body’s preferred range. This narrow window, or set point, is what allows people to maintain a relatively stable weight without consciously adjusting food intake. Thus, if fat mass increases, hunger diminishes and the body tries to burn calories to regain its preferred equilibrium. Conversely, if fat mass decreases, less leptin is produced and the balance shifts to increase fat storage.

Given the fact that this feedback loop inhibits fat storage in response to fat gain, it doesn’t seem like anyone could become obese. If the leptin feedback loop was working correctly, you would think it would be hard to gain weight in the first place. And if you did put on weight, it seems that this properly working mechanism would then help you lose it in order to return you to your natural set point. Why, then, do so many individuals become obese, and why is it so hard to lose weight and keep it off? The answer is leptin resistance.

What Is Leptin Resistance?

To understand why it’s so easy to gain weight and so hard to lose it, you need to understand leptin resistance. Some people (including almost everyone with obesity) become resistant to leptin, so that the brain no longer responds to the fat tissue’s message that it’s already full. Although it is properly secreted by fat tissue into the bloodstream, the leptin either can’t get across the blood-brain barrier, or the brain itself becomes insensitive to it. In essence, the brain thinks the body is starving even though it is not.

Leptin resistance is almost always present with obesity. Despite the fact that people with obesity have high leptin levels (because of their high fat stores), the brain is oblivious, instructing the body to act as if leptin levels are low by increasing eating, decreasing metabolic rate, and increasing fat storage. This glitch in the feedback loop sets the stage for even more weight gain, insulin resistance, impaired blood sugar regulation, high cholesterol and triglycerides, diabetes, and cardiovascular disease.

It also means that losing weight and maintaining weight loss is even more difficult. Leptin resistance is associated with a new homeostatic set point in which body fat, leptin, and food intake are all higher. The brain defends this new set point against changes, just like a lean person’s set point is defended against changes.

It turns out that the health of your gut also plays a role in inflammation in the hypothalamus. The condition commonly known as leaky gut (and more formally known as increased intestinal permeability) allows inflammatory compounds to leak through the gut’s barrier into the circulation, irritating the hypothalamus as well as other tissues. A number of factors are known to increase intestinal permeability. In addition to high-calorie, high-fat (lard), high-sugar diets, gluten is getting a fair share of attention. Gluten is now known to increase gut permeability and make its way into the bloodstream, even in people without celiac disease and who don’t report gluten intolerance or sensitivity. With this in mind, many research groups have been studying whether gluten may cause leptin resistance.

How to Increase Leptin Sensitivity for Automatic Fat Loss

So, are people with leptin resistance doomed to a lifetime of fruitless fat loss efforts or can leptin resistance be reversed so that weight loss can be easier and more sustainable? We still don’t have a definitive treatment for leptin resistance, but there are hopeful signs from the latest research that certain dietary and lifestyle changes and natural therapies can help return the brain to a leptin sensitive state.

In our companion piece, you’ll read about how to increase leptin and provide actionable steps, based on the latest leptin research, that you can start taking right now to boost fat loss.