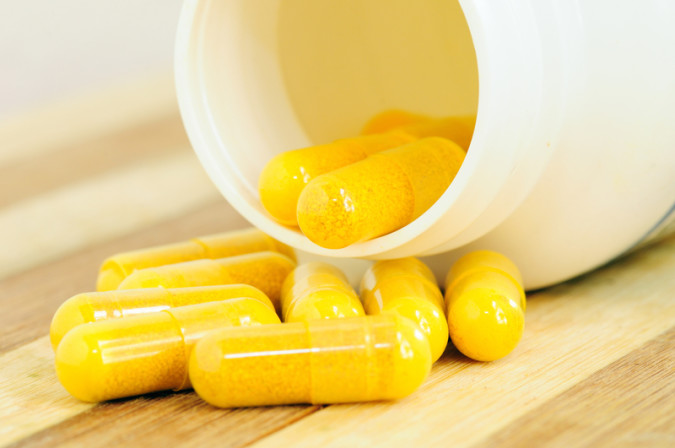 Curcumin, shown in capsule form here, h as been shown to reduce inflammation in the brain, regulate the brain’s immune system, and boost brain levels of the antioxidant glutathione.

Researchers have identified a number of herbal and nutritional supplements that can prevent or slow the progression of memory loss, mild cognitive impairment, and Alzheimer’s disease. But four stand out as being especially effective. Because symptoms don’t manifest until  years or decades after they begin, these four supplements for cognitive health and dementia are more effective the earlier they are used.

Curcumin is the compound that gives turmeric, the popular curry spice, its vibrant yellow color and has been shown to protect against neurodegeneration and mild cognitive impairment. It works by reducing inflammation in the brain, regulating the brain’s immune system, and boosting brain levels of the antioxidant glutathione. It’s important your curcumin supplement contain black pepper, which helps with bioavailability. The piperine in black pepper inhibits the breakdown of curcumin in the intestines so it has longer to be absorbed.

Also, keep in mind that one of the challenges with curcumin is that humans have an extremely poor absorption of curcumin in the gastrointestinal tract. When we take a powdered form (as capsules), the curcumin itself is not absorbed but breaks down into a number of metabolic products that are much less beneficial than the curcumin itself.

However, mixing curcumin with fish oil, coconut oil, or extra virgin olive oil greatly increases absorption—up to seven times improvement. Just take your curcumin capsule, split it open, and empty it into a spoon containing the oil and then stir that into water to consume.

If you don’t want to fool with that mixing mess and want a relatively inexpensive supplement form, use the curcumin phytosome complex supplements that are readily available. Recent research has shown that this form’s bioavailability in the human body is approximately four times better than plain curcumin.[1]

2. Resveratrol, An Antioxidant for Fighting Inflammation and Brain Health
Another anti-inflammatory powerhouse is resveratrol, the compound found in the skins of grapes and also found in Japanese knotweed. In addition to combating inflammation and acting as a potent antioxidant, resveratrol has also been shown to increase blood flow to the brain, stimulate brain growth and synaptic connections, inhibit plaque formation in the brain, and reduce the damage caused by strokes, inflammation, and seizures. Animal studies show it protects against mild cognitive impairment and Alzheimer’s disease.

Resveratrol and curcumin are each powerful on their own, but researchers have found that when taken together, they work synergistically to become even more effective. Therefore, try taking a combination of these two supplements.

Also, be sure to look for the more stable and bioactive form of resveratrol called trans-resveratrol and follow the dosing instructions on the manufacturer’s label.
[2-4]

Phospholipids are fats that make up the membranes of cells. Phosphatidylserine is a phospholipid that determines how well cell membranes communicate with each other. Low phosphatidylserine (pronounced FOS-fuh-TIE-dil-sair-een) levels are associated with memory loss and depression.

Studies have shown phosphatidylserine can significantly improve cognitive function, including in people with mild cognitive impairment and Alzheimer’s disease. It is very protective of the hippocampus, the area of the brain associated with learning and memory.[5-9] So, in addition to curcumin and resveratrol, a daily intake of phosphatidylserine (PS) supplements can also help protect your memory. In studies, doses of 100 mg, three times daily, have been used to treat Alzheimer’s disease, dementia, and age-related declines in cognitive function.[10]

A deficiency in magnesium has been linked with memory impairment, slow recovery after a brain injury, and accelerated aging of brain cells. While magnesium citrate, glycinate, or malate are often recommended, researchers say they don’t cross the blood-brain barrier and therefore, are not effective. However, a newer, synthetic form of magnesium called magnesium-L-threonate has been shown to cross the blood-brain barrier, enhance memory and prevent impairment, thus lowering the risk of mild cognitive impairment.

In one study of both young and old rats taking the compound, the cognitive performance of older animals was equal to that of the younger animals. In other words, it had a greater effect on the older animals. This is critically important; it means it’s never too late to reclaim your brain health. The nutrient also doubled long-term spatial memory in both the young and old animals.

Magnesium L-threonate supplementsare readily available in most all of the large online supplement supply shops. (Bear in mind the magnesium-L-threonate studies were done on rats and so far there are no published studies on humans.[11-13])

If you have a family history of Alzheimer’s disease or any form of cognitive impairment, you know the heartache and devastation this causes to the affected individual but also to their family members and friends. Once the disease manifests itself, it is so much harder to treat. So if you want to prevent these debilitating diseases for yourself, the time to start supplements for cognitive health is in your 50s, not your 70s (but it is never too late to start).

The cost of the supplements for cognitive health is a small price to pay for the benefits you and your family will receive down the line. And please don’t think that some pharmaceutical drug will bail you out. These drugs are largely ineffective and only delay the progression of the disease by six months or so. So get started now.

You can learn more about these and other natural remedies to boost memory by browsing our Memory section.

*If you are taking any prescription medications, be sure to talk with a doctor or health professional before beginning a new supplement.