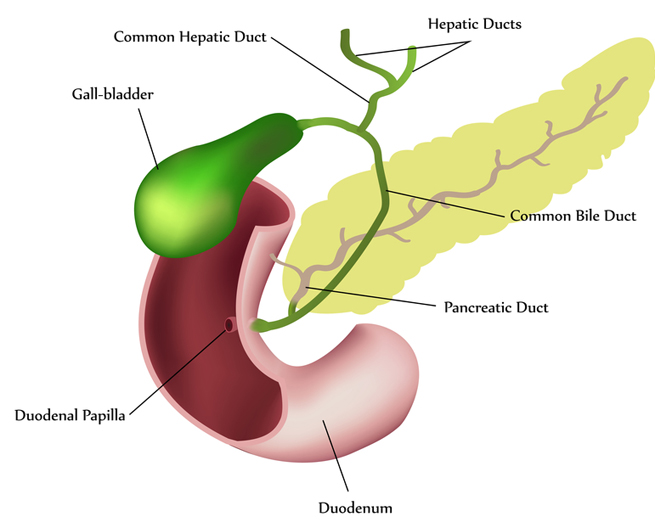 What causes gallstones? Although the process is not fully understood, gallstones occur due to an imbalance in the substances that make up bile: cholesterol, bilirubin, and bile salts.

Gallstones are solid deposits in the gallbladder, a small pear-shaped organ that sits beneath the liver. The gallbladder has a simple function: to store and concentrate bile, a digestive enzyme made by the liver. In the United States, between 1 and 3 percent of adults develop gallstones each year and about 500,000 people develop symptoms or complications requiring gallbladder removal, or cholecystectomy. But what causes gallstones?

Gallstones—the medical term is cholelithiasis—can range from the size of a grape seed through to that of a golf ball. An individual may develop one stone, several, or even hundreds. Most people are unaware that they have them until a “stone” starts to move into the ducts that connect it to the bowels, and they develop a blockage bile duct or inflammation of the gallbladder (cholecystitis), a condition sometimes known as a gallbladder attack. Symptoms of a gallbladder attack may include severe pain in the upper abdomen, nausea, vomiting, sweats, fever, and chills.

Although the process is not fully understood, gallstones occur due to an imbalance in the substances that make up bile: cholesterol, bilirubin, and bile salts.

What Causes Gallstones? Pathophysiology Reveals What Goes Wrong in the Body

Imagine you have a bucket of water and you add a little soil and stir it. The soil will dissolve, turning the water into a brown solution. If you keep adding more and more soil, there will reach a point where no more soil can dissolve: The solution becomes saturated and a sludgy sediment begins to form. This is like the gallbladder, only when the fluid in the gallbladder becomes saturated with cholesterol or bilirubin, crystals begin to form in the “sludge,” and they then grow into gallstones. If there are enough bile salts, crystals will be dissolved and gallstones prevented.

Most gallstones develop in the gallbladder and cause problems as they pass through the bile duct, but occasionally stones form within the bile duct—common bile duct stones.

There are three types of gallstones:

Who Is at Risk of Gallstones?

There is an expression that those who develop gallstones are “fair, fat, female, and forty.” While this is a gross generalization, there is an element of truth for some of these “Four Fs.”

Risk factors for cholesterol stones include:

According to research, there are many risk factors for gallstones that you cannot change, but maintaining a healthy weight, exercising regularly, and eating a healthy diet may reduce your risk, a little.