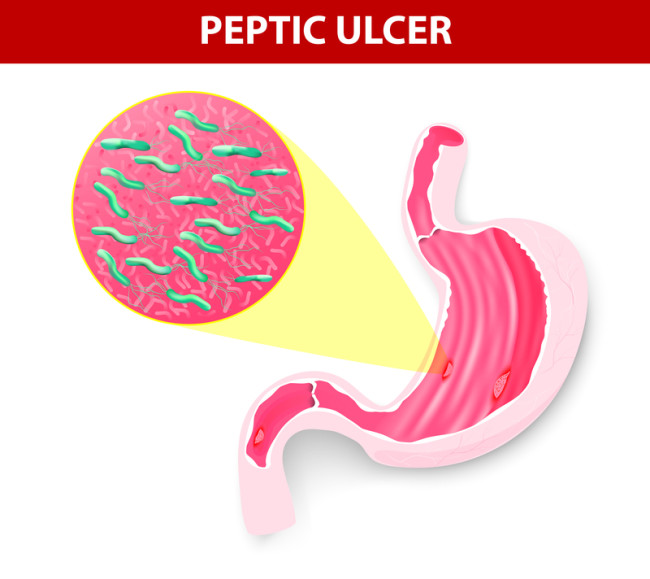 A peptic ulcer is a sore on the lining of the stomach or duodenum; it's often caused by a type of bacteria known as H. pylori or by a medication.

Most people have an occasional stomachache or a burning sensation in their chest from time to time, but how do you know when peptic ulcer symptoms may be at play? A peptic ulcer is a sore that forms on the inner lining of the upper gastrointestinal (GI) tract, from the esophagus to the upper section of the small intestine.

Ulcer symptoms may include:

If an ulcer is severe, it may bleed. Symptoms of a bleeding ulcer include vomit that contains blood or looks like coffee grounds, and stools (bowel movements) that contain blood or that look black or tarry.

It was once believed that eating spicy foods caused ulcer symptoms, but research has found that the majority of peptic ulcers are caused by a type of bacteria called Helico-bacter pylori (H. pylori, for short) or by a medication.

It is estimated that more than half of the world’s population has H. pylori. For some people, H. pylori causes no problems, but for others, it produces infection and ulcers. (See our post on natural treatments for H. pylori-related issues.)

Medications that may cause ulcers include:

Taking a medication intended to treat indigestion or heartburn may provide temporary relief of ulcer symptoms. These medications include:

Ulcer symptoms are similar to signs of other problems that may occur in the gastrointestinal system. If you experience any of these symptoms, it’s important to see your doctor so he or she can evaluate the cause. (See also our post “What Is GERD? Dealing with Gastroesophageal Reflux Disease.”)

If you have a peptic ulcer, seek treatment to prevent complications, which can include internal bleeding, an infection in your abdominal cavity (caused by a perforated ulcer that has eaten though the wall of the GI tract), and formation of scar tissue that can prevent food from moving through your digestive tract.

Once your ulcer has been successfully treated, your ulcer symptoms will improve.

In this question-and-answer from Duke Medicine Health News, we offer more detail on the topic of duodenal ulcers, a type of peptic ulcer.

Q: What are duodenal ulcers? Is there treatment for these?

The first sign of an ulcer is usually a burning sensation in the upper to middle abdomen that occurs within one to two hours after a meal; it also may cause bloating, belching, heartburn, nausea, or intolerance to fatty foods. The most common causes of peptic ulcers are infection with the bacterium Helicobacter pylori (H. pylori) and long-term use of aspirin and certain other painkillers, such as ibuprofen (Advil, Motrin) and naproxen sodium (Aleve, Anaprox), but not acetaminophen (Tylenol).

Stress and spicy foods do not cause peptic ulcers but they can exacerbate your symptoms. Occasionally, ulcers can cause severe symptoms, like blood in vomit or stools or trouble breathing, and can lead to gastric cancer. Since 1982, when researchers discovered that many peptic ulcers are caused by the H. pylori bacterium, antibiotics and medicines that decrease stomach acid have been the main treatment.