The word ?ulcer? refers to a sore. Ulcers are sores in the stomach (gastric ulcer) or upper part of the intestines (duodenal ulcer). They?re caused by stomach acid that wears away at the stomach or intestinal lining.

Most people who develop ulcers don?t have any symptoms at first. When ulcer symptoms do begin, they usually involve pain in the upper part of the abdomen. The pain may feel dull, and it can come and go or persist for days or weeks. Sometimes eating relieves the abdominal pain, and sometimes food makes it worse.

To diagnose an ulcer, the doctor may do an esophagogastroduodenoscopy (EGD), in which a flexible tube with a camera on the end is inserted into the mouth and lowered to let the doctor see the stomach and beginning of the small intestine. An upper GI series, which involves x-rays of the esophagus and stomach after drinking barium, may also be done.

Ulcers are treated with proton pump inhibitors or H2 blockers?two medicines that reduce stomach acid production. Often, ulcers are caused by an infection with H. pylori bacteria. Antibiotics can treat this infection.

A peptic ulcer is a sore that forms in the lining of the stomach (gastric ulcer) or the first section of the small intestine (duodenal ulcer). Gastric ulcers can occur anywhere in the stomach, but are most common in the lower part (antrum). Duodenal ulcers occur in the first few … Read More 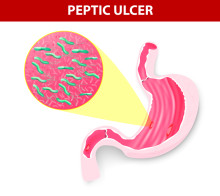 Ulcer Symptoms? Report Them to Your Doctor for Timely Treatment

Most people have an occasional stomachache or a burning sensation in their chest from time to time, but how do you know when peptic ulcer symptoms may be at play? A peptic ulcer is a sore that forms on the inner lining of the upper gastrointestinal (GI) tract, from the … Read More 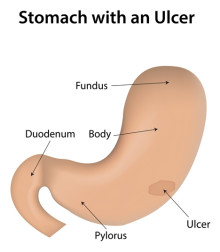 What’s Behind Your Stomach Ulcer Symptoms?

If you’re experiencing a stomachache or what could be stomach ulcer symptoms, you should know that there are many types of ulcers and many places within the digestive system in which they can occur. For instance, peptic ulcer symptoms start with a sore that forms in the lining of the … Read More