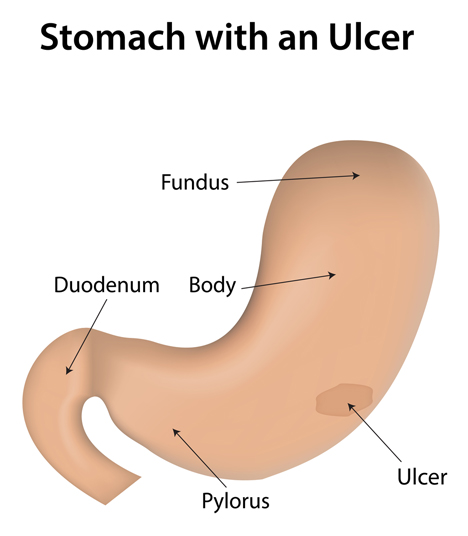 Diagnosis of a stomach ulcer typically involves either an upper gastrointestinal (GI) series or an endoscopy.

If you’re experiencing a stomachache or what could be stomach ulcer symptoms, you should know that there are many types of ulcers and many places within the digestive system in which they can occur.

In the past, it was thought that ulcers were caused by stress, spicy foods, or an overabundance of stomach acid. It’s now known that amongst the main causes of ulcers is an infection with the bacterium H. pylori. Long-term use of NSAIDs also can cause ulcers. Older adults are more likely to have ulcers, which may be because they have a higher infection rate with H. pylori or because they use more NSAIDs.

The first stomach ulcer symptom is usually a burning sensation in the upper to middle abdomen within one to two hours after a meal. Other symptoms of an ulcer may include:

Some stomach ulcer symptoms warrant emergency medical attention because they indicate that the ulcer has caused a perforation in the stomach or duodenal wall, broken a blood vessel, or blocked the path of food leaving the stomach and entering the intestine.

If you experience bleeding ulcer, characterized by any of the following symptoms, seek medical help right away:

To diagnose an ulcer, the first test performed will probably be either an upper gastrointestinal (GI) series or an endoscopy. An upper GI series is an X-ray of the esophagus, stomach, and duodenum. If there is an ulcer, testing for H. pylori bacteria follows.

Treatments for ulcers are highly effective. The three goals to treat ulcers caused by bacteria are to reduce stomach acid, protect the stomach lining, and kill the bacteria. This triple therapy allows the ulcer to heal and lowers the chance that it will come back. Antibiotics are used to destroy the bacteria. Reducing stomach acid is generally accomplished with a proton pump inhibitor (PPI), and sucralfate and bismuth are typical medications to protect the stomach lining.