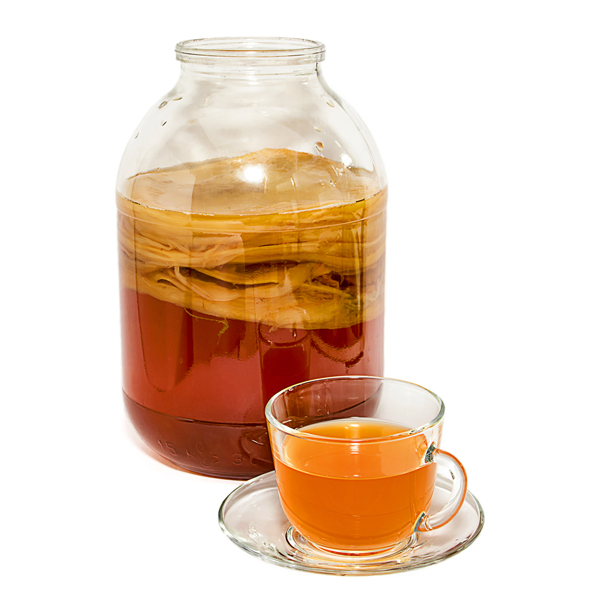 What exactly is kombucha? "Starting with a pot of sweet tea, a SCOBY (symbiotic culture of bacteria and yeast) is added to the brew and left alone for a week," according to the Kombucha Brewers International. The result is a tangy-sweet beverage that the organization calls "living nutrition."

Kombucha is a sweet, slightly bubbly, mildly acidic fermented tea reminiscent of sparkling cider. The ancient medicinal brew is one of the fastest-growing products in the “functional beverage” market, touting a rich mix of beneficial microorganisms and antioxidants. Proponents tout kombucha’s benefits for aiding in digestion, fighting harmful bacteria, reducing inflammation, and moderating blood sugar spikes after meals. But what’s in this stuff—and what’s behind the health claims?

How They Make Kombucha

Kombucha was developed in China in the 2nd century BC. It’s also known as Manchurian tea. It can be made from either black or green tea. Kombucha is a living beverage, produced by a “biofilm” of yeast and bacteria floating on top of the brewing liquid. Kombucha insiders call it a SCOBY: symbiotic culture of bacteria and yeast.

The SCOBY resembles a wrinkled, fleshy pancake floating on the fermenting “soup.” This explains why the beverage is sometimes called “mushroom tea”—even though no actual mushrooms are used to make it.

A piece of existing SCOBY can be used, like a pinch of sour dough bread starter, to initiate fermentation of the tea-and-sugar mix. After fermentation, kombucha is bottled and allowed to build up some of its fizz. Kombucha brewers cool the tea to put the brakes on fermentation. 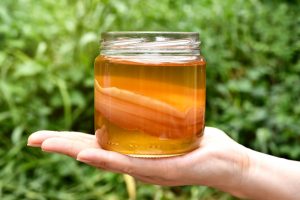 The wrinkled, fleshy “pancake” you see floating in fermenting kombucha is often referred to as a mushroom, but there are no mushrooms (or pancakes!) used in making this healthy brew.

The basic nutritional content of kombucha is fairly benign, including a moderate amount of sugar. Most products listed in the USDA Food Composition Databases contain between 2 and 4 grams of total sugar per 1-cup (8-ounce) serving. A few outlier products reach 9 or 10 grams (equivalent to 5 teaspoons of sugar).

Now compare kombucha’s sugar content to that of bottled or sweetened retail coffee drinks. Some of those pack up to 20 grams of sugar per 8-ounce serving (40 grams in a more typical 16-ounce serving).

Concerned about calories and sugar in commercial kombucha? Read the Nutrition Facts label.

Kombucha is touted to have many medicinal properties. Some are based on credible research on human health, but others are a bit of a reach.

Kombucha contains probiotics—live, active bacteria, like the bacteria in yogurt. Probiotics have been linked to better heart health, less risk of obesity, lower rates of diabetes, and other health benefits. These claims are not proven beyond doubt, but are at least credible based on research on humans.

Unfortunately, many of these “too good to be true” health claims are based on preliminary laboratory studies and research on rats. Bench-top and animal research are essential preliminary steps before human studies, but you can’t use them to confidently make decisions about your diet.

Producers of processed kombucha products are accountable for the safety of their products, which are regulated by the U.S. Food and Drug Administration (FDA). But there is also a thriving home-brew community outside the reach of federal regulations. Although most kombucha home brewers practice their hobby safely, a small number of studies have linked serious illness to drinking kombucha, including allergic reactions, liver and kidney toxicity, dizziness, nausea, and vomiting. The problems may have stemmed from improper brewing or handling of the kombucha.

If you want to make your own kombucha, get the recipe from a reputable source and follow directions carefully. One credible source is The Big Book of Kombucha (2016) by Hannah Crum and Alex M. LaGory. Crum, a national kombucha expert, cofounded the leading industry trade organization, Kombucha Brewers International.