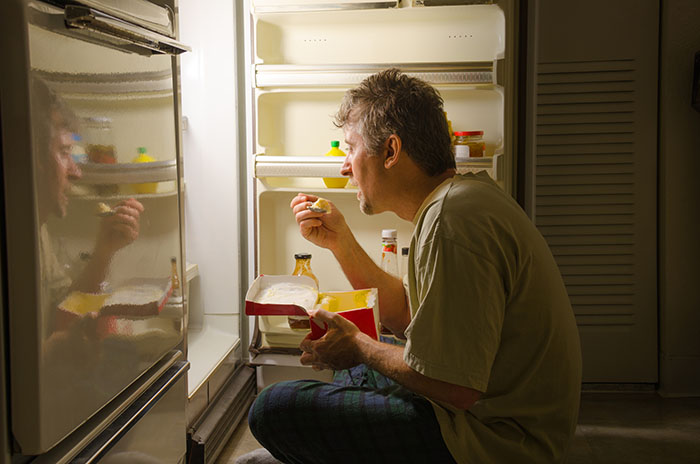 Eating late at night can result in elevated triglycerides and cholesterol levels, weight gain, and other issues. And for women, a recent study found that those with early-stage breast cancer are less likely to have their cancer return if they fast for 13 hours every night.

Late-night meals and midnight snacks aren’t uncommon. Whether you get home late from work and have to eat dinner when you’re usually going to bed, watch a movie late and snack on popcorn, or feel the need to graze on food to stay awake on a late study night, there’s a temptation to eat during the nighttime hours. Is this harmless, or is it bad to eat at night? Science consistently has told us it’s an unhealthy habit.

Why Is It Bad to Eat at Night?

Our bodies have a circadian rhythm: a 24-hour cycle that affects everything from our energy levels and metabolism to the way our organs function. We are wired to be awake and to eat during the day, and to sleep at night, when it is dark.

But if we alter our natural rhythm by working night shift, being exposed to light at night, or eating at night (particularly junk food), it can interfere with normal circadian function.[1,2] A host of negative changes can occur in the body particularly when we eat at night.

How Eating at Night Affects Your Health

Eating at night alters levels of insulin, glucagon, and leptin.[1]

Our body’s ability to use insulin to control blood sugar changes throughout the day, and it is least efficient at night. Glucose levels after meals are highest when meals are consumed late in the day.[4] Shift workers show decreased blood sugar control when eating food at night.[5] Researchers suggest avoiding meals with a high-glycemic index in the evening to avoid the negative effects and increased disease risk associated with high blood sugar.[4]

Human studies have shown that when we eat a significant portion of our total food intake in the evening, we are more likely to be obese.[1] One reason for this may be that there are regulatory elements for the circadian clock in our fat tissues, and disrupting those elements can lead to impaired fat storage.[1] Eating at night can also increase the total amount of food you eat each day, leading to more weight gain.[6]

Eating out of sync with our circadian rhythm can impact the way the body metabolizes lipids. This can lead to increased levels of both triglycerides and cholesterol. Read more about the link between nighttime eating and elevated lipid levels here.

Recent research suggests that our memory can be affected by eating at night. Researchers found that mice who were fed meals during the time they should have been sleeping experienced deficits in learning and memory.[7]

To avoid the negative effects of eating at night, eat dinner as early in the evening as your schedule allows. If you feel hungry later in the evening and need a snack, choose a small, high-protein snack like nuts instead of something carbohydrate-heavy. Avoid large meals within a few hours of your bedtime.

If you have to be awake at night, as with shift work, try to stick as close to regular mealtimes as possible. To read about some of the health risks associated with shift work, as well as tips for how to reduce your risk, read 6 Dangerous Effects of Working Night Shift.

Originally posted in 2016, this article is regularly updated.

Chelsea Clark is a writer with a passion for science, human biology, and natural health. She holds a bachelor’s degree in molecular and cellular biology with an emphasis in neuroscience … Read More

View all posts by Chelsea Clark