Home » Daily » Nutrition » How Does Alcohol Affect the Body? Drinking Before Meals May Cause You to Eat More 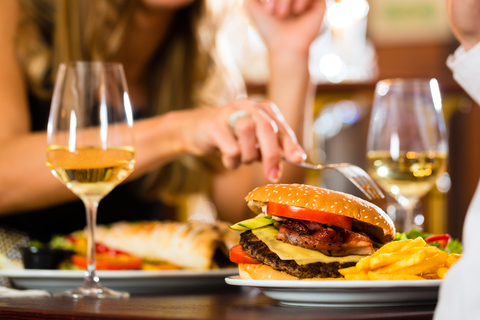 How does alcohol affect the body? For one thing, it increases your appetite, which can lead to a host of other issues.

How does alcohol affect the body? It’s common knowledge that many alcoholic drinks are high in calories (and often high in sugar). For this reason, people who are trying to lose weight may want to cut back on their drinking habits. But did you know that alcohol may contribute to weight gain for reasons other than just being a source of empty calories? Recent studies show that alcohol may increase your appetite, as well.

Some studies find that alcohol consumption is directly related to weight gain and higher body mass index (BMI), while others find no such association. And while the jury is still out on whether moderate drinking (a few drinks per day at most) impacts body weight, the findings are pretty conclusive that heavy drinking is clearly associated with excessive weight gain.[1]

While drinking alcohol in moderation can be okay in terms of body weight, there are many factors to be aware of, especially if you are trying to lose weight. First, drinking alcohol adds calories to your daily intake, without adding much nutritive value. But instead of these extra calories filling you up and making you eat less, alcohol may have the opposite effect.[1]

The Link Between Alcohol and Appetite

There are several studies suggesting that alcohol intake before a meal stimulates appetite and increases food intake later on in the meal. Researchers call this the apéritif effect.

Another study published in the journal Obesity found that women who were administered alcohol intravenously ate an average of 7 percent more food during their meal than women who were given placebo before the meal.

This study used direct administration of alcohol to the bloodstream to show that alcohol affects energy intake by mechanisms other than direct interaction with the gut and digestive tract. In fact, they found that after alcohol exposure certain areas of the brain were activated more when the participants smelled food odors, which may impact food intake and appetite.

It is important to note that there were individual differences in the study, with about one third of the women eating less after the alcohol.[3]

There are many explanations as to why alcohol may influence food intake and appetite. For example, it may partly be that we have a learned association between drinking and eating. It is likely that alcohol likely also amplifies appetite perception and reduces satiety signaling, through mechanisms involving the digestive tract, the endocrine system, and the brain. For example, researchers believe alcohol influences hormones related to satiety like leptin and grehlin, and that it may impact neurobiological pathways that involve neurotransmitters like serotonin and GABA.[1,2,3]

Alcohol Is Not All Bad

As you’ve learned here, alcohol doesn’t have to contribute to weight gain, but it may make sticking to a diet harder because it can affect appetite and food intake. Drinking too much alcohol certainly comes with other risks as well, such as and increasing triglyceride levels.

But it turns out that alcohol can also be good for you. For example, beer has some heart-healthy benefits, especially if you choose the healthier option of craft beer. Wine has many health benefits as well; it is a rich source of antioxidants, making it helpful for fighting heart disease, diabetes, dementia, and more.

When it comes to deciding whether or not alcohol is good for you and how much you should drink, the key is balance and moderation. Too much alcohol can lead to health problems, including being overweight. But light to moderate drinking can be okay, especially if it’s included as part of an overall healthy lifestyle.

Be sure to get regular exercise and eat a well-rounded diet full of vegetables. And try sticking to one to three servings of alcohol per day (a serving of 5 percent alcohol beer is 12 oz. and a serving of wine is 5 oz.).

Do you drink alcohol as part of your healthy lifestyle? What do you do to make sure your alcohol consumption stays in the healthy range? Do you find that when you drink, you eat more? Share your thoughts in the comments section below.