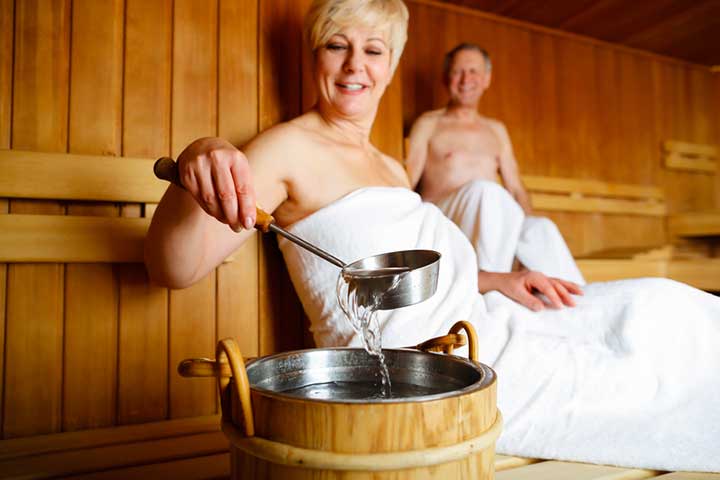 Sauna bathing may also lower systemic blood pressure due to overall relaxation of the body and mind.

Wikipedia says every house in Finland has a sauna, and it’s no wonder when you read about the many health-related sauna benefits.  Most recently, in January 2018, the University of Eastern Finland showed that 30 minutes in a sauna bath reduces blood pressure while increasing heart rate to the level of medium-intensity exercise. The findings were published in the Journal of Human Hypertension and the European Journal of Preventive Cardiology. That’s clearly a strong two-fer in sauna benefits, just for a 30-minute relaxing sit in a sauna.

Other research-based sauna benefits with regular use include a reduced risk of:

According to Medical News Today, sauna benefits can also include:

Sauna Benefits for the Mind

Frequent sauna bathing can reduce the risk of dementia, at least in men, according to another University of Eastern Finland study. In a 20-year study, men enjoying a sauna four to seven times a week were 66 percent less likely to be diagnosed with dementia than those with a weekly sauna. The more frequently saunas were taken, the lower was the risk of dementia. The findings were published recently in the Age and Ageing journal.

According to Jari A. Laukkanen, M.D., Ph.D., of the University of Eastern Finland, Kuopio, sauna bathing may protect both the heart and memory to some extent via similar, still poorly known mechanisms. “However, it is known that cardiovascular health affects the brain as well. The sense of well-being and relaxation experienced during sauna bathing may also play a role,” says Dr. Laukkanen.

More Sauna Benefits for the Men

Men who frequently use saunas may have reduced risks of fatal cardiovascular events and all-cause mortality, according to an article published by JAMA Internal Medicine.

The study found that the more frequently men had a sauna session the more they reduced their risks SCD, CHD, CVD, and overall mortality. The percentage listed in our chart is compared to men had just one sauna session per week.

The amount of time spent in the sauna seemed to matter, too. Compared with men who spent less than 11 minutes in the sauna, the risk of SCD was 7 percent lower for sauna sessions of 11 to 19 minutes and 52 percent less for sessions lasting more than 19 minutes. Similar associations were seen for fatal CHDs and fatal CVDs but not for all-cause mortality events. Further research is needed to establish “the potential mechanism that links sauna bathing and cardiovascular health,” the study concludes.

Rita F. Redberg, M.D., of the University of California, San Francisco, and editor-in-chief of JAMA Internal Medicine, writes: “Although we do not know why the men who took saunas more frequently had greater longevity (whether it is the time spent in the hot room, the relaxation time, the leisure of a life that allows for more relaxation time or the camaraderie of the sauna), clearly time spent in the sauna is time well spent.”

A Word of Caution

Before you decide you want these healthy sauna benefits and start investigating costs (figure $7,000 to $10,000 for a sauna room in your house; basic modular kits start at around $1,500), it’s important to realize that not all sauna benefits are truly good for everyone.

Those at risk of a cardiac event, other coronary problem, or hypertension should consult their physicians before enjoying a sauna.  The intense dry heat does get your heart rate up, as much as 30 percent according to some experts, which may not be ideal for some cardiac patients.

There’s a risk of dehydration in a sauna, so drink plenty of water when you’re enjoying your sauna benefits. Drinking alcohol is not advised. An older study published in the Annals of Clinical Research stated that, “Alcohol-related minor accidents such as sprains and burns are common in sauna, but more serious accidents also take place–head contusions, heat stroke after passing out in sauna and drownings while swimming. The exact number of these accidents is not known, but in Finland (population 4.8 million) the consumption of alcohol has been estimated to be a contributing factor in some 20 to 25 sauna-related deaths every year.”  While the research stated it’s unclear how this occurs, the ingestion of large amounts of alcohol may reduce blood pressure too far, causing fainting and accidents. It can also expose a person to cardiac arrhythmias.

A sauna is not a weight-loss tool, nor is there any scientific proof to the “detoxing” belief for sitting in a sauna.