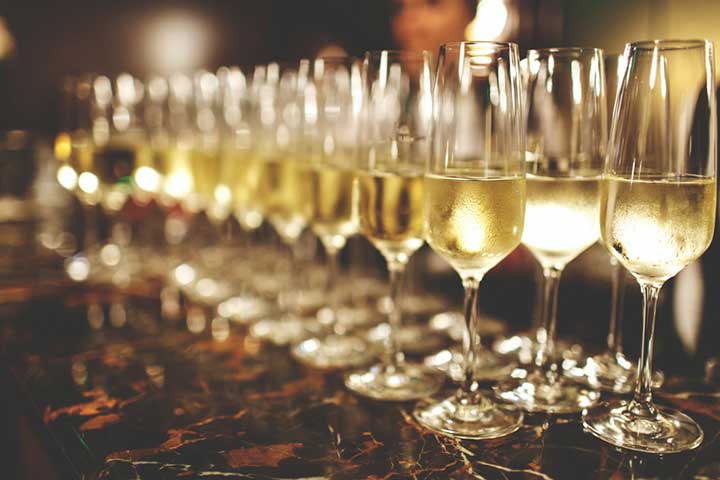 While two drinks per day decreases bone mass and strength and should not be ignored in terms of osteoporosis risk factors, smaller amounts of certain types of alcoholic beverages may actually have the opposite effect, making bones stronger.

Indulge in more than two drinks a day and your bones become less dense and more prone to break, increasing your risk of osteoporosis. The fact that too much alcohol weakens bones has been known for quite some time now. Since 2005, two large studies have confirmed alcohol as one of the commonly overlooked osteoporosis risk factors.

The first was a large study published in 2005 involving 11,032 women and 5,939 men which found that drinking more than one to two ounces of alcohol a day increased the risk of any osteoporotic fracture by 38% and hip fracture by 68%.[1] A second large study published in 2009, again involving thousands of men and women,  found bone mineral density was significantly lower (3.0–5.2% lower) in the hip and spine when more than two drinks a day were consumed.[2] What has not been known until recently is why, exactly, this occurs.

The answer turns out to have a lot to do with oxidative stress, the process in which the formation of damaging free radicals and other dangerous reactive oxygen species (oxidation) becomes greater than what the body can handle.

Alcohol increases oxidative stress and the formation of excessive numbers of reactive oxygen species throughout the body, including bone. In bone cells, too much alcohol and other osteoporosis risk factors like too much dietary fat and obesity are now known to cause damage because of oxidative stress.

The process of breaking down and re-making bone happens continually in the body and must be balanced in order for healthy bones to stay strong and resist fracture.  Because of oxidative stress and other disruptions it causes to bone cells, alcohol disrupts the normal balance between bone breakdown and formation, decreasing formation.

Ultimately this creates a situation in which bones can’t properly repair and renew, significantly increasing your risk of suffering a fracture.[3,4] With too much alcohol, just like with too much dietary fat, bone cells can’t keep up with the job of detoxifying the reactive oxygen species or repairing the resulting damage.

This can cause bone-building cells to self-destruct (in a process called apoptosis). In rats, the effects of alcohol on preventing bone formation can be completely reversed if they are given the dietary antioxidant n-acetyl-cysteine (NAC).[4] Whether antioxidants like NAC would have similar effects on osteoporosis risk factors in humans has not been studied.

While two drinks per day decreases bone mass and strength and should not be ignored in terms of osteoporosis risk factors, smaller amounts of certain types of alcoholic beverages may actually have the opposite effect, making bones stronger. Surprisingly, daily ingestion of one or two alcoholic drinks appears to be beneficial.

It actually protects bones, increases bone density, and reduces the risk of osteoporosis. Moderate drinkers (less than 29 drinks per month) actually had higher bone mineral density than abstainers when researchers looked at data from the Third National Health and Nutrition Examination Survey.

The type of alcoholic beverage consumed may also make a difference. In general, moderate intake of both beer and wine leads to the clearest benefits, while hard liquor’s effects are more inconsistent.[6]

Wine’s bone benefits may be linked to its high content of various phytochemicals, especially resveratrol in red wine, while beer is thought to improve bone health because of its high silicon content.[7,8]

Resveratrol in red wine has been shown to have estrogen-like effects and therefore is known as a phytoestrogen in addition to being a potent antioxidant. In rat studies, resveratrol has been shown to promote increased bone mineral density and to prevent fractures.[8]

In human stem cells, resveratrol promotes bone formation.[9] Although resveratrol is now widely available as a dietary supplement, no human studies have yet been conducted to examine its impact on osteoporosis risk factors in people.

To Drink or Not to Drink?

The take home message from these studies is this: don’t drink more than 2 alcoholic drinks a day.  This advice goes for both men and women, although some authorities recommend even less for women: no more than one alcoholic drink a day for females, and two for males.

Drinking more than this puts you at higher risk for osteoporosis. If you want to abstain altogether, don’t worry that you may be increasing your risk for osteoporosis; there are plenty of non-alcoholic ways to get potent antioxidants, phytoestrogens, minerals like silicon, and other compounds for strengthening your bones.

You can learn more about these natural remedies and other ways to decrease your osteoporosis risk factors by browsing our Bones & Joints articles.