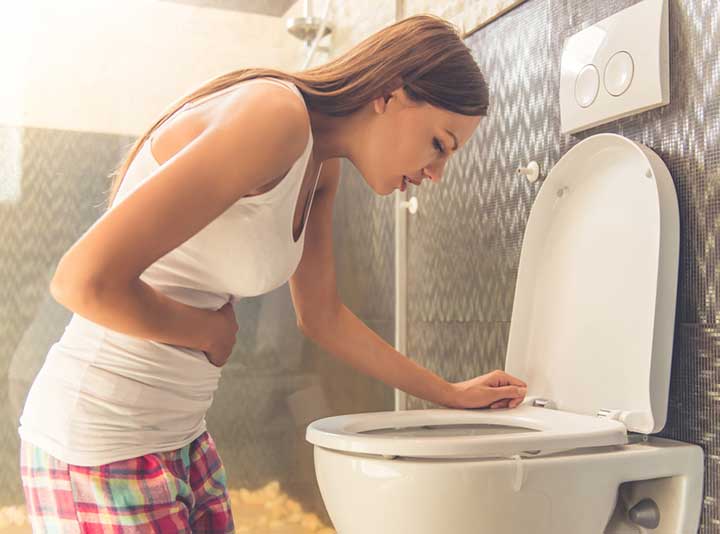 While battling the stomach flu, snack on crackers, toast, rice, and and bananas because they're gentle on your digestive system.

You’re going about your day as normal when you suddenly start to feel nauseous, weak, and slightly warm. You decide to drink a glass of water or a cup of tea for relief and when that doesn’t help, you lay down for a quick rest to regain your strength. Before you fully realize what’s going on, you’re running to the bathroom to vomit… or worse. Now you’re wondering if it’s the stomach flu or food poisoning. Which one is it?

In the same way that cold and allergy symptoms can often be confused, so can stomach flu and food poisoning symptoms. To learn about the differences between the two, it’s important to know exactly how each one develops.

The stomach flu, or gastroenteritis, is an intestinal infection that can be contracted from an infected person or by consuming contaminated food or water.

It’s important to understand that the stomach flu and the flu virus aren’t actually related. (If you think you’ve contracted the flu virus, check out our article, “11 Best Flu Remedies Backed By Scientific Studies“.) The two main viruses that can cause the stomach flu are noroviruses, which can be transmitted though food, water, or person-to-person contact, and rotaviruses, which are more common among children. Both types can be present in the body before symptoms appear and remain until days or weeks after symptoms have improved.

Stomach flu symptoms can begin to appear between 24 and 48 hours after exposure and can include:

While most healthy people can recover from the stomach flu without lasting effects, those with weakened immune systems, including infants and senior citizens, can develop life-threatening issues that require medical attention.

While any food can become contaminated and cause food poisoning, specifically consuming raw or undercooked foods, such as meat, poultry, eggs, sprouts, cheese, fish, oysters, milk, and rice, can further increase your risk of exposure. Symptoms of food poisoning can appear as quickly as two to six hours after your system has been exposed to the pathogen.

While food poisoning, like the stomach flu, can cause vomiting, diarrhea, cramps, and fever, it can also result in:

More severe cases of food poisoning can cause bloody vomit or stool, shock, and loss of consciousness.

While most food poisoning cases aren’t fatal, botulism can become life-threatening if not treated because it can impact the nervous system. Seek medical help immediately if you experience blurred or double vision, drooping eyelids, slurred speech, or difficulty swallowing.

One of the ways that the stomach flu and food poisoning are similar is that they normally don’t require any treatment. With either condition, it’s important to stay hydrated and get plenty of rest to recover as quickly as possible.

Where the two differ is how long it can take for an infected person to recover. Stomach flu symptoms can often last for as many as 10 days, while food poisoning symptoms typically only last about two days.

Once your appetite returns, it’s best to stick with a BRAT diet—bananas, rice, applesauce, and toast—at first because it’s easier for your body to digest. Abstain from caffeine, spicy or greasy foods, and alcohol until you’ve recovered. Also, avoid certain over-the-counter pain relievers, such as ibuprofen, because they can further irritate your stomach.

Your doctor may recommend over-the-counter drugs, such as Pepto-Bismol or Imodium, to help relieve diarrhea and nausea. If you’re looking for a natural alternative, try ginger for the nausea or oregano oil to help kill the bacteria causing your food poisoning symptoms.

Before the stomach flu slows you down, protect your immune system by taking the following precautions:

And to prevent yourself and your loved ones from food poisoning, follow these tips: