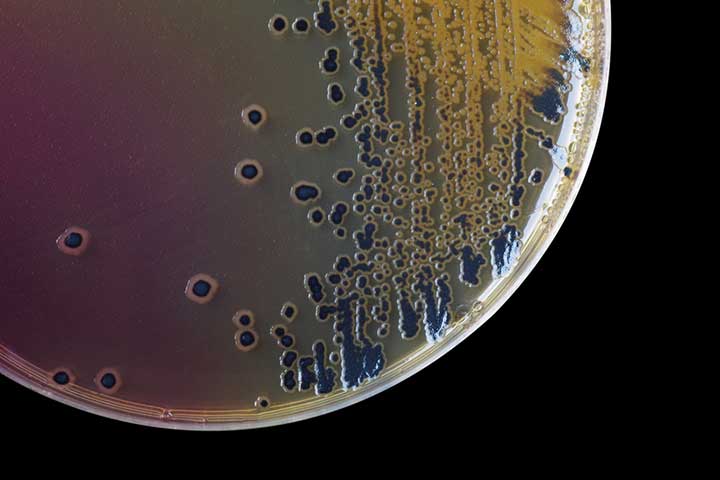 Although symptoms are not always present, common symptoms of salmonella poisoning include cramps, diarrhea, nausea, vomiting and fever.

You might think salmonella poisoning means contaminated salmon, but it doesn’t! Contrary to its name, it’s more commonly linked to chicken than fish. More specifically, salmonella (salmonellosis) is a bacterial infection that affects your gastrointestinal (GI) tract.

How Do You Get Salmonella Poisoning?

Salmonella bacteria live in the intestines of animals and humans, and are expelled through the feces. Any type of contact it makes with food or water can cause you to become ill. Salmonella infection is often classified as stomach flu, also known as gastroenteritis.

We can become infected with salmonella by drinking contaminated water or by consuming foods that are raw, undercooked, or have been contaminated with the bacteria—especially meat, eggs, and poultry. Meat is not the only culprit—the FDA warns you can contract the illness even from contaminated raw produce.

Traveling to countries with poor sanitation poses a significant risk. There are other ways, too, of contracting the illness. For example, there have been widespread U.S. outbreaks linked to pet reptiles. (Author’s note: I thought that concept was a myth, but after reading all about it, I think perhaps my children should kiss their dream of having a pet turtle goodbye.)

Which Foods Are Linked to Salmonella?

Animal products commonly linked to salmonella include raw meat, poultry, and seafood. Sadly, feces can make contact with raw meat and poultry during butchering processes. And seafood can be contaminated if it has been taken from contaminated water.

What about eggs? A few decades ago it was considered en vogue or even healthy to consume raw eggs. But evidence shows raw eggs are in fact unsafe. Infected chickens can produce eggs that contain salmonella. (Note that raw eggs are commonly used in mayonnaise and hollandaise sauce recipes.)

Produce that has been washed with contaminated water can become contaminated with salmonella. Imported produce has a greater risk compared to domestic products. Some spices have been linked to salmonella poisoning as well.

Contamination also can occur during food preparation when raw animal products come into contact with uncooked foods such as fruits and vegetables. Foods can become contaminated when food service workers do not properly wash their hands, cooking equipment, surfaces, and produce (fruits and vegetables) before food preparation. Mom certainly knew best when she told us to wash our hands before supper!

Salmonella Poisoning: What Are the Risk Factors?

Individuals with chronic health problems or a weakened immune system are at a greater risk of infection from food-borne illnesses. They also have a greater risk of complications. Some examples include those with digestive disorders, AIDS or sickle cell disease. In addition, complications from salmonella infection in pregnant women, infants and young children, older adults and transplant recipients can be dangerous.


What Are the Symptoms of Salmonella?

Although symptoms are not always present, common symptoms of salmonella poisoning include all the tummy trouble stuff—cramps, diarrhea, nausea, vomiting, and fever. These symptoms can last for anywhere from 12 to 72 hours after the infection occurs. Diarrhea can last longer—up to 10 days. In fact, your bowels can be “wonky” for a few months.

Most healthy people recover within four to seven days at home. H However, those with severe diarrhea may require hospitalization due to dehydration.

In addition to dehydration, reactive arthritis (Reiter’s syndrome) is another complication that can result from salmonella poisoning.

The World Health Organization (WHO) developed a health education program for food handlers and consumers called “Five Keys to Safer Food.” It has been helping people around the world prevent food-borne illnesses and make safer food choices.

The Department of Agriculture’s Salmonella Action Plan aims to keep testing programs for poultry and meat, and the poultry slaughter inspection system in check. The overall goal is to significantly reduce the number of salmonella infections in the U.S.

There are simple things you can do to prevent salmonella poisoning:

It is originally published in 2018. It is regularly updated.