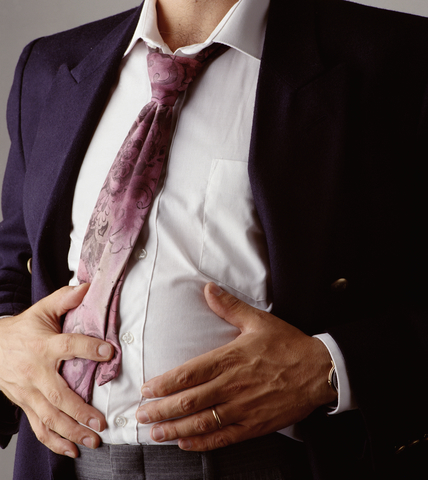 A University of Manchester study published in Cambridge Journal confirmed that low stomach acid is more to blame than too much stomach acid for the common indigestion symptoms associated with aging.[1]

What makes some people able to handle the occasional gastronomical indulgence while others seem doomed to pay a high price? The answer may lie in how much stomach acid that individual produces or whether they have shut off that production with “the purple pill,” thinking it’s the right thing to do for relief from indigestion symptoms.

The fact is that what causes heartburn and other signs of poor digestion may be the common age-related problem of low stomach acid. Another research study published in 2012 concluded there was a direct association between indigestion symptoms and low stomach acid, especially in the female patients who participated in the study.[2]

The condition of low stomach acid production is officially known as hypochlorhydria. When the Gastrointestinal Center at the University of Manchester in Manchester, England, conducted the aforementioned study on low stomach acid, its authors detailed recent discoveries about how aging affects digestive function. The researchers confirmed what many naturopathic and integrative medicine practitioners have been championing for years—that aging and other factors lead to decreased stomach acid production, and hypochlorhydria symptoms can cause not only uncomfortable digestive issues but more serious problems as well.[1]

According to the University of Manchester researchers, low stomach acid is the primary age-related change that occurs in the stomach and may predispose aging individuals to malabsorption or bacterial overgrowth further along the GI tract.[1]

Hydrochloric acid is normally secreted by the stomach to perform a very important function: to enhance the breakdown and subsequent absorption of the food and nutrients consumed. So part of the cost of low stomach acid is malabsorption or an inability to properly digest and absorb vitamins and minerals. This is not only what causes heartburn and leads to the indigestion symptoms, gastritis symptoms, and other symptoms described above; it also leads to osteoporosis, weakness, fatigue, cramps, anemia, and other nutritional disorders.

Stomach acid also serves a protective function, killing various pathogenic microorganisms that might otherwise cause infection in the gastrointestinal tract. The strong acid kills the various fungi and bacteria that are on the foods we eat. With too little stomach acid, you lack this protective function and you get an overgrowth of “bad” bugs, such clostridium difficile or candida in your GI tract. The result of low stomach acid is often a loss of the friendly bacteria, nausea, gas, bloating, diarrhea, constipation, and other symptoms.

Consult your primary physician to develop a plan to treat low stomach acid.