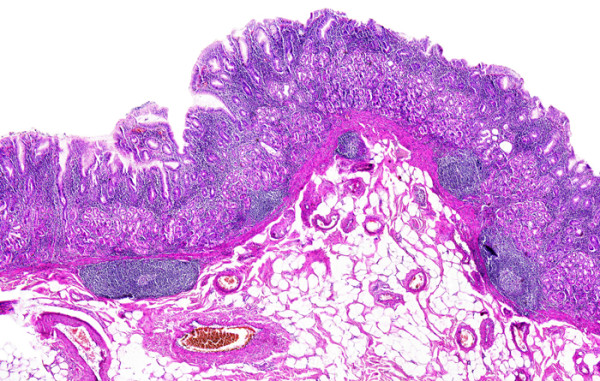 This highly detailed segment of a panoramic image shows the detail of gastritis in a human. The "photomicrograph" is pictured as seen under the microscope with a 10-times zoom.

Gastritis is not a single disease, but rather a condition with several possible causes. The term “gastritis” means inflammation of the stomach lining. When the body’s immune system detects injury (from infection or other causes), it produces gastric pain in the form of inflammation, which triggers processes that promote healing, such as scarring.

Gastritis healing occurs as the inflammatory process abates. If the cause of injury persists, there is continued immune response, which causes ongoing inflammation, and healing does not occur.

Some possible causes of gastritis include drinking too much alcohol, prolonged use of nonsteroidal anti-inflammatory drugs (NSAIDs), or infection with the Helicobacter pylori (H. pylori) bacteria.

Your doctor may suspect gastritis from your symptoms. However, because the symptoms can be similar to those of other gastrointestinal illnesses, the only sure way to diagnose gastritis is by examining the stomach with an endoscopy and taking a biopsy of the stomach lining.

Treatment depends on the cause. If infection with H. pylori is the culprit, antibiotic drugs can eradicate the bacteria. Research also suggests that eradicating H. pylori in people with chronic gastritis may reverse the damage to the lining of the stomach that can lead to cancer.

If the cause of gastritis is prolonged use of NSAIDs, these medications should be discontinued. Similarly, if overuse of alcohol is to blame, the solution is to stop drinking.

For most types of gastritis, drugs to reduce stomach acid—such as H2 blockers or proton pump inhibitors—may be prescribed. The reason is that stomach acid irritates the inflamed tissue in the stomach, and reducing its production can promote healing.

See also “Gastritis Relief: The Key Is to Treat the Root Cause.” 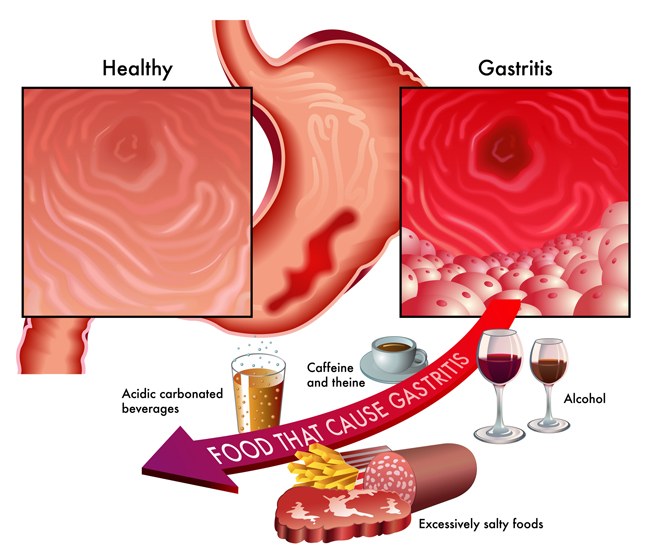 Originally published in 2016, this article is regularly updated by your University Health News editorial team.