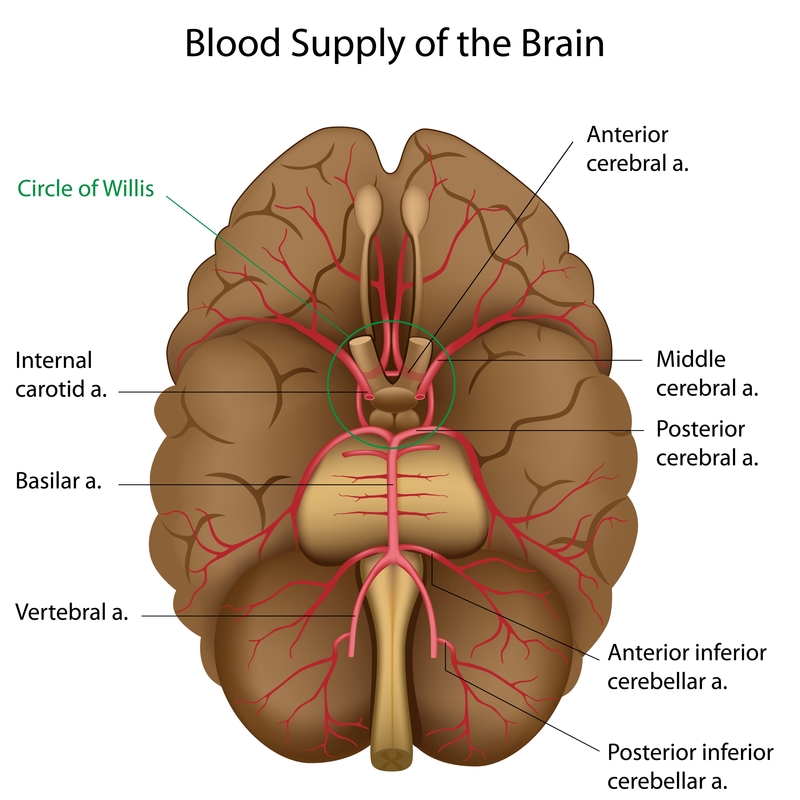 Collateral circulation through the circle of Willis helps maintain blood flow through the cerebrum, even when one or both carotid arteries are blocked.

Its Role In Ischemic Stroke

Ischemic strokes are generally the result of a blockage caused by cardiovascular disease (atherosclerosis). It would be reasonable to assume that a stroke will occur if the plaque obstructs blood flow, but that is not always the case, thanks to the circle of Willis.

Plaques develop in three phases. The first is called “initiation.” The lining of arteries (endothelium) is a smooth, inert surface that blood flows across. High cholesterol levels, high blood pressure, toxins in cigarette smoke, and other factors can damage the endothelium and stimulate the development of atherosclerosis.

Injured endothelial cells interact with white blood cells, which are part of the body’s defense against infectious organisms such as bacteria. White blood cells attack the invaders, help heal the injuries, and rid the body of cells that may have been irreparably injured or killed. This process, called inflammation, paves the way for the growth of new cells and tissues to replace those that were killed or damaged. Certain white blood cells help ensure that this process occurs in an orderly manner. But to get to the injury they must leave the blood and enter the tissues, which requires crossing the endothelium. Injured endothelium responds by becoming sticky to attract white blood cells.

Cholesterol is a type of fat made by your liver and absorbed from digested food. Your body needs only a tiny amount of cholesterol to make hormones, bile, and vitamin D. If unused cholesterol is not excreted, the body deposits it on artery walls.

LDL, VLDL, and chylomicrons carry fats from the gut and the liver throughout your body to meet the cells’ metabolic needs. HDL carries fats to the liver, which prepares it for removal from the body.

When the different lipoproteins exist in proper proportion, they are not a health risk. However, when total cholesterol or LDL-cholesterol levels rise, or the amount of HDL-cholesterol drops, the body starts depositing cholesterol in the arteries. Although triglycerides do not accumulate in arteries like cholesterol does, abnormally high levels of triglycerides are also associated with an increased risk of stroke or heart attack.

At least four things begin to happen as the plaque enlarges. First, some of the white blood cells inside the fatty streak begin to die, forming what doctors call a “necrotic core.” Second, the muscle cells of the artery wall begin to grow over the necrotic core. Third, blood cells called platelets begin to stick to the injured endothelium and facilitate the formation of small blood clots on the surface of the plaque. Platelets are an essential component of blood clotting in arteries. Normally, they circulate without doing much. But when they sense an injury that causes bleeding, they clump together to stop it by forming a plug. They also present a sticky surface that attracts actual blood clots formed from circulating proteins. As the plaque enlarges, platelets and blood clots get mixed in with the cells covering the necrotic core to form a fibrous cap. The cap is delicate and prone to rupture, releasing its contents into the bloodstream. This is a highly dangerous situation.

In the fourth stage of plaque development, certain cells in the slowly developing plaque deposit calcium inside the plaque—a process called “hardening of the arteries.

In a study of more than 3,600 patients with carotid artery disease, but no symptoms of stroke, only nine percent developed total blockages, and only one patient had a stroke. Three more developed a stroke about three years later. Why? Because collateral circulation through the circle of Willis helped maintain blood flow through the cerebrum, even when one or both carotid arteries were blocked.