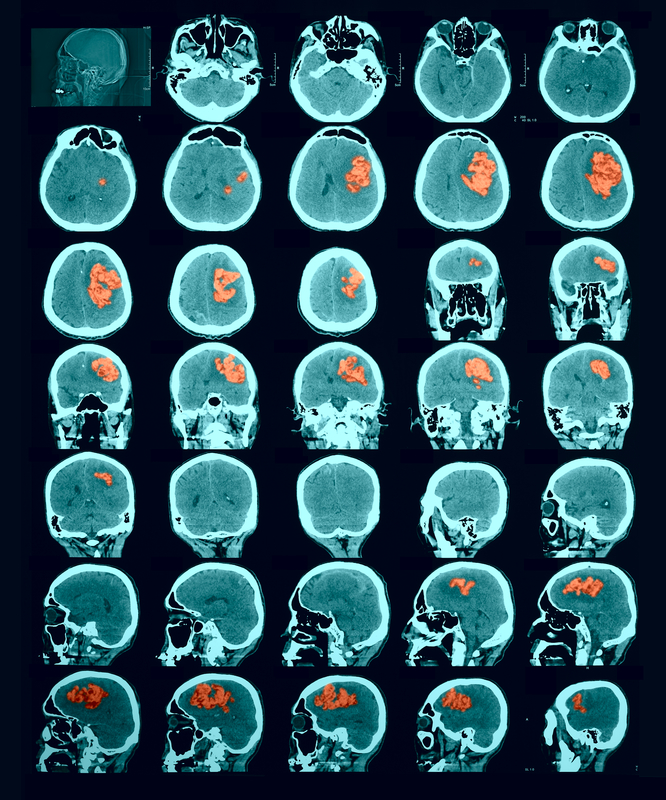 About 75 percent of the time, a hemorrhagic stroke (13 percent of all strokes) occurs within the brain itself.

When a weakened artery in the brain ruptures, blood flows into the brain, compresses the tissue and kills brain cells. This is a hemorrhagic stroke.

The most common cause of a spontaneous subarachnoid hemorrhage is a ruptured aneurysm. Other causes include high blood pressure, cerebral amyloid angiopathy, vascular malformations, head trauma, brain tumors, blood thinning medications, and other medical and neurological conditions that either weaken cerebral blood vessels or thin the blood.

An aneurysm is a balloon-like outpouching from a weakened area in the wall of an artery, typically at the base of the brain. Aneurysms are present at birth. Cerebral aneurysms are more likely to rupture in patients with a family history of ruptured aneurysms, and in those who currently smoke, have a large aneurysm, or suffer from high blood pressure.

Aneurysms most often form in arteries located at the base of the brain, particularly where the arteries divide, such as in the circle of Willis. It is believed that many aneurysms begin early in life and enlarge slowly until they suddenly rupture many years later. Smoking and hypertension increase the risk of rupture. About 20 percent of people with one aneurysm have several aneurysms. A person with a parent or sibling who has had an aneurysm is at increased risk.

Aneurysms may also form in smaller arteries that branch off the major arteries in the subarachnoid space. These microaneurysms usually cannot be seen on imaging. Most researchers believe that hypertension and smoking contribute to the development of microaneurysms.

A burst aneurysm is the most common cause of a spontaneous subarachnoid hemorrhagic stroke. When this occurs, the subarachnoid space begins to fill with blood. Symptoms include a sudden, intense headache, neck pain, and nausea or vomiting. If the pressure builds up rapidly and compresses parts of the brain, it may cause loss of consciousness or death. About half of all subarachnoid hemorrhage patients who arrive at the hospital alive die within 30 days. More than half of those who survive suffer major neurologic deficits or other complications.

Non-ruptured aneurysms are typically discovered incidentally on brain imaging performed for another condition. It is difficult to predict which aneurysms are prone to rupture. Physicians consider factors such as the size of the aneurysm, family history, and use of tobacco products in their decision to offer preventive treatment. This is often weighed against the risk of surgical treatment. As aneurysms grow, they may press on certain nerves or areas of the brain, disrupting their normal function. This may result in dilation of a pupil or loss of a light reflex in the eye, other vision defects, or focal pain in the head or neck.

When a hemorrhagic stroke occurs, the goal of the emergency care is to stabilize the patient and manage blood pressure by keeping it within certain limits and avoiding sudden fluctuations. If pressure inside the brain increases along with other measures, a drug called mannitol (Osmitrol) may be given to alleviate the swelling and reduce the pressure while surgical treatment is discussed.

For intracerebral or subarachnoid hemorrhage, there is no emergency treatment available to stop the bleeding. There is some potential in a surgical procedure in which a dime-sized hole is cut in the skull, a catheter is inserted into a cerebrospinal fluid-filled cavity deep in the brain, and tPA is delivered through the catheter to rapidly remove the blood from the ventricle and subarachnoid space. However, further study is required to assess if this technique improves clinical outcomes.

After an aneurysmal subarachnoid hemorrhage, there is a 30 percent chance of having another within one month. Surgical or interventional treatment of the aneurysm can lower the likelihood it will rupture again to less than one percent per year.

For patients with intracerebral hemorrhage, a clinical trial is evaluating whether aspirating the clot using a minimally invasive technique, and delivering tPA directly into the hemorrhage over three days, will improve outcomes. The trial, known as Minimally Invasive Surgery Plus rt-PA for ICH Evacuation, Phase III (MISTIE III), is expected to wrap up in 2019. It is hoped that the procedure will improve patients’ long-term quality of life.

The extent of your disability (if any) will be determined after the stroke has ended and your condition has been stabilized. The length of time you will need to recover from a stroke will depend on its severity. Many are permanently disabled to various degrees.