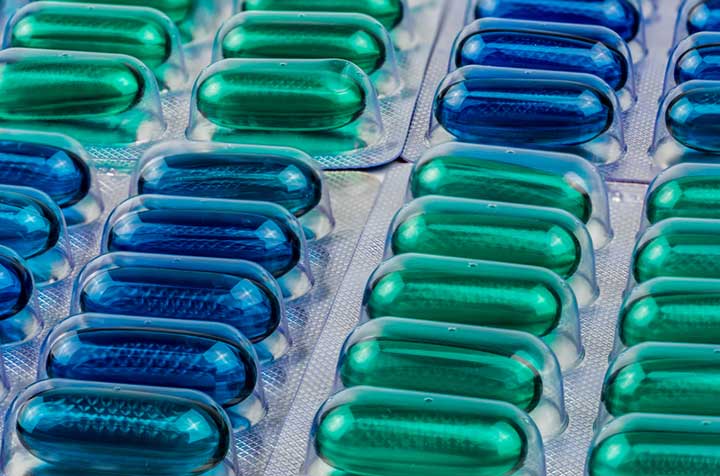 Both ibuprofen and naproxen have a lower risk of bleeding compared to other NSAIDs, but both should be taken with food or milk to reduce the risk of stomach upset.

When you have pain from such ailments as the common headache, the last thing you want to do is an in-depth study of ibuprofen vs. naproxen to decide which is best to take. Thankfully, you don’t have labor too long over the the decision, because they both relieve headaches, and they both have a lower risk of bleeding than other non-steroidal anti-inflammatory drugs, commonly known by the acronym “NSAIDs.”

Ibuprofen (Motrin, Advil) and naproxen (Aleve) are both available under generic/store-brand formulations, as well as their original brand names. Although some people do report that generics work differently for them than brand drugs, the FDA requires generic formulations to perform similarly to brands. They acknowledge a possible slight variation at times, just as between batches of the brand medicine, but the FDA monitors them closely. Any undesired effects should be reported to the FDA.

THE HISTORY OF IBRUPROFEN AND NAPROXEN

According to Wikipedia, ibuprofen was discovered in 1961 by Stewart Adams and initially marketed as Brufen. It was first sold in 1969 in the United Kingdom and in the United States in 1974. Ibuprofen is on the World Health Organization’s List of Essential Medicines, the most effective and safe medicines needed in a health system.

The company Syntex first marketed naproxen in 1976 as the prescription drug Naprosyn. They sold naproxen sodium under the brand name Anaprox in 1980. It remains a prescription-only drug in much of the world. In the United States, however, the FDA approved it as an over-the-counter (OTC) drug in 1994.

“Be careful not to take more than one product that contains an NSAID at a time,” says Karen M. Mahoney, M.D., deputy director of Food and Drug Administration (FDA) Division of Nonprescription Drug Products. Taking two NSAIDs together can increase the risk of side effects and serious adverse events. For that reason, it can be wise to only have one NSAID in your medicine chest. It would avoid you reaching for the wrong bottle when you need a second dose.

Always discuss the use of OTC pain relievers with your physician, so you know what you can and cannot use with other medications.

Ibuprofen can interfere with the antiplatelet effect of aspirin, which is a serious warning for those on low-dose aspirin program. Timing is key. If you took the ibuprofen first, wait at least 30 minutes after taking aspirin to take the ibuprofen. If you took the aspirin first, you need to wait 8 hours, according to the FDA. (Timing may vary if you’re using enteric-coated aspirin.)

Another ibuprofen interaction involves the use of alcohol. That combination can increase the risk of gastrointestinal bleeding.

Naproxen comes with a list of drugs it can interact with, which means if you choose naproxen as your go-to pain reliever, you must discuss its use with any physician prescribing you drugs.

It may interfere with:

Risks of Ibuprofen vs. Naproxen

Both ibuprofen and naproxen have a lower risk of bleeding compared to other NSAIDs, but both should be taken with food or milk to reduce the risk of stomach upset. Risks are similar, and neither should be taken during pregnancy. People who have cardiovascular disease, particularly those who recently had a heart attack or cardiac bypass surgery, are at the greatest risk for cardiovascular adverse events associated with NSAIDs, warns the FDA. Physicians frequently recommend acetaminophen as an OTC pain reliever for patients with cardiovascular issues.

How Do NSAIDs Work?

Choosing ibuprofen vs. naproxen has nothing to do with the way they work in the body because they both work by inhibiting the COX enzymes:

A 1984 study by The Manchester General Practitioner Group looked at 226 patients with osteoarthritis. The participants were randomly assigned to take either naproxen or ibuprofen. Both drugs reduced stiffness, pain, and overall disease severity. However, naproxen was found to be superior to ibuprofen in relieving resting pain, movement pain, night pain, and interference with daily activities. The study found 45 patients had side-effects (mainly mild gastrointestinal problems) from naproxen and 30 with ibuprofen (11 were patients who had side effects on both drugs). One patient had a gastrointestinal bleed while taking naproxen. Overall treatment preference significantly favored naproxen, concluded the researchers.