Home » Daily » Nutrition » Is Canola Oil Bad for You? Be Skeptical About Extremist Claims 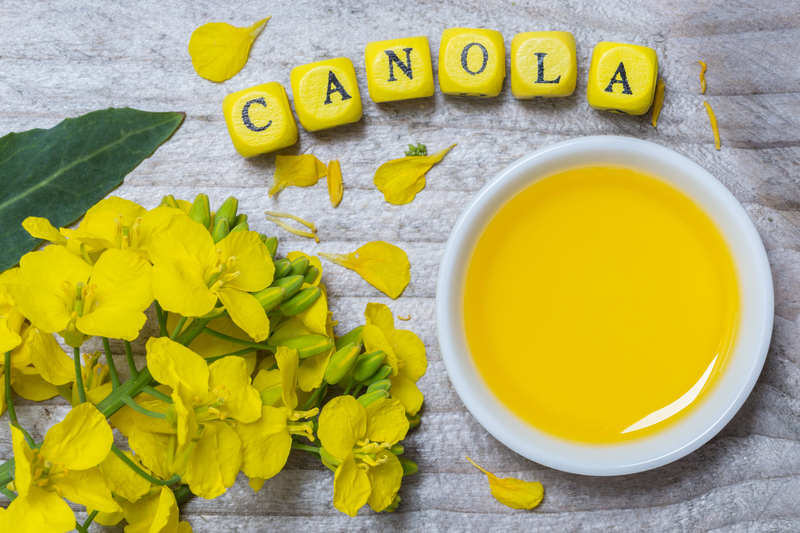 Is canola oil bad for you? Not so fast—there are plenty of reasons to recommend it.

Before answering the question “Is canola oil bad for you?” (and addressing the controversy surrounding it), let’s look at the history of this widely consumed product.

First, you can thank Canada for canola oil. By the 1970s, scientists in that country figured out a way to use a plant called rapeseed to produce a vegetable oil notable for being low in saturated fats and high in healthy unsaturated fats. Thus was born the now-ubiquitous canola, a trademark combining “Canadian” and “ola” (for oil).

But the temperature of comments about canola sometimes far exceeds the smoke point of this mainstay frying and baking oil. Browse the Internet and you’ll see words like “toxic” and “rancid” used to describe canola oil—along with untold numbers of disturbing claims about it.

Why? What’s all the fuss about canola oil? And how does it stack up in nutritional value compared to other liquid vegetable oils?

Is Canola Oil Bad for You? The Case for Canola

Rapeseed is the third-largest source of vegetable oil in the world. Until the 1970s, it wasn’t used as a food. But Canadian plant breeders created a variety of rapeseed that produced seeds that could be tapped for food-grade vegetable oil.

Canola has been marketed as a healthy oil for a few reasons. One is its fatty acid profile:

Liquid vegetable oils are a pillar of a healthy eating pattern, according to the science-based 2015–2020 Dietary Guidelines for Americans. Overall, there is good evidence that replacing some of the saturated fat in your diet with unsaturated fats is a healthy move.

Shifting the balance from saturated to unsaturated also may lower your risk of heart disease by reducing total cholesterol and “bad” LDL cholesterol. According to the 2017 report from a presidential advisory panel of the American Heart Association, polyunsaturated fats appear to reduce heart risk somewhat more than monounsaturated fats.

A few aspects of canola oil have drawn the ire of detractors—particularly an alleged toxic contaminant and the impact on nutrition of the industrial processing required to make canola. Let’s look at them one by one.

Erucic acid: Canola oil contains a trace amount of erucic acid. It’s one of several types of monounsaturated fatty acids in canola oil. (For organic chemistry fans, erucic acid in an omega-9 fatty acid). At sufficiently high levels, erucic acid can cause damage to the heart and other organs.

Erucic acid is present in the oil-rich seeds of the Brassicaceae family of plants, such as rapeseed and mustard. The oil of wild rapeseeds is up to 40 percent erucic acid, which initially nixed rapeseed oil as an edible oil.

Industrial processing: Another canola oil trait that bugs people is the high heat and chemical solvents required to manufacture it. The details of the process remind you of why people are advised not to go inside sausage factories if they want to keep enjoying that food.

After canola seeds are washed, crushed, and pressed to extract most of the oil, the leftovers are churned in a bath of industrial solvent to remove the remainder. Typically, the solvent used is hexane, which comes from petroleum.

After processing, the solvent is removed from the oil. A tiny amount can remain, however. It’s less than a part per million (ppm), according to Health Canada.

Trans-fats. Canola critics also point to the trans fats in canola oil. Trans fats are indeed unhealthy and have been banned from the U.S. food supply.

Processed vegetable oils (not just canola) go through a high heating step called “deoderization.” The process drives off unappealing tastes and odors to essentially make the oil taste neutral, which is what most consumers prefer.

In heating, a small amount of the healthy unsaturated fats in canola are converted into trans fats. Other vegetable oils contain trans fats at levels from 2 to 4 percent of their total fats. These include soybean, walnut, sunflower, and olive oil, not to mention cow’s milk. Olive oil’s trans fat content is comparatively low: about 0.5 percent.

You won’t see these trans fats noted on the ingredients label, though. A serving of oil (a tablespoon) contains less than 0.5 grams of trans fat, so it’s not required to be on the label. (This also applies to more well-known sources of trans fat—like crackers, baked goods, and breakfast sandwiches.)

Omega-3s. Heating also substantially reduces the omega-3s (alpha linoleic acid) in rapeseed oil, although a fair amount is left—11 percent of the total. Eat fish regularly, especially fatty fish, to obtain more omega-3s. Still a matter of debate: whether plant-derived omega-3 fatty acids from sources like vegetable oil and nuts are as healthy as omega-3s from seafood.

Genetically modified. After Canadian plant breeders first transformed rapeseed into a commercial crop, agribusiness genetically engineered rapeseed to resist the effects of herbicides so the plant could be produced with less loss to weeds. Most of the canola oil in North America is made from GMO (genetically modified organism) rapeseed. Some consumers and scientists are opposed to GMO-based crops for a variety of reasons.

Should You Use Canola Oil?

Canola is rich in unsaturated fatty acids and relatively low in saturated fatty acids. There’s good evidence that shifting the fats in your diet from saturated to unsaturated improves diet quality and heart health, though research continues. And you have plenty of other options to get choices in healthy vegetable oils: avocado, corn, flax, olive, peanut, safflower, soybean, and sunflowers.

However, to people seeking “clean” foods with no additives, contaminants, or GMOs, canola and other highly processed vegetable oils may seem a little unappealing. It’s a legitimate personal choice, though not based on science.

Assuming you’re willing to pay more, you can buy cold- or expeller-pressed and certified organic vegetable oils. They are not processed with high heat and chemical solvents.

Virgin or extra-virgin olive oil is a popular choice because the oil is extracted mechanically, without solvents, and it is not subjected to high heat (although some people don’t like its “strong” flavor). But don’t forget that generic olive oil (not labeled extra-virgin) may also be heavily processed.