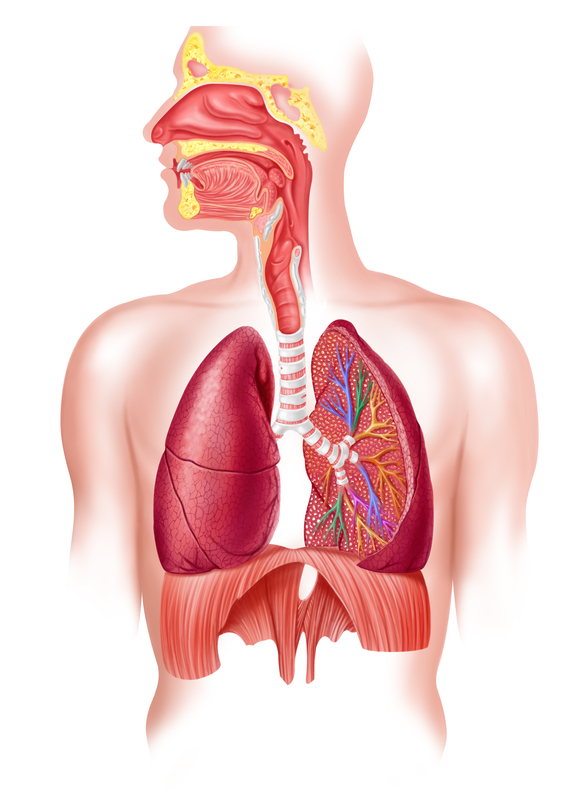 This diagram shows the human respiratory system along with nasal and mouth.

Chronic obstructive pulmonary disease (COPD) isn’t simply one disease, but a term used to describe serious lung problems such as emphysema and chronic bronchitis. Severe, non-reversible asthma can sometimes be considered a form of COPD. Guidelines for treatment of these serious respiratory conditions call for a mix of medications, oxygen therapy, and other interventions. If you have bronchitis, asthma, or emphysema, treatment is usually focused on relieving symptoms and slowing the progression of the conditions, since COPD has no cure.

Several medical organizations, including the American Thoracic Society and the American College of Physicians, have guidelines and standards for the diagnosis and treatment of patients with COPD. They differ in some areas and get updated periodically based on new research on medications and other treatments. In general, though, COPD guidelines include some basic approaches.

When it comes to diagnosing COPD, guidelines typically focus on spirometry, a test involving a device that measures how much air you inhale and exhale, and how quickly you exhale.

A spirometry test is performed in a doctor’s office. The patient blows into a device that’s hooked up to a monitor that measures, among other things, how much air you can breathe out in 1 second. If your lungs are healthy and your airways clear, you can exhale almost all of the air in your lungs in that 1 second. If you have COPD, you’ll be able to inhale and exhale a much smaller percentage of air.

A physical exam, of course, is also a standard part of COPD diagnosis. If you’re coughing consistently and producing mucus with your coughs, your physician will likely call for the sputum (a mix of saliva and mucus produced by coughing) to be analyzed in a lab. The results can help your doctor make a more complete diagnosis by discovering or ruling out the presence of an infection or allergies.

Though ruling out other diseases isn’t officially part of most COPD guidelines, it is an important part of the diagnostic process. A person could have COPD and other health issues, which make the COPD symptoms worse. By treating your other health problems, your doctor may be able to ease the challenges of COPD.

Bronchitis and emphysema treatment often include the same recommended medications. The main drugs recommended in most COPD guidelines are called bronchodilators. There are different types of bronchodilators, but their primary aim is to increase airflow to the lungs by decreasing resistance to healthy inhalation and exhalation. COPD medications can be taken orally or intravenously, but usually they are breathed in with the help of hand-held inhalers.

The two main types of bronchodilators are beta-agonists and anticholinergics. These drugs come in long-acting and short-acting versions. The long-acting bronchodilators can last up to 12 hours. Short-acting medications are helpful in treating flare-ups or before physical activity, when the lungs will be stressed. The American College of Physicians recommends that COPD be treated with “inhaled monotherapy” (taking one drug instead of a combination of several medications) of either beta-agonists or anticholinergics.

Beta-agonists are medications that help the muscles around the airways relax to allow better airflow. Anticholinergics relax the lung’s airways themselves, and keep the airways from having spasms that cause the airways to suddenly grow narrower.

COPD guidelines also say that inhaled corticosteroids may also be appropriate, but all the organizations stress that these powerful medications be used only for severe cases of chronic bronchitis and emphysema and only on a short-term basis. Emphysema treatment may also include antibiotics if a bacterial infection, such as acute bronchitis or pneumonia, has developed.

Pulmonary rehabilitation is also a standard feature of most COPD guidelines. This type of rehab emphasizes exercise, education, and breathing training. While exercise is one of the biggest challenges for people with compromised lung function, it may be one of the most helpful types of therapy, according to Marilyn Moy, MD, assistant professor of medicine at Harvard Medical School. Her research found that COPD patients who exercise regularly live longer than those who don’t.

“We know that physical activity can have a positive benefit for people with COPD and these findings confirm that it may reduce the risk of dying following hospitalization,” Dr. Moy says.

As researchers learn more about COPD, guidelines will continue to be updated in order for physicians to have the best available guidance in diagnosing and treating patients with lung disease.

One area of research that may affect future treatment is going on at the University of Buffalo. Sanjay Sethi, MD, a professor and division chief of the pulmonary, critical care and sleep medicine at the University of Buffalo, has spent years discovering just how significantly bacterial infections can worsen COPD symptoms. He says it’s vital that physicians need to recognize and respond more aggressively to bacterial infections in these patients.

“These findings demonstrate that it’s time for a paradigm shift in how we treat patients with stable COPD,” Dr. Sethi says. “The lungs are constantly being exposed to microbes with every breath you take as well as from aspirations of small amounts of secretions from the throat, especially during sleep.

“If the persistence of these bacteria contributes to increased symptoms and inflammation in the lungs in stable COPD, we should regard this as a chronic infection, not innocuous colonization,” Dr. Sethi continues. “For that reason, more must be done to reduce chronic infections in COPD.”