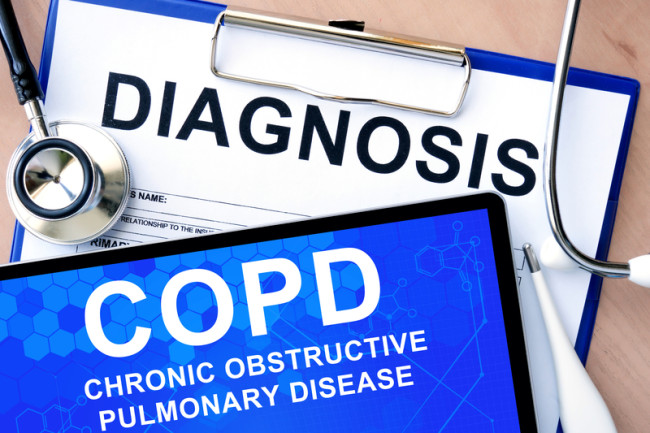 What is COPD? Most people with chronic obstructive pulmonary disease suffer from both emphysema and chronic bronchitis, conditions that can seriously affect the way your lungs work.

What is COPD? It stands for chronic obstructive pulmonary disease, and it typically describes two conditions: emphysema and chronic bronchitis. Some people suffer from just one of these conditions, but most people with COPD have both—and both can seriously affect your lungs. In fact, COPD is one of the most lethal conditions on the respiratory disorders list.

In order to know how COPD affects your lungs, it’s necessary to know some basic facts about lungs.

Inside your lungs, there’s a branching system of progressively smaller tubes (called bronchial tubes), at the end of which are air sacs (called alveoli). The alveoli have very thin walls, and are surrounded by capillaries (the smallest blood vessels). When you breathe in, oxygen and carbon dioxide travel through the bronchioles to the alveoli, and then pass through into the capillaries, where they are absorbed by red blood cells.

This “oxygenated” blood travels to the heart, and then the rest of the body. At the same time, carbon dioxide from the blood in the capillaries passes into the alveoli, to be passed out of the body when you exhale. But the conditions that underpin COPD can prevent this process from happening in the way it should.

Is COPD the same as emphysema? No—but emphysema can underpin COPD, and here’s why. The bronchioles and alveoli inside the lungs are normally very elastic, easily stretching and then returning to their original size as you breathe.

But with emphysema, the thin walls between many of the alveoli are destroyed, and they (and the bronchioles that lead to them) are no longer able to return to their original shape during exhalation. Some of the airways collapse entirely, and this means that some alveoli don’t properly deflate. When airways collapse and alveoli are destroyed, air gets trapped in the lungs. This causes parts of the lung to become enlarged.

When you ask “What is COPD?” you also need to consider chronic bronchitis, another serious condition on the lung diseases list. It’s caused by inflammation in the airways, and an increase in the production of mucus.

Inhaled tobacco smoke and other noxious particles cause lung inflammation. In the airways, the presence of harmful substances also sparks the increased production of mucus to help move the substance out of the lungs.

In addition, inhaled tobacco smoke can damage cilia: the tiny hair-like projections that normally help to sweep mucus out of the lungs, and expel toxic substances. Constant inflammation in the airways, along with an overabundance of mucus, narrows the bronchioles. This can cause difficulty breathing, and a chronic cough.

What is COPD’s typical cause? Generally, it occurs as a result of repeated exposure of the lungs and airways to irritants, most commonly smoke from cigarettes, cigars, and pipes. But other factors also may come into play, including genetics and air pollution. 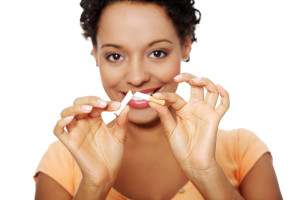 Kicking the habit of smoking can significantly reduce your chances of getting COPD and other lung disease.

Smoking: COPD most often affects people over age 40, who have smoked a pack of cigarettes a day for 10 or more years. Pipe and cigar smoking also can decrease lung function, give you lung problem symptoms, and increase the chance of COPD, even in people who have never smoked cigarettes. Recent research suggests that e-cigarettes also may be harmful to the lungs.

Smokers who have a family history of COPD are at particularly high risk, and so are people who are often exposed to secondhand smoke. People who have quit smoking are still at increased risk of eventually being diagnosed with COPD. But stopping the habit of smoking significantly reduces the chances of getting COPD, as well as other serious lung and heart diseases. You may be wondering: how long can you live with COPD? If you are, keep in mind that while COPD can’t be cured, smokers with COPD who stop smoking can slow the progression of the disease.

Genetics: Is COPD hereditary? Well, not all smokers develop COPD—therefore, experts believe that some combination of smoking and genetic factors may be at work in those who do get the disease. With the exception of the alpha-1 antitrypsin gene (see below), the specific genes that may be involved in COPD are not known. However, researchers have begun to identify possible candidates.

Occupational exposures: Long-term exposure to various kinds of chemicals, fumes, and dust can also harm the lungs and cause COPD. For example, agricultural workers may be exposed to gases and organic dusts generated by cotton, flax, hay and grains, as well as fertilizers and pesticides. Cotton textile workers may inhale cotton dust. Flourmill workers and bakers may breathe in flour and other grain particles. Exposure to coal mine dust over a full working lifetime, even at federally mandated limits, produces a cumulative exposure that appears to increase the risk for COPD. 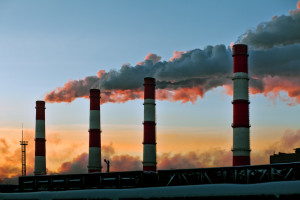 Air pollution is not our friend, contributing to pulmonary difficulties, experts believe, that can become serious. (Photo: Alexander Tolstykh | Dreamstime.com)

Air pollution: Whether outdoor air pollution from sources such as automobile, factory, and power plant emissions can cause COPD is uncertain, but there is some evidence that it damages lung function. A recent study found that people who lived near major roadways and were exposed over a long period of time to the tiny particles in automobile exhaust had an accelerated rate of decline in lung function.

In addition to fine particulate matter, another type of outdoor air pollution is ozone. In the upper atmosphere, ozone protects against harmful ultraviolet radiation. But when present at ground level, where it may form when exhaust from tailpipes, coal-fired power plants and other sources mixes with oxygen, ozone is a pollutant. One study found that increased levels of ground-level ozone correlated with an increased risk of dying from respiratory illnesses, including COPD. For people who already have COPD, exposure to high levels of outdoor air pollution can worsen their condition.

Indoor air pollution also can be a risk factor for COPD. Studies have found that exposure to wood smoke may increase COPD risk for smokers. In addition, people who already have COPD and are exposed to both types of smoke experience more frequent and severe symptoms.