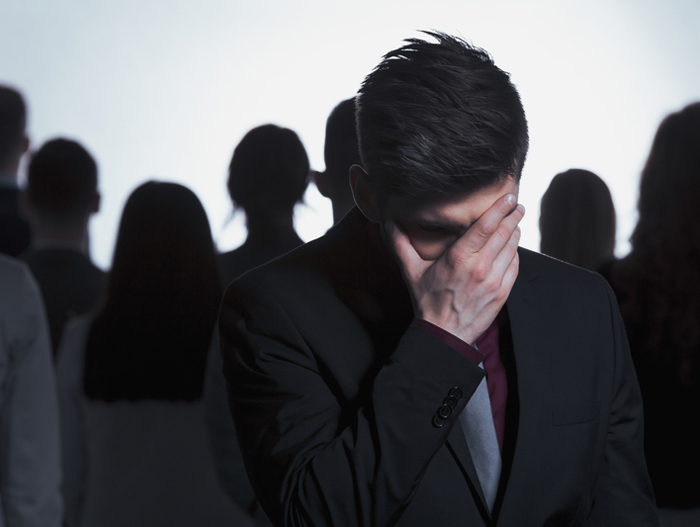 Cognitive behavioral therapy, according to research, may be the most effective way to overcome social phobia.

Some 15 million Americans have social phobia, according to the Anxiety and Depression Association of America. Also referred to as social anxiety disorder, social phobia symptoms range from just-about-manageable anxiety and stress in social situations (which means you may feel like you’re being judged by other people) to physical illness when you have to engage with others. The result of these symptoms? People with social phobia often withdraw completely and are unable to maintain studies, hold down employment, form lasting relationships, or deal with normal family conflicts, although they frequently can still maintain online contact with other people.

You may have social phobia if you:

Social phobia can be the result of an embarrassing situation in childhood—perhaps you were told off in public or maybe tripped over something, and were made a subject of ridicule. Or perhaps you were teased due to a stutter or a physical impairment.

It also is possible for social phobia to be a learned behavior—perhaps one of your parents was excessively anxious (or perhaps both were) in certain situations and you were effectively conditioned to think those behaviors were normal, and thus copied them.

Social phobia doesn’t always stem from childhood experiences, however. It can develop in adulthood (for example, you may be promoted at work and given new responsibilities that increase your stress and anxiety levels), or it may be the result of long-term illness that affects your appearance and physical function.

Some research suggests that there may be inherited genes that predispose members of the same family to social phobia. Recently, scientists have been studying a gene that encodes a brain mechanism that helps transport the “feel-good” transmitter serotonin, which is believed to suppress anxiety and depression. Early data from the study suggests that changes in DNA within the gene may be involved in the development of social phobia. This may be the reason why medications called selective serotonin reuptake inhibitors (SSRIs), which increase serotonin levels in the brain, are successful at treating anxiety disorders.

It also is possible that brain structure may underpin social phobia. Studies suggest that people who have an overactive amygdala (a region of the brain that’s involved in controlling emotions) may have a heightened response to fear.

People with social phobia are typically treated with antidepressants and anti-anxiety medications, cognitive behavioral therapy (also known as “talk therapy”), or a combination of these approaches.

There is no doubt that many people benefit from medications—however, they come with side effects, and they also don’t teach people with social phobia to self-regulate their reactions and symptoms. If people want to stop taking medications, their social phobia symptoms typically return. This means it is vitally important that people with social phobia also learn techniques that can help them handle their anxiety themselves. Recent research suggests that cognitive behavioral therapy can be particularly effective at helping them achieve this aim.

A University of Zurich study published in the August 2017 issue of the journal Molecular Psychiatry found that the brains of people who suffer from social phobia are unable to correctly regulate excessive anxiety. After 10 weeks of cognitive behavioral therapy, magnetic resonance imaging scans suggested that structural changes occurred in the participants’ brains, specifically in areas of the brain that are linked to self control and emotion regulation.

The study’s participants were randomly assigned to four groups:

The participants’ responses to their respective treatment approaches were compared throughout the study and followed up one year after the study ended.

During and immediately after the study period, groups 2 and 3 were managing equally well. But at the one-year follow-up, it became clear that the cognitive therapy group was faring the best, with 68 percent of them reporting that their social phobia had significantly improved or eased completely, compared with 40 percent in the combination group and 24 percent in the medication-only group.

Cognitive behavioral therapy essentially teaches people with social phobia to accept their fear in certain challenging situations, but then shift their attention to what they want to do or say in those situations.

Called “cognitive restructuring,” this technique helps a person with social phobia think about how they can tackle a challenge one step at a time, instead of deciding that there’s no way to manage a seemingly overwhelming and complicated problem. CBT patients also learn breathing techniques to help them relax and focus, and are often given homework between appointments and role-playing assignments during the sessions.

You can find a qualified cognitive behavioral therapist via the Academy of Cognitive Therapy (www.academyofct.org).