Home » Daily » Stress & Anxiety » What Is Anxiety? Learn About the Symptoms, Causes and Characteristics 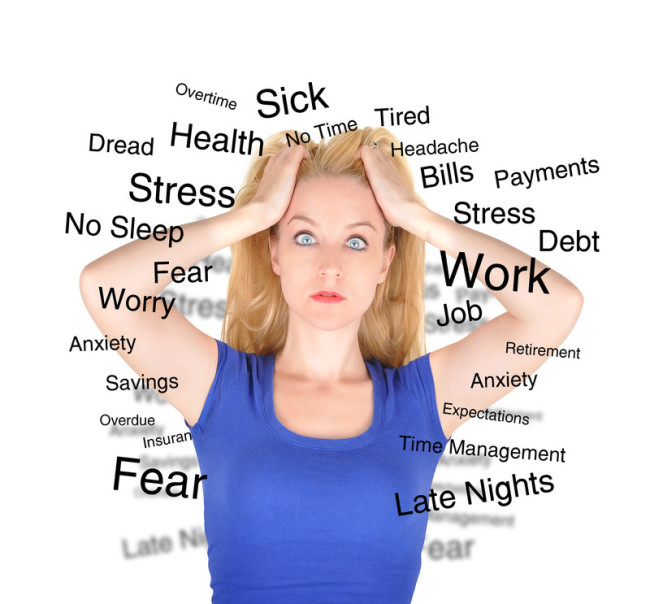 What is anxiety? Most of us have felt the causes (and effects): a seemingly endless array of "stuff" that weighs on our minds, hampering our daily responsibilities, activities, relationships, and/or sleep.

Anxiety comes in different forms and produces different reactions. So to answer the question “What is anxiety?” we’ll take a look at various anxiety definitions, discussing causes and characteristics.

Someone with generalized anxiety disorder (GAD) feels excessive anxiety or worry about a wide array of activities or events (or potential events). The level of anxiety is out of proportion with the actual risk. So, for instance, someone with GAD might be sick with worry about going canoeing for fear of drowning, even if she’s wearing a lifejacket, knows how to swim, and is accompanied by a lifeguard.

A mother, for instance, may worry so much about the risk of car accidents that she finds herself unable to pick her child up from school. Concerns that are only mild annoyances for some, such as good job performance, getting chores done, or being late for an appointment, can be overwhelming for someone with GAD.

The specific things that a person with GAD may worry about can change from time to time. What remains constant is the tendency to worry excessively. 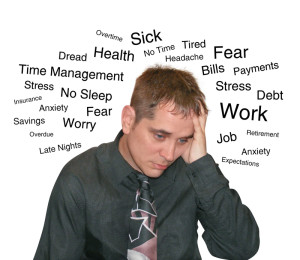 All the worries that pile up in cases of generalized anxiety disorder manifest themselves in these symptoms: restlessness or feeling “on edge”; feeling easily fatigued; having difficulty concentrating; irritability; muscle tension; and/or sleep disturbance. [Photo: © Haywiremedia | Dreamstime.com]

According to the 5th edition of the Diagnostic and Statistical Manual of Mental Disorders (DSM V), the anxiety and worry associated with generalized anxiety disorder tend to manifest as three or more of the following six symptoms, also known as panic attack symptoms.

Typically affecting children, separation anxiety occurs when one experiences excessive fear or worry upon leaving home or separating from those they are most attached to, often their mother or other parent or primary caregiver.

What is anxiety’s effect in a separation situation? Most young children show at least some hesitation or distress when separating from a parent, and it’s pretty normal for young children to cry when being dropped off at daycare or preschool. A child with separation anxiety, on the other hand, will be far more upset than other children their age when facing the same type and duration of separation.

A child with separation anxiety may cling to his mother even when she is present and refuse even to be in a different room from her or let her out of his sight. Bedtime can be a particularly difficult time; the child may refuse to sleep alone or at least fall asleep while alone. For older children, refusal to go to school or the tendency to experience significant anxiety while at school due to separation can affect academic performance.

While some children go through phases of being deeply distressed when they separate from their primary caregiver, a child with separation anxiety will express this distress consistently over weeks or months.

Other stress symptoms of separation anxiety listed in the DSM V include:

A phobia is an intense fear related to a specific situation or object. It is out of proportion with the actual risk present. Fear of spiders, known as arachnophobia, is a classic and common phobia. While most house spiders are perfectly harmless, few people would be willing to let one crawl onto their hand, and many rush out of the room in terror when they see one, even if they know for a fact it is not dangerous.

Phobias are extremely common and generally pose no significant challenges to everyday life. A fear of snakes is not generally going to keep you from doing your job, taking care of your children, or having drinks with friends. But phobias do pose a problem when they’re directed at objects or situations that are difficult or inconvenient to avoid in everyday life. Phobias of thunderstorms, heights, or elevators are some common examples.

Some people also suffer from several phobias, which together can severely limit their life. Others have severe phobias that prevent them from doing things they really need to do. For instance, fear of injections can prevent people from accepting needed medical therapy, and fear of elevators can prevent people from going places they need to go in order to do their jobs. In these cases, the fear is so overwhelming that it overshadows very real and rational concerns about not receiving needed treatment or losing one’s job.

People with phobias know their fears are irrational. Telling them that a spider is not dangerous or that it is “probably more frightened of you than you are of it” is of no help whatsoever. They may, however, associate greater risk associated with their feared object than is realistic. People who fear flying, for instance, may believe it is actually more dangerous than it really is.

Panic disorder occurs when people experience recurrent or unexpected panic attacks. The frequency and severity of such attacks varies widely, from several attacks daily to the occasional mild attack every few weeks or months. An important characteristic of the condition is that people fear having another attack and may avoid objects or situations that they think may provoke one.

There are many reasons why fear of panic attacks develops. The attacks themselves are decidedly unpleasant and often make people feel like they are dying, going crazy, or losing control. People may also fear the social embarrassment associated with panic attacks, worrying that they may do or say something seemingly “crazy” during an attack or behave inappropriately out of a need to escape a situation producing an attack (e.g., walking out in the middle of a dinner party or important meeting).

As a result, people with panic disorder may turn their lives upside down in an effort to avoid things that may trigger panic or situations they cannot easily escape from. Some may refuse to leave their homes, resulting in another anxiety disorder known as agoraphobia.