Home » Daily » Digestive Health » What Happens If You Swallow Gum? 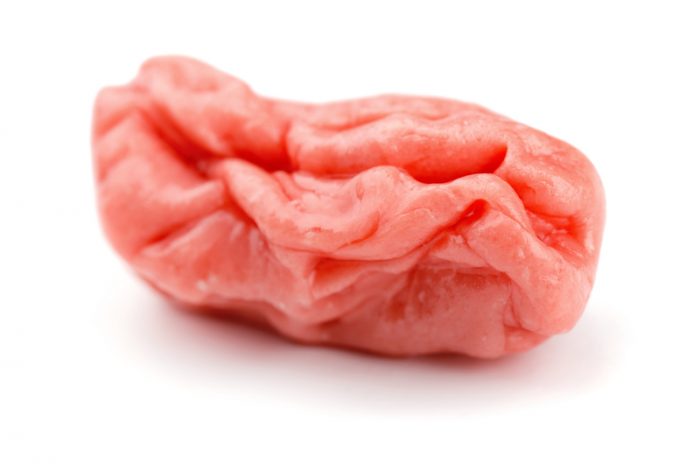 What happens if you swallow gum? If we listen to the moms of yesteryear (and maybe today!), it'll take years to pass through your digestive system.

It was a warm summer day when I first wondered, “What happens if you swallow gum?” My 6-year-old self was doing cartwheels across the back yard when the gum I was chomping on decided to launch itself down my esophagus (luckily it didn’t get stuck). We weren’t allowed to chew gum, so I’d likely nicked it from my mother’s purse. As I felt the sweet glob make its clumsy decent toward my stomach, I rushed to tell her that I was surely about to die. “Don’t worry, it will pass,” she calmly reassured me. “It just sits in your stomach for seven years first.”

A watermelon tree had supposedly been growing in that same stomach since I swallowed a few seeds the year before, so I panicked over how little room was going to be left in there for ice cream. Today, more than 30 (ahem) years later, I have yet to sprout branches. As for the gum, I’m pretty sure it’s gone the way of those quarters I downed on a dare when I was 8 years old—straight into the toilet.

People have been chewing gum (or reasonable facsimiles) since the Stone Age, but we’ve come a long way since chomping on prehistoric bark or tar. Gum now comes in multiple flavors, sizes, and chemical compositions. (Plus, we don’t have to fight off a saber-toothed tiger while chewing it.)

Sometimes, when we’re laughing at a good joke, running in the park, or just not thinking properly, we accidentally may swallow a piece of chewing gum. Is that bad? Will it impede our digestion? Will it stick to our gut for seven years? Read on to find out.

Can You Digest Gum?

The better question is, Can we digest gum? The short answer is: Kind of. Gum is made of a number of ingredients, including sweeteners (e.g., sugar or xylitol), flavorings, preservatives, and softeners (like vegetable oil or glycerin). Our digestive system can be break down, digested, and excreted ingredients. Gum’s base, however, is made from substances like butyl rubber (the same kind used to make rubber inner tubes), which can’t be digested.

“By design, gum is not easily digested,” explains Dr. Jenifer Lightdale, Division Chief of Pediatric Gastroenterology and Nutrition at UMass Memorial Children’s Medical Center. “Although it may have some sugars in it (which can be broken down by special enzymes in your small intestine), the reason gum cannot be digested is because it’s made of natural or even synthetic ingredients—including wax and resins —that your body does not digest.”

Ever notice how corn kernels come out the other end looking the same as they did going in? It’s a similar concept with the butyl (or other base) used in gum. Since it can’t be digested, your digestive system moves it along slowly and eventually (in a day or two—not seven years) it passes in your poop. (How could I not use that word in an article about what happens if you swallow gum?)

What Happens if You Swallow Gum?

First, you’ll likely experience momentary panic as Mom’s warning (“It stays in your gut for seven years”) replays itself in the part of your brain that stores childhood memories and B-list movie quotes. Once you realize it’s a myth, you’ll breathe a sigh of relief while your digestive system does its job.

As with other foods, your body will break down the parts of the gum it can use and, mentioned above, fluid will help carry the rest through your intestinal tract and out of your body.

Can Swallowing Gum Hurt You?

CHEWING GUM CAN BE GOOD FOR OUR HEALTH

A study in the journal Neurology found that chewing gum can increase the flow of saliva and the frequency of swallow in patients with Parkinson’s disease. Other research shows that chomping on a stick of gum can help reduce stress.

Swallowing gum will have no ill effects on your health—unless you’re frequently gulping multiple wads or suffer from a digestive disorder. A 1998 study published in the journal Pediatrics outlined three cases in which children developed severe obstructions in the intestinal tract and esophagus. In all three instances, the children had swallowed multiple pieces of gum (e.g., three or more daily), which resulted in a bezoar—a mass trapped in the gastrointestinal system.

According to the American Academy of Pediatrics, other minor side-effects include abdominal pain, gas, mouth ulcers, dental and jaw problems, and diarrhea.

The reason it doesn’t stick around? Your intestines move often, helping the gum to pass through without getting caught up, she says. This process is called peristalsis, and it involves muscles within the intestines that push pieces of food, digestive juices, and waste along until they can be pushed out completely.

How Much Gum Is Too Much to Swallow?

“The right amount of gum to swallow is no gum,” says Dr. Jonathan Sollinger, a pediatrician in Westport, Conn. That said, he adds, “you would need to swallow Olympic levels of gum to cause a problem.”

What Are the Downsides to Chewing Gum?

In addition to posing a choking hazard, gum can also cause cavities, especially if you’re chewing a brand laden with sugar.

Gum is also filled with chemicals—from butyl to sweeteners like xylitol —the long-term effects of which aren’t fully known. Another downside: sorbitol (a common sweetener) can cause diarrhea. As with anything, having too much can cause problems, so stick with a piece or two of sugar-free gum a day tops. Also, don’t give gum to kids under 5. They’re too young to understand not to swallow it.

Another Reason Not to Swallow Gum

“Swallowing gum is…kind of gross,” says Dr. Lightdale. “I have actually seen gum on occasion when performing a special procedure in children – called colonoscopy – where I use a camera to look inside their large intestines. Trust me!  Once you have seen a piece of gum inside someone’s intestine, you are never tempted to swallow a piece ever again.”