Home » Daily » Prostate » What Is Hypertrophy? A Closer Look at BPH 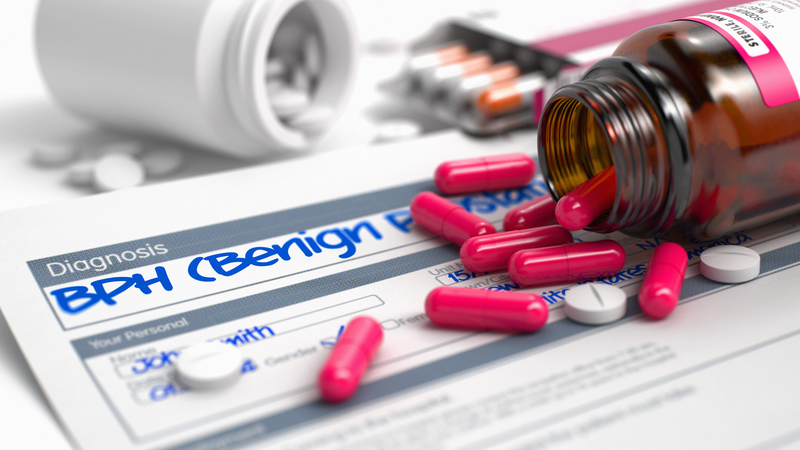 Hypertrophy is the process by which a cell grows beyond its normal size and causes tissue growth. Some forms of hypertrophy are positive–as when your muscles grow in response to strength training and other physical activity. Others, however, are problematical.

For example, cell growth in the heart muscle—hypertrophic cardiomyopathy—can cause mitral valve problems, irregular heart rhythms, and, ultimately, heart failure, among other complications.

If you’ve ever wondered “What is hypertrophy of the prostate?” you need only experience the urinary symptoms—among them the multiple treks to and from the bathroom during the night—to understand. The good news? Treatments can relieve symptoms and restore your quality of life.

What Is Hypertrophy of the Prostate?

The prostate lies just below the bladder, wrapped around a thin tube called the urethra, which delivers urine from the bladder out through the penis. By the time a man reaches age 20, his prostate reaches its normal adult size; the typical comparison: a walnut. Later in life, the gland can swell to as large as a baseball. Why? The reasons aren’t 100 percent understood.

For years, BPH stood for benign prostatic hypertrophy because of the abnormal cell growth that occurs in the prostate. More recently, experts have referred to the condition as benign prostatic hyperplasia because not only do the cells grow, but they also proliferate rapidly to cause prostatic enlargement. (“Hyperplasia” means an increase in cell numbers.)

By any name, BPH is burdensome. When enlarged, the prostate squeezes the urethra like a kink in a garden hose, blocking urine flow. This blockage begins to damage and irritate the bladder, which may begin to contract even when only a little urine is present. As a result, older men feel the need to urinate more often. Eventually, the bladder may weaken and no longer be able to empty completely.

In addition to increasing urinary frequency, BPH may cause the following symptoms:

Many men experience just a few of these symptoms, or their symptoms may be mild enough that they’re not bothersome. Up to half of men with mild symptoms experience no worsening of their condition and require no treatment. In fact, some studies have shown that symptoms will clear up on their own in about one-third of mild cases.

It’s a good idea, however, to undergo a medical evaluation if you experience lower urinary tract symptoms—just to make sure they’re not signs of prostate cancer. It’s also a good idea to get checked out because chronic urinary retention due to an enlarged prostate can cause permanent bladder and kidney damage, bladder stones, and recurrent urinary tract infections.

To help reduce BPH symptoms or prevent them from worsening, try adopting these lifestyle measures:

By itself, the word “hypertrophy,” according to Merriam-Webster, means: “Excessive development of an organ or part,” or “Exaggerated growth or complexity.” When combined with “benign prostatic” (as in, benign prostatic hypertrophy), it gets this definition: “Enlargement of the prostate gland caused by a benign overgrowth of chiefly glandular tissue that occurs especially in some men over 50 years old and that tends to obstruct urination by constricting the urethra.”

If your symptoms worsen to the point where they erode your quality of life, treatment with oral medications can help. Drugs known as 5-alpha reductase inhibitors (5-ARIs), such as dutasteride (Avodart) and finasteride (Proscar), can shrink the prostate, reduce symptoms, and prevent BPH progression. They usually take three to six months to work.

In the meantime, your doctor may combine the 5-ARIs with a class of medications known as alpha-blockers—alfuzosin (Uroxatral), silodosin (Rapaflo), and tamsulosin (Flomax). These drugs take effect within a few days and ease symptoms by relaxing the smooth muscle around the bladder opening to the urethra, but they don’t shrink the prostate.

Is ED Also a Symptom?

If you have BPH and erectile dysfunction, your physician may prescribe tadalafil (Cialis), which has been approved to treat both conditions. In addition, other medications used to treat overactive bladder may be prescribed to relax the bladder and improve BPH-related urinary frequency or urgency.

If the medications aren’t effective, several minimally invasive procedures employing a variety of energy sources can destroy excess prostate tissue and relieve symptoms. In another interventional treatment known as the prostatic urethral lift (Urolift), small implants placed in the lateral lobes of the prostate pull back and hold the excess tissue out of the way so that it no longer blocks the urethra.

Finally, surgery may be necessary for some men with very large prostates or severe symptoms or those who have complicating factors such as frequent urinary tract infections, kidney problems, or bladder problems.