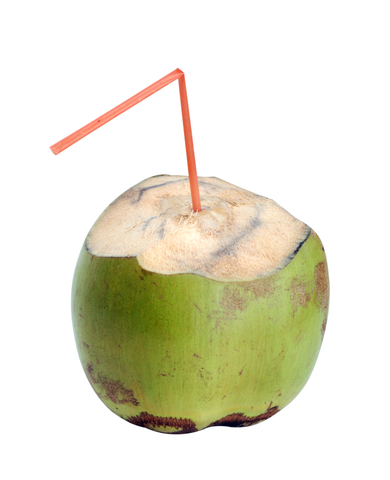 How much coconut water should I drink per day? Limit your intake to a few servings a day to avoid coconut water disadvantages such as high levels of potassium.

In a case study titled “Death by Coconut,” published in Circulation, Justin Hakimian, MD, and his colleagues at the Department of Cardiology, New York Hospital Queens, describe the case of a 42-year-old previously healthy man who developed dangerously high potassium levels that led to fainting and abnormal heart rhythms after drinking a large amount of coconut water.[1]. The man had been playing tennis outdoors all day in temperatures in excess of 90° F. He reported drinking a total of eight 11-ounce bottles of coconut water throughout the day. He experienced a sudden onset of lightheadedness and briefly lost consciousness. Afterward, he complained of weakness and lightheadedness and was brought to the emergency department by ambulance. He was disoriented and warm and, most importantly, had a very low blood pressure and heart rate.

This unfortunate man was experiencing the classic signs of too much potassium in the blood. The body needs a delicate balance of potassium to help the heart and other muscles work properly. Most Americans consume too little potassium, which is mostly found in fruits and vegetables. Nevertheless, consuming a large amount of coconut water potassium in a relatively short period of time can lead to dangerous, and possibly deadly, changes in heart rhythm.

In fact, high potassium (hyperkalemia) is a common cause of life-threatening heart rhythm changes, including ventricular fibrillation, an emergency condition in which the lower parts of the heart flutter rapidly instead of pumping blood. If extremely high potassium levels in the blood remain untreated, the heart may stop beating, causing death.

The Institute of Medicine has set an adequate intake for potassium at 4,700 mg/day for adults, but they have not set an upper limit. Therefore, it is not clear exactly how much potassium can be taken safely. However, as you just learned, very high doses of potassium can be deadly.

In the case above, the man was also found to have muscle tissue breakdown (rhabdomyolysis). This can occur from muscle exertion, including from strenuous exercise, endurance exercise, and exercise in hot and humid conditions. Rhabdomyolysis commonly causes kidney damage. His doctors estimated that he ingested about 5,500 mg of potassium from his eight servings of coconut water. This amount of potassium, combined with the potassium that was likely released from his muscle fibers after prolonged exercise, was enough to hospitalize him.

Fortunately, after a three-day hospital stay and a temporary pacemaker, the man recovered. His potassium levels returned to normal and his heart began working properly again, as did his muscles and kidneys, which had gone into acute failure.

People can suffer from too little potassium as well. Learn more in 3 Serious Potassium Deficiency Symptoms to Watch Out For.

The High Potassium Content of Coconut Water: Benefits and Risks

And, as you can read here, reversing severe dehydration and replenishing electrolytes with coconut water for diarrhea relief or help with prolonged strenuous exercise in the heat, is not recommended. Coconut water’s electrolytes and concentration just are not balanced enough to make it a great rehydration solution in extreme cases.

Most people have no reason to fear drinking coconut water. Benefits of drinking coconut water, an all-natural, uncommonly nutritious beverage, are great: Coconut water is an excellent way to quench your thirst, boost hydration, and increase your intake of important vitamins, minerals, and phytonutrients. It even helps treat high blood pressure, if needed. Just limit your intake to a few servings a day. Use good judgment and remember that for non-athletes, plain water is the beverage of choice during and after a daily workout. Coconut oil, another product, also offers a variety of health benefits. Begin exploring them in Coconut Oil for Memory Loss. In addition, coconut milk can serve as an lower-fat substitute for whole milk. Find out more about its health benefits in Is Coconut Milk Healthy?

This post was originally published in 2014. It is regularly updated.