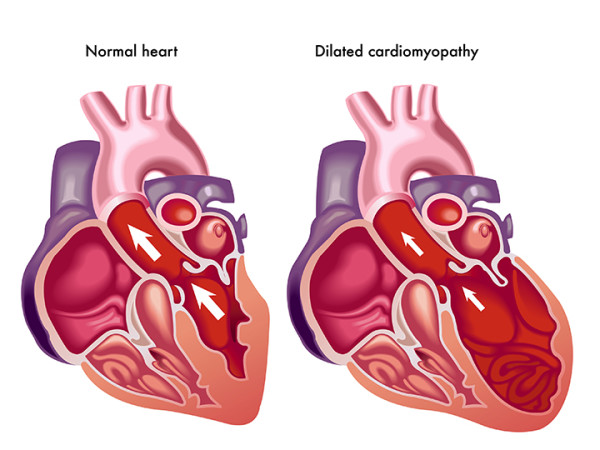 The difference between a normal heart and a heart affected by dilated cardiomyopathy.

Cardiomyopathy is sometimes referred to as an “enlarged heart,” because the main sign is a heart muscle that has become thicker and more rigid. Bigger muscles might be what athletes want in their arms and legs. But a bigger heart isn’t a good thing, as it actually becomes weaker rather than stronger.

There are actually several different types of cardiomyopathy. They include the following:

There are other types of cardiomyopathy, usually categorized under “unclassified cardiomyopathy.” Some people with mild cardiomyopathy may never experience any enlarged heart symptoms, while others develop very serious complications. Typically, the cause of your cardiomyopathy determines the severity of symptoms and the type of treatment that you’ll need.

There are two basic enlarged heart causes. It can either be inherited or acquired. Inherited, as you might surmise, means the condition is part of the genes passed on to you from your parents. Hypertrophic cardiomyopathy is often inherited, though it can develop in older adults.

Dilated cardiomyopathy is sometimes inherited, but is usually the result of coronary artery disease, high blood pressure, a heart attack, or other heart condition. A viral infection that causes inflammation of the heart can also lead to dilated cardiomyopathy. The condition in women is also sometimes related to complications during the last months of pregnancy.

Causes of an Enlarged Heart

Arrhythmogenic right ventricular dysplasia is thought to be an inherited enlarged heart cause.

In the early stages of cardiomyopathy, you may not notice any enlarged heart symptoms. But as the condition develops, you may experience heart failure-like symptoms, such as shortness of breath, fatigue, and swelling in the legs and feet (and possibly in the neck and abdomen). Dizziness or lightheadedness may also occur, and arrhythmias may also develop over time.