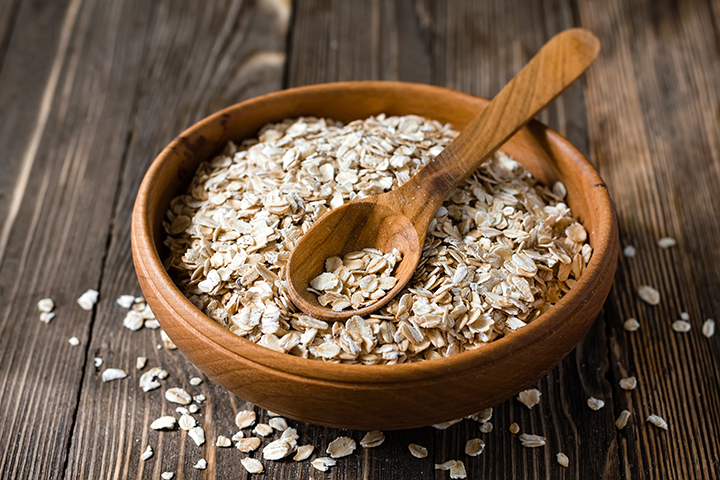 Busy mornings? Instead of cooking your oatmeal, soak old-fashioned oats in milk or water the night before and then top with fruit or peanut butter the next morning. "Overnight oats" can be eaten hot or cold.

If your doctor recently informed you that you’re intolerant of gluten, you might be wondering which of your favorite foods are now off limits—and how your diet will have to change in the long term. And if you’re a fan of hot cereal for breakfast, which is often made with wheat, barley, and other grains containing gluten, you naturally might be asking, “Is oatmeal gluten-free?”

The answer is slightly more complicated than a simple “yes” or “no.”

Oatmeal is one of the most versatile grains in the American diet. In addition to its popularity as a hot cereal for breakfast, it’s used to make cookies, granola, mueseli, and stuffing, and also works as a binder for meatloaf and other savory dishes. Oatmeal is highly regarded for its high protein and fiber content. In fact, whole grain oats are the most effective choice for lowering cholesterol, according to the American Journal of Clinical Nutrition.

A Grain of Salt

So, is oatmeal gluten-free? While the answer is “yes,” those living with gluten intolerance or celiac disease should be careful because most oatmeal products sold on the market today are handled by farmers and factories that also process products containing wheat, barely, and/or rye. Therefore, cross-contamination is a concern. Fortunately, a number of companies sell oatmeal certified as “gluten free,” which makes it safe for the majority of people with gluten intolerance and celiac disease.

For a list of oatmeal products that are certified gluten free, contact the Gluten-Free Certification Organization, Celiac Support Association, and/or the Gluten-Free Certification Program. In order for oats to be labeled “gluten free” by the U.S. Food & Drug Administration (FDA), no more than 20 parts per million (ppm) of gluten can be present within one serving. A serving of oats not labeled “gluten free” can contain up to 100 ppm of gluten. Some companies, however, have stricter guidelines than even the FDA and, thus, reduce the gluten levels to as low as 3 ppm or less in a serving.

Here’s where the question “Is oatmeal gluten-free?” can get a little more complicated. If you’ve been diagnosed with gluten intolerance or celiac disease, there’s a small chance that you might also have an oat sensitivity that causes similar symptoms. Although oats do not contain gluten, they do contain avenin, a protein similar to gluten. It is estimated that 10 to 15 percent of people living with celiac disease also have a sensitivity to avenin.

It’s also important to remember that not all varieties of oats will result in the same reaction. For example, steel cut oats are considered to be safer because they’re processed through a burr grinder, which is easier to clean and thus less likely to become cross-contaminated, according to the CSO. (See also this article published by Gluten Free & More magazine: “Feel Your Oats! How Safe Are They? The Scoop on Gluten-Free Oats.”)

Is Oatmeal Gluten-Free? A Trial-and-Error Approach May Be Necessary

Essentially, whether you decide to include gluten-free oats in your diet or not is up to you, with your healthcare provider’s input as needed, says Mary Schluckebier, vice-president of education and outreach at the Celiac Support Association.

“At this time, the only way to know if oats are right for you is to experiment and try them,” Schluckebier explains. “For those wanting to consider oats in their food plan, we encourage people to build and stabilize their health for at least one year after going on the gluten-free diet. Once health is stable, uncontaminated oats can be introduced a little bit at a time so an individual can personally determine whether they are an oat responder or not.”

If you’re oat-sensitive or don’t want to take any chances, you might want to try buckwheat, quinoa, or amaranth, which are 100 percent free of gluten and make great hot cereal alternatives. There are plenty of brands from which to choose, but you can also make your own cereal at home. Here’s a recipe that combines quinoa, flax seeds, and fruit to make a delicious breakfast:

Directions
In a small saucepan, bring milk to a boil. Add quinoa and return to a boil. Reduce heat to low and cover. Cook 10 to 12 minutes or until most of the milk has been absorbed.
Add brown sugar, cinnamon, flax seeds and strawberry jam. Cover and cook for another 5 to 6 minutes or until milk has been absorbed.
Remove from heat. Add in grapes, mixing well to combine.
Transfer cereal to bowls. Serve warm with additional milk, strawberry jam and a sprinkling of cinnamon.