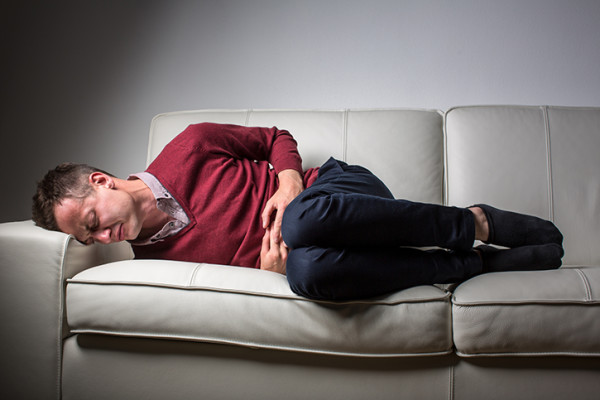 Pain and cramping is a constant visitor for people who suffer from irritable bowel syndrome.

According to the Irritable Bowel Syndrome Association, roughly 10 to 15 percent of Americans suffer from IBS (irritable bowel syndrome) symptoms. Characterized by such symptoms as cramp-like abdominal pain, bloating, diarrhea, and constipation, IBS can be uncomfortable and distressing. However, it does not cause permanent harm to the intestines, or lead to intestinal bleeding or serious disease such as cancer.

The colon of an IBS patient is more sensitive and reactive. It can react to stimuli by moving contents too quickly through the colon, causing watery diarrhea. The colon can also react by slowing down the movement of contents, causing constipation.

The cause of IBS is not known. IBS is called a functional disorder rather than a disease. Women are more susceptible to IBS than men, and it usually begins around age 20. Emotional stress is often blamed for causing IBS, since no physical damage to the colon is detected. However, while stress may worsen symptoms of IBS, other factors are also at play.

The following have been reported to worsen symptoms of IBS:

Women with IBS may experience more symptoms during their menstrual periods, suggesting that reproductive hormones can exacerbate IBS.

Your doctor will need a complete medical history and a physical examination to make a diagnosis. The doctor may perform stool or blood tests, X-rays, or an endoscopy to rule out other possible causes.

IBS can’t be cured, but it can be treated with dietary changes, stress management, probiotics, and antispasmodic, anti-diarrhea, and anti-constipation drugs.

There’s evidence and data to suggest that antidepressant drugs, psychotherapy, cognitive behavioral therapy, and hypnotherapy may reduce symptoms of IBS and improve quality of life. Some IBS patients find it useful to review their diets with a registered dietitian or physician.

Research published in April 2018 is linking certain DNA variants to increased risk of irritable bowel syndrome in women. The findings help explain why IBS is a more common affliction in females than males.

Studies coordinated by Karolinska Institute in Sweden were published in the scientific journal Gastroenterology. The cause of IBS is largely unknown and hasn’t been widely researched. But the researchers, using genotype data from more than 300,000 U.K. Biobank participates in a genome-wide association study (GWAS), found DNA variants that associate with increased risk of a doctor’s diagnosis of IBS in women—but not in men. The discovery focused largely on a region from chromosome 9 previously reported to also influence puberty timing in women (age at first menstruation).

By following up on 2,045 patients from IBS centers in the United States, Italy, Sweden, Belgium, and the Netherlands, researchers also observed associates with constipation-predominant IBS as well as harder stools—again only in women.

“Although we cannot point to individual genes at this early stage, we believe these results are exciting, as they converge with existing data on female preponderance and a role of sex hormones in IBS,” according to Maura D’Amato, study author and visiting professor at Karolinska Institute’s Department of Medicine in Solna.