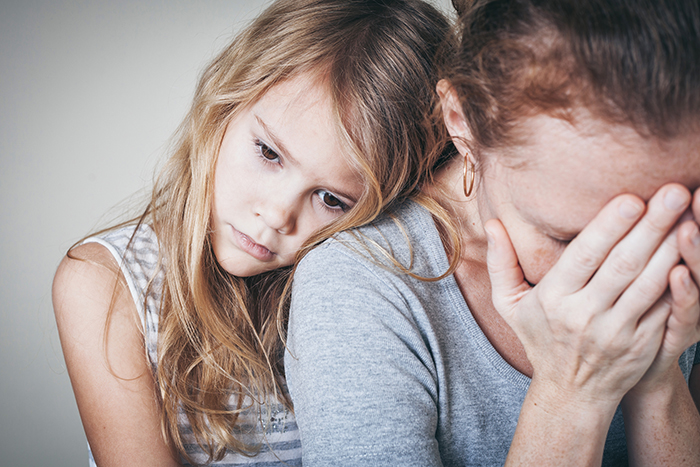 Is depression genetic? Research shows that it may be hereditary, at least to a certain extent.

For some families, a tendency to have a negative view of life is simply the norm, and children pick it up from observing their parents. Difficult life challenges, such as poverty, abuse, or poor health, can run in families and predispose members to depression. But it’s also clear—as we look for a definitive answer to the question “Is depression genetic?”—that it may be hereditary, at least to a certain extent. That is, the condition can be passed on from one generation to another through genes.

Researchers know that some people are more susceptible to depression than others. Now, thanks to genetic study, researchers are discovering why. In 2003, one group of researchers linked a variant of the serotonin transporter gene (5-HTT) with an increased risk of developing depression following stressful experiences. This gene plays a critical role in regulating available levels of serotonin in the brain.

Is Depression “Baked In?: Genetic Factors

Depression—like such other conditions as high blood pressure—is a complex disease with many causes, and it’s increasingly clear that not one gene but rather many different genes are likely to contribute to the risk of developing depression. Ongoing research continues to identify new candidate genes that are involved in depression, including genes known as SLC6A15 and RNF123.

Scientists have also pinpointed five gene variants that may increase the likelihood that someone with depression will try to commit suicide. The variants are related to the survival, growth, and connectivity of neurons. People with three of these mutations are nearly five times more likely to attempt suicide.

Only time will tell whether the discovery of these genes’ involvement in depression and suicide will lead to effective new treatments.

Genetic variants may be part of what causes depression; they’re the likely reasons why members of some families are more prone to mental illness than others, or why identical twins (who not only look the same but who have almost identical DNA) are more likely to share depression than fraternal twins or siblings (who share only half their DNA). Genes might also play a role in determining how well a person responds to antidepressant medications and what side effects they are most likely to develop.

Although genetic and other laboratory tests cannot yet determine which antidepressant medication will work best for a given person, progress is being made toward the development of this type of test, which will undoubtedly help guide treatment in the future.

Just because you carry genes associated with depression, however, it doesn’t mean you’re doomed to succumb to the disease.

Typically, your genetic makeup helps determine how likely you are to develop depression in the event that other factors related to the condition arise. For example, if you and a friend both witness a disturbing crime and you both happen to receive the same degree of support from friends and family following the event, it is possible that your underlying genetic makeup will help determine which of you might develop depression as a result.

Don’t Give Up Hope

So is depression genetic? Data tells us it can be. However, if you have several family members with depression and are worried about developing the condition yourself, don’t lose heart. It’s possible, even in the face of genetic loading, to avoid the depression pit.

Having a more positive or balanced outlook is something you can learn, possibly with the help of psychotherapy. And there is considerable evidence that having a healthy lifestyle that includes regular exercise, wholesome, nutritious food, and solid stress management tools can go a long way toward staving off and even treating depression.