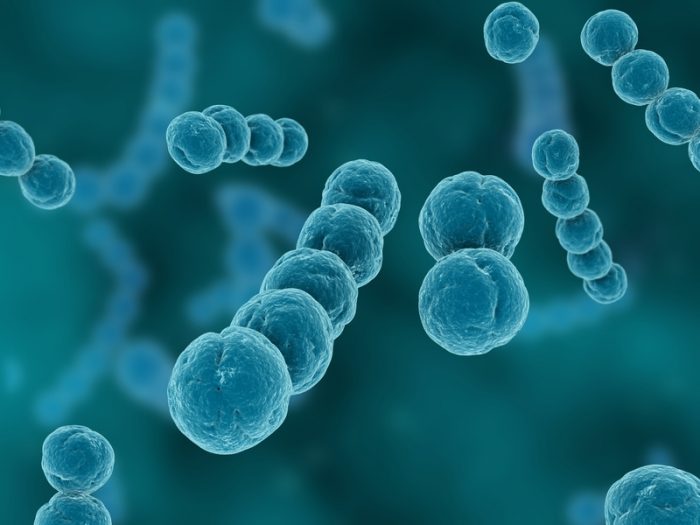 The flesh-eating bacteria is a member of group A streptococcus, the same bacteria that causes strep throat.

Flesh-eating bacteria—also known as necrotizing fasciitis—is a quick-spreading, aggressive infection that can be fatal if not treated promptly. The infection starts below the skin and spreads along the fascia (the flat layers of tissue that separate other tissues, including muscles, fat, and organs), destroying these tissues as it spreads through the body.

Flesh-eating bacteria most commonly attacks the arms, legs, and abdominal wall. According to the Centers for Disease Control and Prevention, group A streptococcus is most commonly to blame for necrotizing fasciitis, causing between 700 and 1,200 cases in the U.S. each year, although the actual number is likely higher.

Flesh-eating bacteria can be caused by multiple types of bacteria, including the following:

How Common Is Flesh-Eating Bacteria?

Not very. “Flesh-eating bacterial infections are relatively uncommon, but not so uncommon that they are rare,” says Dr. Amesh Adalja, Senior Scholar at Johns Hopkins Center for Health Security and spokesperson for the Infectious Diseases Society of America (IDSA).

“These infections can be caused by a variety of bacteria, so there is not good data on an annual number of cases,” Dr. Adalja adds. “During the 10-year period of 2003 through 2013, however, about 9,000 people died from this type of infection.”

That said, those with a strong immune system and good hygiene practices (including proper wound care) are unlikely to become infected with flesh-eating bacteria.

Those with weakened immunity (e.g., alcoholics or people with diabetes, kidney or liver disease, or cancer) are at a higher risk of infection.

How Do You Get Flesh-Eating Bacteria?

The bacteria most commonly to blame for flesh-eating bacteria is a member of group A streptococcus (GAS). Sound familiar? That’s because it’s the same bacteria known to cause strep throat.

Like any bacteria, necrotizing fasciitis can enter the body through an open wound (e.g., from an injury or surgery). It can also spread through small cuts, insect bites, and minor abrasions.

Yes, but not as easily as you may think. “When necrotizing fasciitis is caused by group A streptococcus, there is some concern for contagiousness prior to antibiotic therapy,” Dr. Adalja says, “but these infections are not contagious in the same manner as influenza.”

The most common way to spread flesh-eating bacteria is through a break in the skin—through, for example, a bug bite, surgical wound, cut, scrape, or burn.

Since symptoms of necrotizing fasciitis may start off mild—mimicking the flu, for instance, with nausea and fever—many don’t seek help right away. Sometimes, the injury through which the bacteria entered is mild, perhaps not even breaking the skin. Due to the rapid nature of this potentially fatal infection, quick diagnosis and treatment is key.

Early symptoms of necrotizing fasciitis include:

According to the CDC, you should “see a doctor right away if you have the following symptoms after an injury, even if the injury doesn’t break the skin:”

Other worrying symptoms include:

WHEN TO SEE A DOCTOR

According to Dr. Amesh Adalja of the Johns Hopkins Center for Health Security, “Symptoms that should be concerning are a skin infection that is associated with fever, rapid spread, increasing pain, and crunching sounds under the skin.”

The Centers suggests heading to a doctor if you experience fever, dizziness, or nausea shortly after an injury or surgery.

You’ll need immediate medical care if the following symptoms crop up within five days of your wound:

The most important treatment for necrotizing fasciitis is to get help quickly. According to Dr. Adalja, treatment includes both antibiotics and surgery. A doctor will determine the severity of the case and prescribe an appropriate course of action to resolve the condition.

The following are typical treatments for flesh-eating bacteria:

CAN YOU PREVENT FLESH-EATING BACTERIA?

Is there a way to prevent flesh-eating bacteria? Possibly, says Dr. Amesh Adalja of the Johns Hopkins Center for Health Security. “Good wound hygiene and prompt antibiotic therapy for skin infections can help prevent necrotizing fasciitis, but it is not ironclad,” he says. “Many cases begin with innocuous skin lesions that rapidly progress.”

Use common sense when you have an open wound, suggests the Centers for Disease Control and Prevention: