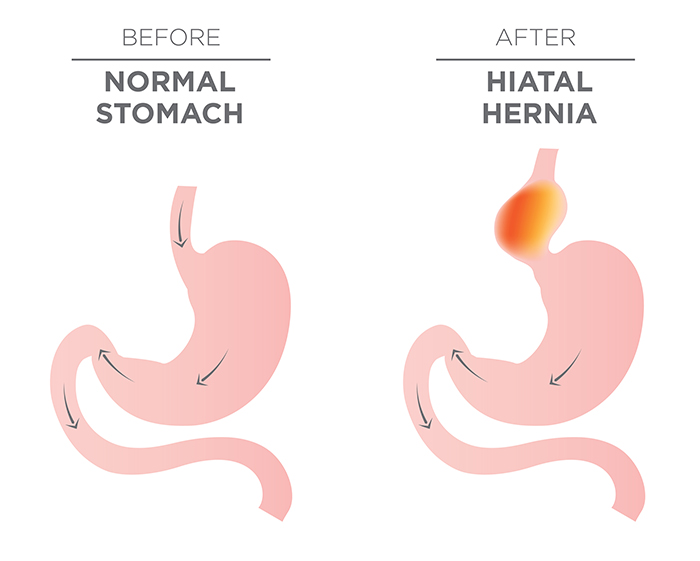 Infants diagnosed with hiatal hernia are often born with the condition, which can lead to infant GERD symptoms.

Aging puts you at risk for more health issues, particularly if you’re overweight or obese. One such issue that has become more common as the U.S. obesity rate increases is hiatal hernia pain. Estimates suggest that up to half of adults age 60 and older have this type of hernia. However, basic lifestyle changes can bring you hiatal hernia pain relief.

How a Hiatal Hernia Develops

A hernia occurs if an organ pushes through a weakened area of the body cavity that normally contains it. With a hiatal hernia, a portion of the upper stomach protrudes up through the diaphragm (the dome-shaped sheet of muscle that separates the chest cavity from the abdomen) into the chest cavity.

It isn’t clear why this weakened area of diaphragm develops, though age and weight are risk factors, as are activities that increase pressure within the abdominal cavity (for example, coughing, straining to expel a bowel movement, and lifting heavy weights). “It also is possible for the hiatus to be larger than usual,” adds Celia Divino, MD, professor of surgery at Mount Sinai.

A hiatal hernia may cause no symptoms at all—in fact, most hiatal hernias are found incidentally, during diagnostic tests for other conditions. If hiatal hernia pain occurs, they are typically mild.

The most common symptom is heartburn: a burning sensation felt in the chest area. Normally, the lower esophageal sphincter (LES)—the valve that prevents stomach acid from entering the esophagus—is level with the diaphragm, which helps to keep the LES closed when there’s no food in the esophagus.

“A hiatal hernia can push the LES above the diaphragm,” Dr. Divino says. “This impedes its function, and allows it to open at the wrong times, which results in stomach acid refluxing into the esophagus and causing heartburn. Stomach acid also may collect in the herniated part of the stomach, and this acid can then flow into the esophagus.” For these reasons, a hiatal hernia may be a cause of or contributing factor to gastroesophageal reflux disease.

Other symptoms that may accompany a hiatal hernia include difficulty swallowing, feeling excessively full after eating, and chest pain.

If your hernia is causing no problems, it may not need treatment at all. If it is symptomatic, your doctor may recommend the same medications used for GERD: over-the-counter antacids, such as Tums and Rolaids; H2 blockers, such as Pepcid; and proton pump inhibitors (PPIs), such as Prilosec. H2 blockers and PPIs reduce the production of stomach acid, and can help the esophagus to heal if stomach acid has caused inflammation.

Lifestyle measures also can help with heartburn and hiatal hernia pain relief. “If you are overweight or obese, discuss weight loss approaches with your doctor,” Dr. Divino advises. “Eat smaller, more frequent meals, avoid foods that may aggravate heartburn—such as spicy or fatty foods, chocolate, caffeine, and alcohol—and avoid lying down too soon after eating. It also can help to elevate the head of your bed several inches.”

If hiatal hernia pain is not helped by medications and lifestyle measures, surgical repair is possible. “During the surgery, the portion of the stomach that protrudes through the diaphragm is pulled back down, and the opening in the diaphragm is made smaller to prevent the hernia from recurring,” Dr. Divino explains. “It is possible for the hernia to recur, but maintaining a normal weight and avoiding lifting heavy objects can help prevent this.”