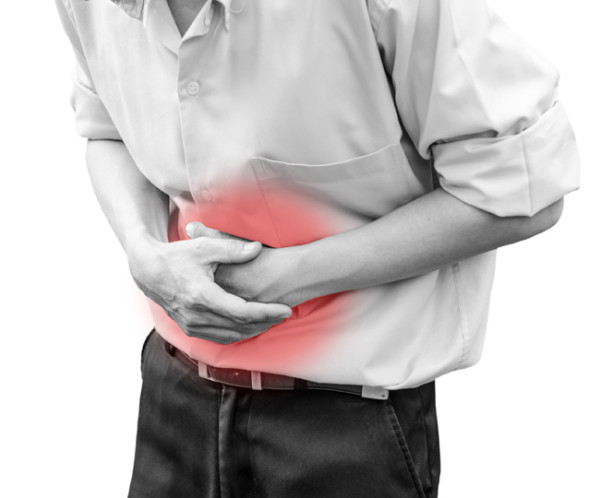 Abdominal discomfort is the first telltale sign of diverticulitis.

The risk of diverticulitis increases with age, as 70 percent of people over the age of 80 have the disease. Obesity and a lack of exercise are also factors.

Although the exact cause of diverticulosis is unknown, it’s thought that the condition results from a low-fiber diet. It is more common in industrialized countries, such as the United States, England, and Australia. Diverticulitis is uncommon in Asia and Africa, where people eat diets higher in vegetable fiber.

Fiber softens the stool so it can pass easily through the intestines. If stool is too hard, constipation will result. Straining to move a hard stool puts pressure on the colon, and which causes weak spots to bulge out, creating diverticula.

Treatment for diverticulitis can come in multiple different forms. In more serious cases, a short stay in the hospital is sometimes required. Often times, these hospital stays require intravenous (IV) antibiotics and a liquid food diet. The IV mixture will typically contain carbohydrates, proteins, fats, vitamins, and minerals. Solid foods can be gradually added back into the diet after the symptoms decrease.

Diverticular bleeding is rare, but can be severe. If you experience bleeding from your rectum, it is important to see a doctor right away. A colonoscopy may be required in order find the source of the bleeding. Doctors may also use a CT scan or an angiogram to find the bleeding. In a few cases, diverticula burst and require surgery. Surgery may also be necessary if an infection is persistent or very severe.

After seeing your doctor and being diagnosed with diverticulitis, your doctor may recommend taking a daily fiber supplement. Products such as Citrucel, Metamucil and others are often available as powders or pills and can be purchased over the counter in most pharmacies. Your doctor may also prescribe medication, such as mesalazine or rifazimin. Studies suggest that a daily dose of mesalazine may help reduce some of the symptoms associated with diverticulitis, such as bloating and abdomen pain. Probiotics may also help to treat and prevent diverticulitis. Probiotics are microorganisms that live in the gastrointestinal tract. Probiotics are typically found in foods such as yogurt, and can also be taken in supplement form in a capsule, pill, or powder form. Talk with your doctor before taking a probiotic supplement.

When suffering from diverticulitis, laxatives and enemas should not be used.

As diverticulitis symptoms can also mimic inflammatory bowel disease or infectious gastroenteritis, the doctor will likely perform a CT scan with contrast, to diagnosis the disease.

The best way to prevent diverticulitis is to eat a high-fiber diet that includes fresh fruits, vegetables, beans, nuts, corn, and whole-grain foods. Wheat bran is often recommended because it passes through your system quickly, decreasing pressure in the intestines. Those looking to increase the amount of fiber in their daily diet should do so gradually, as a sudden increase in fiber can cause severe gas and bloating.

The Dietary Guidelines for Americans recommends 25 grams of fiber per day for women and 38 grams per day for men. A high-fiber diet can also have other health benefits besides preventing diverticulitis, such as lowering blood pressure, improving blood sugar, and prevention for other digestive disorders.

In addition to getting a healthy amount of fiber every day, drinking plenty of water is another good way to prevent diverticulitis. It is recommended to drink eight 8-ounce glasses of water a day.

Research shows that certain foods may cause problems with people suffering from diverticulitis and should be avoided. These include asparagus, Brussels sprouts, cola beverages, pears, and any product that includes added sugar.