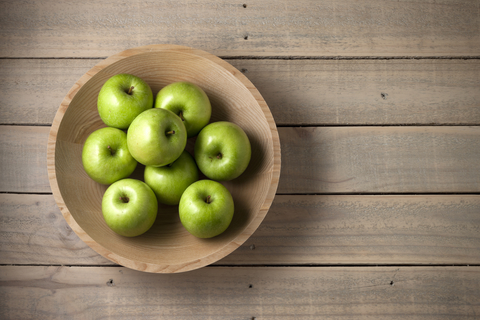 About 99 percent of apple samples tested had pesticides.

It can be difficult to find all of the produce you need when shopping in the organic sections at your local grocery store. And when you do find what you need, you might not want to pay the price (sometimes several dollars) for organic vs. non organic. Pesticides and the overall cleanliness of your food is most important, which is where the Dirty Dozen list comes into play.

Instead of going all organic, you can refer to the Environmental Working Group (EWG) for their handy shopping guide that helps you prioritize the shopping list. Their lists of the Clean Fifteen and Dirty Dozen foods will help you steer clear of those foods laden with the most pesticides and eat the cleanest diet you can.

Although organically grown foods don’t necessarily have higher nutrient levels, the more important factor is that they don’t contain a lot of harmful chemicals, such as pesticides, herbicides, antibiotics, and more. Research shows that organically grown crops do have significantly lower pesticide residues, as well as lower levels of toxins like cadmium, and choosing organic can lower your exposure to these contaminants.

Pesticides in particular pose a significant threat to human health. They may be linked to endocrine disorders, cancer, Parkinson’s disease, and depression. They could also particularly be dangerous for children, as they may negatively impact development.

In 2021, the  foods with the highest amounts of pesticides (the Dirty Dozen foods) include:

Foods do move in and out of the top 15. Such as bell peppers and hot peppers, which were tested for the first time since 2012, which now are number 10 on the list. While kale remains in the third spot, it’s now also listed with collard and mustard greens.

The EWG also lists the 15 foods with the least amount of pesticides (the Clean Fifteen). If you’re on a budget, buy the non-organic versions of these foods.

As EWG reports, relatively few pesticides were detected on these foods, and tests found low total concentrations of pesticide residues on them.

For more information, read the full report from the EWG.

Originally published in 2016, the article is regularly updated.