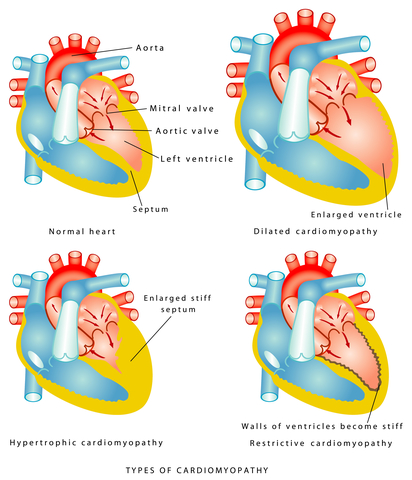 Nearly half of all heart failure cases are caused by diseases that primarily affect the heart muscle. Together, these are known as cardiomyopathies. What is cardiomyopathy? Cardiomyopathy is a heart disease that often occurs without a known reason, but can be caused by various medical conditions, including infections (usually viral), metabolic disorders, endocrine disorders, and adverse reactions to medications. A cardiomyopathy may have an autoimmune or genetic component, and can also be associated with alcohol or drug abuse, pregnancy, and prior radiation or chemotherapy.

It is hoped that genetic studies now underway, specifically those focused on genetic mutations associated with cardiomyopathies, will allow earlier diagnosis and treatment, or identification of preventive measures to delay or prevent the development of heart failure.

There are three major forms of cardiomyopathy, all of which may have a genetic component:

In this form, all chambers of the heart enlarge (dilate), and the ability of the left ventricle to contract is weakened. More blood than normal remains in the enlarged ventricle after a heartbeat, meaning less blood is pumped out with each contraction.

In dilated cardiomyopathy, the electrical signals that stimulate the heart to contract are sometimes unable to follow the right path, because the ventricle walls have been stretched out. As a result, in about 30 percent of patients with this condition, the free wall and septum of the left ventricle move out of synch, making ejection more difficult. This is called dyssynchrony, and it causes the ejection fraction to drop and heart failure to worsen.

A procedure called cardiac resynchronization therapy (CRT) can help make the ventricles contract properly. CRT involves implanting a biventricular pacemaker, usually in the left front chest below the collarbone. Its electrodes are programmed to stimulate both sides of the heart to contract at the same time. The procedure improves heart function, causing less need for diuretics. CRT also improves heart failure symptoms and quality of life, and reduces complications and the risk of sudden death. It may also improve left ventricular function, and reverse remodeling in some patients.

This form of cardiomyopathy is characterized by an increase in muscle mass and thickness of the left ventricle, which decreases the interior size of the ventricle. It can be obstructive or non-obstructive.

In hypertrophic obstructive cardiomyopathy (HOCM), the wall between the two ventricles (septum) becomes enlarged and obstructs blood flowing out of the left ventricle.

In non-obstructive hypertrophic cardiomyopathy, the thickened muscle does not obstruct blood flow and may contract vigorously, but it becomes stiff and is unable to relax normally. This causes improper filling between heartbeats: Less blood enters the ventricle, so less blood is pumped out. Improper filling causes blood to back up in the veins of the lungs, producing high blood pressure in the lungs (secondary pulmonary hypertension).

Because of the strong genetic component of hypertrophic cardiomyopathy, anyone diagnosed with the disease should encourage their children and siblings to have an echocardiogram and, possibly, a genetic test. At minimum, they should receive genetic counseling. Recent research indicates their risk of having heart failure or hypertrophic cardiomyopathy is 70 percent greater than normal.

In this type of cardiomyopathy, the heart is stiff and cannot fill properly, even though its pumping strength may be normal. An insufficient amount of blood enters the heart, so too little is pumped out. This uncommon form of cardiomyopathy may be caused by abnormal scarring (fibrosis), abnormal infiltration of the heart muscle with iron (hemochromatosis) or protein (amyloid), or unknown reasons.