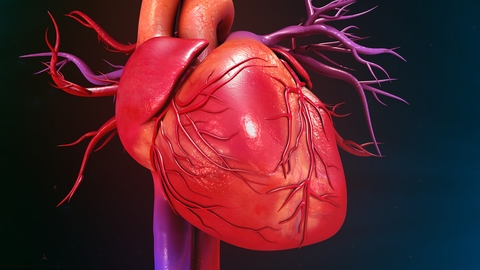 When the heart is experiencing ventricular fibrillation, it beats so rapidly out of sync that it is unable to pump blood.

About half of all heart failure patients die suddenly from cardiac arrest. Cardiac arrest is caused a deadly heart rhythm called ventricular fibrillation.

The heart has four chambers: two upper chambers called atria, and two lower chambers known as ventricles. The atria pump blood into the ventricles, and the ventricles pump blood out into the lungs and body. The heart must squeeze forcefully to pump blood to all parts of the body, but it must also relax between beats to fill properly with blood. If either part of this intricate system is damaged or weakened, heart failure can result.

Sometimes as the result of heart attack or a disease of the heart muscle, the electrical loop that signals the atria and ventricles to contract and relax gets interrupted. This can cause the normal rhythm to become disorganized, uncoordinated and, often, rapid.

If the problem is located in the atria, the heart may race or pound for a period of time. This is known as atrial fibrillation, and it often resolves on its own. If it lasts or recurs, anti-arrhythmia medications or a procedure known as ablation can be used to restore a normal heart rhythm.

When the problem occurs in the ventricles, the result is ventricular fibrillation, or “v-fib.” The heart beats so rapidly out of sync that it is unable to pump blood. The patient passes out, and unless a normal rhythm is restored with shock paddles, will die.

ICDs are highly effective, but the shocks can be painful. If the heart must be shocked often, an alternative such as medication or ablation is generally advised. A less painful method of shocking the heart into rhythm involves employing five to 10 fast pacemaker pulses called a burst. In appropriately selected patients this technique, called anti-tachycardia pacing, causes the heart rate to return to normal.

ICDs showed their superiority over medical therapy in the landmark Sudden Cardiac Death in Heart Failure Trial (SCD-HeFT). In this trial, ICDs were compared with amiodarone, the standard treatment for moderate heart failure, and placebo in 2,521 patients with NYHA class II and III heart failure and an ejection fraction of 35 percent or less. The ICDs were programmed to shock the heart when necessary, but not to pace it. The goal was to evaluate which treatment would improve the prognosis by reducing deaths from arrhythmia.

Patients were evaluated for more than two years. Of the 829 patients who received an ICD, 259 received shocks from the device, and 68 percent of these were for life-threatening ventricular tachycardia or ventricular fibrillation. ICDs were found to reduce the risk of sudden death by 23 percent, whereas amiodarone offered no survival benefit. As a result of SCD-HeFT, the standard of care for these patients changed in favor of ICD therapy, despite a five-percent rate of device-related complications.

The SCD-HeFT trial held some surprises. Patients with milder (NYHA class II) disease benefited greatly from the ICD, but the device failed to help sicker patients (NYHA class III). ICDs also tended to work better in patients who had ejection fractions less than or equal to 30 percent, were able to walk six minutes on a treadmill, were under age 65, did not have diabetes, and were taking beta-blockers. Since exercise does not trigger shocks, patients are able to exercise, improving their overall health and quality of life.