Home » Daily » Digestive Health » Should You Use an Enema for Constipation? 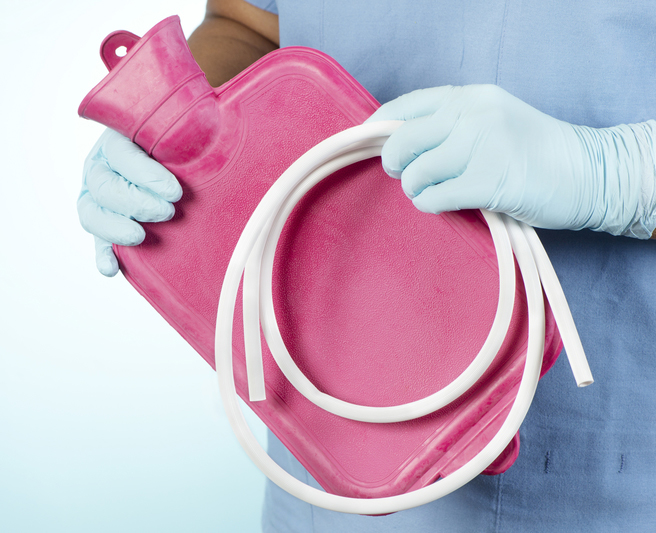 Feeling bound up? You may be tempted to use an enema for constipation, but... not so fast. Our post discusses reasons for caution.

Being constipated stinks—your bowel movements are dry, almost painful to pass, with little relief. Worse yet, you can manage to push something through only a couple of days a week. You feel bloated, fatigued, and just plain uncomfortable. It’s all you can think about. And, after a week or so, you’ll do almost anything just to have a normal bowel movement—even giving yourself an enema for constipation.

Well, we hope you consult your physician rather than reach for an enema, as it is important to rule out an more serious underlying condition. For constipation, there are so many better choices than a home “DIY” enema involving mixtures you find on the Internet. Even a commercial enema product is a wiser move.

How an Enema Works

When you use an enema for constipation—or anything else, for that matter—you’re forcing fluid up into the large intestine through the rectum in a direction counter to the direction those organs are designed to work. You’ll likely notice your rectum isn’t very cooperative, as you gently push the tube into it and then force the fluid from the enema bag into your colon. And “gently push” is extremely important; don’t force it. Done properly, though, the results should appear in about five minutes. It’s just not something you want to do regularly, especially just so you can be regular.

An enema procedure is invasive. Period. It can damage the tissue in the rectum and intestine, possibly causing the colon to not perform properly. A tear could require surgery. Depending on the solution used, an enema can disrupt the natural beneficial digestive bacteria in your colon and/or introduce harmful bacteria, which may upset your digestive process.

If you use a home enema, even if it’s a so-called cleansing enema or a commercial enema—and you have feelings of nausea, bleeding, cramping, or diarrhea afterward—you should seek medical help immediately. Dehydration is sometimes seen after an enema procedure. An embolism (blockage) is rare, but possible, and very serious. Colon cleansing or irrigation to remove toxins from your colon is not helpful and may be harmful.

Yes, enemas are routinely used as part of your preparation for a colonoscopy because your intestines need to be “squeaky” clean in order for the doctor to check for polyps and growths. This is usually done once or twice a decade, of course. A medical enema may also be prescribed for those suffering from irritable bowel disease, but again, it’s not routine. And, yes, your doctor might recommend an enema for constipation, but rarely before trying other treatments.

A quick Internet search will bring up a host of solutions—some a bit disturbing—that are used for enemas, including cold tap water, warm water, soapy water, lemon juice, olive oil, coffee, salt water, milk, laxatives (often bisacodyl, the drug found in Dulcolax and other commercial products), and mineral oil. Not all of these selections are healthy, and some can be harmful to use as an enema for constipation or any other reason. Warm water or saline is probably your best choice.

A study from Applied Nursing Research looked at colonic cleansing, fluid absorption, and discomfort following tap water and soapsuds enemas. They found that the soapsuds produced greater output than tap water and was tolerated as well as just water. They also found that patients who received the water enemas actually retained more fluid than was eliminated.

If you’re going to use a home enema kit, it’s extremely important to follow the instructions that accompany the kit, as they may vary.

The safest choice for an enema procedure is generally a disposable commercial product, such as the Fleet Enema, a small-volume enema that contains either bisacodyl, saline, or mineral oil. The product works within two to 15 minutes.

Some of the water and chemicals from the enema is absorbed into the bloodstream, so it is important not to repeat too often. FDA issued a warning in 2014 “that using more than one dose in 24 hours of over-the-counter (OTC) sodium phosphate drugs (used in some commercial enemas) to treat constipation can cause rare but serious harm to the kidneys and heart, and even death.”

How to Treat Constipation

There are healthy dietary and lifestyle changes you can make to combat chronic constipation as well:

When to Call Your Doctor for Constipation