Home » Daily » Stress & Anxiety » Does Claustrophobia Put You in a Panic? Here’s How to Handle It 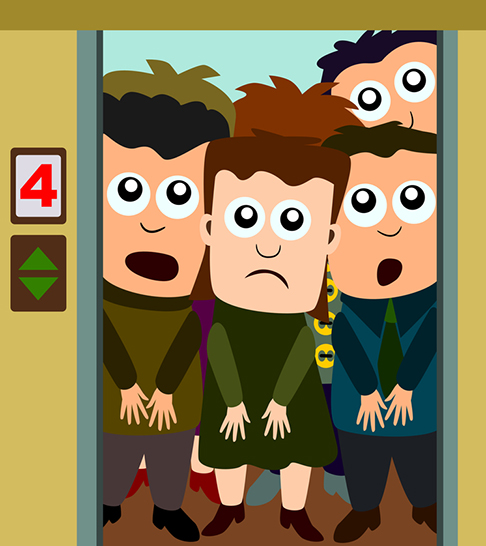 "Forty-fourth floor?!?" An elevator can be a source of stress for anyone with claustrophobia.

Have you ever felt panic attack symptoms brought on simply by being in an enclosed space—an airplane, a train heading into a tunnel, even the back seat of a car? If so, then you may already know that claustrophobia is a specific type of anxiety disorder. For some people, it’s triggered when confined in a small space. For others, the mere thought of being in a tight space can produce anxiety symptoms.

People with claustrophobia aren’t necessarily fearful of the space itself, but rather, what may happen to them if they’re unable to exit the space. Claustrophobia sufferers often report feeling that they cannot breathe or that they feel trapped.

If you’re a known sufferer of claustrophobia, you likely have experienced its common symptoms, which include the following:

Claustrophobia may be related, experts say, to one’s perception of his or her own “personal space.” 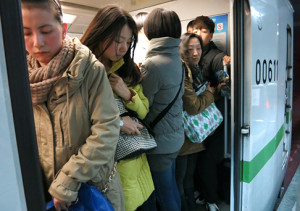 Getting stuck in cramped, confined quarters can bring out claustrophobia-related anxieties in us. (Photo: © Mitchblatt | Dreamstime.com)

“We’ve found that people who are higher in claustrophobic fear have an exaggerated sense of the near space surrounding them,” according to Stella Lourenco, PHD, a psychologist and researcher at Emory University. Dr. Lourenco and her colleagues conducted a study and found that people who perceive their personal space as a distance that is longer than arm’s reach were more likely to experience claustrophobia.

Usually, a psychiatrist or psychologist evaluates a patient and determines whether his or her symptoms warrant a diagnosis of claustrophobia. The doctor needs a detailed explanation of what symptoms the patient experiences as well as the situation that prompts symptoms. The doctor also may have the patient fill out a questionnaire designed specifically to help identify claustrophobia.

The diagnostic criteria for claustrophobia include:

Treatment for claustrophobia often includes cognitive behavioral therapy (CBT). This type of psychological treatment aims to change the patient’s thinking so that he or she can learn to cope with being in enclosed spaces. Sometimes, treatment includes desensitization, which involves repeated exposure to the situation or object that triggers anxiety symptoms, with progressing degrees of involvement.

Medications are sometimes prescribed for claustrophobia. Options include antidepressants in the class of selective serotonin reuptake inhibitors, such as Paxil, Prozac, and Zoloft.

Anti-anxiety medications (Xanax, Valium) can help reduce feelings of anxiety, although caution is needed with these drugs, since they can be addictive. And beta-blockers—drugs that block the effects of adrenaline in your body—can prevent symptoms such as rapid, pounding heartbeat and shaking or trembling, especially prior to situations in which feelings of anxiety are likely.