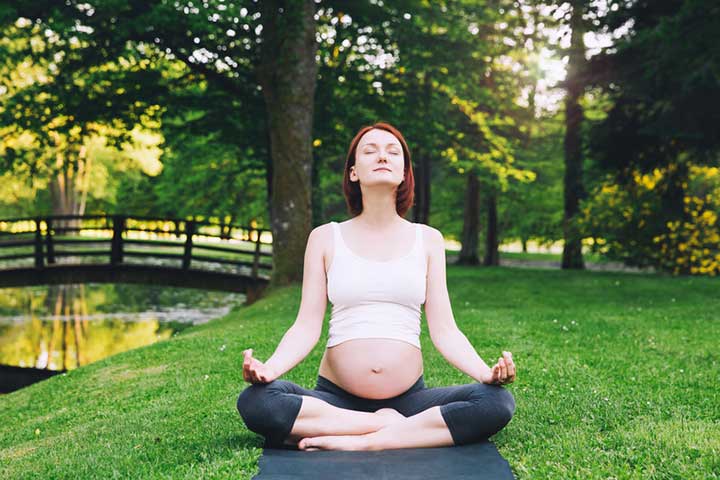 Plenty of evidence shows that prenatal yoga has important benefits for the physical and emotional health of women and their future children.

Feeling anxious during your pregnancy is not uncommon given all the changes and expectations that go along with transitioning to motherhood. But yoga can be a powerful tool to keep you feeling calm. A new study published in the journal Depression and Anxiety reports that doing prenatal yoga can effectively treat pregnancy anxiety. [1]

Not only can yoga greatly reduce feelings of stress and anxiety, researchers from the University of Manchester in the UK found, but it can also prevent symptoms of depression from developing as the pregnancy progresses.

Pregnancy Anxiety Is Detrimental to Both Baby and Mom

Between 6 percent and 21 percent of women have an anxiety disorder during pregnancy, making anxiety more common than depression during this period.[2] An additional 15 percent of women have elevated pregnancy anxiety that doesn’t meet the criteria for an anxiety disorder.[2] Unfortunately, anxiety and stress during pregnancy are associated with premature birth,[3] low birth weight,[4] developmental delay,[5] and behavioral problems in the child as a toddler and young adult.[6]

For the mother, feeling stressed and anxious during pregnancy contributes to an experience of frustration, loss, and dissatisfaction with the pregnancy and motherhood experience.[7] It is also linked with later mental health problems, particularly depression.[6] In fact, a high level of anxiety during pregnancy is linked with postpartum depression, which in turn is associated with increased risk of developing depression later in life.[6]

The new study showed that women who attended one yoga class a week for eight weeks had decreased anxiety symptoms compared to the control group who received normal pregnancy treatment. Researchers looked at 59 women who were pregnant for the first time and asked them to report on their emotional state using a number of validated standardized questionnaires. The women’s stress hormone (cortisol) levels were also measured. The yoga session involved relaxation and breathing techniques with postures that were adapted for pregnant women.

At the end of the eight weeks, women who attended the yoga classes had significantly decreased anxiety scores compared to the control group who received normal prenatal treatment. After the first yoga session, anxiety symptoms were lowered by one-third and stress hormone levels by 14%.[6] These excellent results remained after the final yoga session of the eight-week intervention. Women who were allocated to the treatment-as-usual group, meanwhile, showed increased depression symptoms at the end of the 8-week study.[1]

Interested in taking up yoga, but having trouble getting started? UHN Contributing Editor JoAnn Milivojevic has authored a post that should be helpful: “Yoga for Beginners: How It Benefits Your Body, Mind, and Spirit.”

Because pregnancy anxiety may increase the risk of preterm births, low-birth-weight children, and other problems for both the child and mother, as discussed above, prenatal yoga has the potential to help prevent all these conditions. The researchers were particularly optimistic about yoga’s promising ability to prevent postpartum depression.[6]

Indeed, another study that was published only a month after the UK study found that yoga sessions not only improved mood and lowered cortisol levels during pregnancy, but also resulted in significantly lower rates of postpartum depression.[8]

In addition to lowering rates of pregnancy anxiety and postpartum depression, there is evidence that yoga during pregnancy can:

How to Ease Pregnancy Anxiety, Stress, and Depression with Yoga

Plenty of evidence shows that prenatal yoga has important benefits for the physical and emotional health of women and their future children. Any woman who is feeling stressed, anxious, or depressed during her pregnancy need not fear getting help. Talk with your health care provider and consider signing up for a prenatal yoga class. These classes are designed especially for the comfort and wellbeing of pregnant women and are offered through hospitals and clinics as well as many yoga studios, gyms, and community centers.

Practicing yoga in a class setting with other pregnant women and having an experienced, attentive, hands-on yoga instructor is recommended. But if there are no opportunities for attending a class near you, consider purchasing prenatal yoga DVDs or borrowing them from your local library.