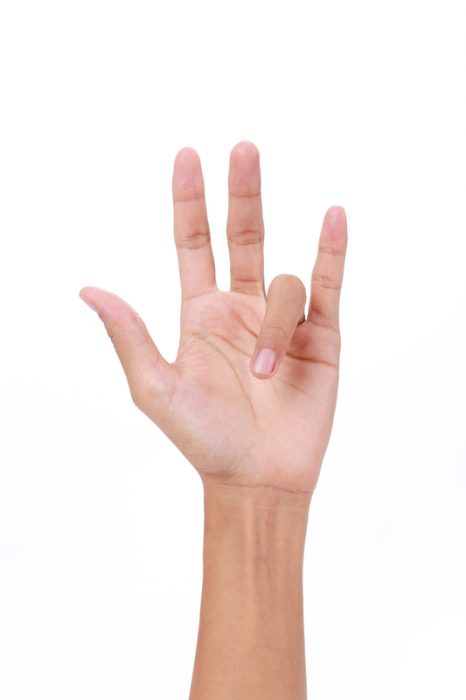 Trigger finger typically affects the ring finger and also the thumb—not the finger we associate with a gun's trigger.

Trigger finger happens when a finger gets stuck in a bent position, but the finger in question is not the one most people associate with pulling a trigger. Rather, the ring finger and the thumb are most often affected by this condition, according to the American Academy of Orthopaedic Surgeons.

The exact cause is unknown, but the risk is higher among those who have gout, diabetes, and rheumatoid arthritis. The American Society for Surgery of the Hand says trigger finger (stenosing tenosynovitis) is also associated with repeated and strong gripping—a forceful use of the fingers and thumb. People between the ages of 40 and 60 are more likely to develop the condition than others.

Tendons (flexor tendons, to be medically correct) attach muscles of the forearm to the fingers, and they have to pass through a tunnel in the palm called the tendon sheath. Along the way are bands of tissue that act as pulleys when the fingers move. When the A1 pulley becomes inflamed and thickens, it’s more difficult for the flexor tendon to glide through as the finger bends.

If a nodule develops on the tendon, movement is even more difficult. The tendon can even move out of the sheath when the finger bends. In severe cases, the finger gets locked in a bent position.

What Are the Symptoms of Trigger Finger?

At first, you may notice pain or discomfort at the base of the finger or thumb. With time, other symptoms may include:

How Is Trigger Finger Diagnosed and Treated?

In making a diagnosis, a doctor will look for the three T’s: tenderness, thickening, and triggering . Imaging is not needed.

Conservative treatment of trigger finger is usually successful. It begins with rest, or at least avoiding the movements that cause the symptoms.

Other nonsurgical measures include:

Surgery is needed in 20 to 50 percent of people to treat chronic trigger finger, but the decision depends on the level of pain, degree of dysfunction, and effectiveness (ineffectiveness) of conservative measures.

Three types of surgery—open, percutaneous, and tenosynovectomy—may be considered. In open surgery, an incision is made in the palm in order to cut the tendon sheath and give the tendon room to move. In the percutaneous release procedure, a needle is inserted at the base of the finger to sever the tendon sheath.

A  2012 study published in the journal Rheumatology found that open and percutaneous surgery were similarly effective and superior to conservative methods in both resolving the problem and preventing relapse. A 2017 study in Orthopedics found that percutanenous release was effective in the short term, but open surgery may provide better long-term outcomes.

If the first two options are not suitable, the tenosynovectomy procedure removes part of the tendon sheath to allow the finger to move freely.

Regardless of the type of surgery, recovery takes a couple of weeks or longer, depending on the person’s age and general health and how long the condition has existed. In some cases, physical therapy might be recommended following surgery.

What’s the Outlook for People with Trigger Finger?

Whether treated conservatively or with surgery, the outlook is good for people with trigger finger. Although not a guarantee, most people regain normal function and are not likely to have a recurrence.

Also, for information on a similar condition called De Quervain’s tenosynovitis, visit this page at the website of the American Society for Surgery of the Hand (ASSH).

“Patients with de Quervain’s tenosynovitis,” according to the ASSH, “have painful tendons on the thumb side of the wrist…. In de Quervain’s tenosynovitis, the tunnels where the tendons run can narrow, or the tendons can take up extra space in the tunnel. This can be due to a thickening of the soft tissues that make up the tunnel or an increase in the amount of soft tissue within the tunnel. In this condition, hand and thumb motion can cause pain, especially with forceful grasping or twisting.”