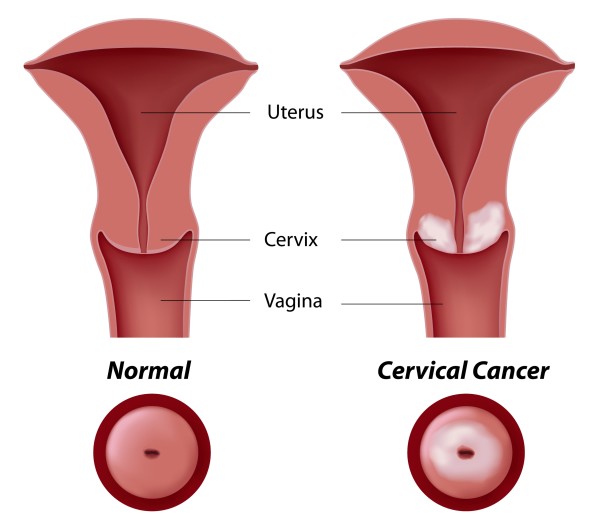 Cervical cancer presents as a waxy discoloration at the opening of the cervix.

In years past, cervical cancer was one of the leading causes of cancer death among American women. One of the primary reasons why it was so deadly is because most women experience no cervical cancer symptoms until the disease has spread.

But in the past 30 years, deaths from cervical cancer have been cut in half, due primarily to screening tests and preventive health examinations, the American Cancer Society (ACS) reports. Still, more than 4,000 women die from the disease each year, according to the ACS. So before you develop any cervical cancer symptoms—and to prevent the disease in the first place—talk to your doctor about periodic gynecologic exams and whether you should be vaccinated against a common cause of cervical cancer.

Cervical cancer generally begins as changes to the cells lining the cervix, the lower portion of the uterus. Oftentimes, these precancerous cells go away on their own, but in some women they develop into dangerous invasive cancers. Although the transformation from precancerous cells to invasive cervical cancer usually takes place over several years, it can occur more rapidly, in less than a year.

Although these problems may be signs of cervical cancer, they also may be symptoms of other medical conditions, such as an infection. These warning signs warrant an immediate visit to your doctor.

Early Detection a Must

Cervical cancer is curable if found early. But once the cancer progresses, the prognosis worsens, and the likelihood of a cure diminishes.

Fortunately, these days doctors find precancerous changes in the cervix much more commonly than they do invasive cervical cancer. Regular screening with the Pap test has allowed for earlier detection and treatment of these cellular changes before cancer develops. The Pap test involves a swab of the cervix to remove cells for examination under a microscope. Your doctor also may order a test for human papillomavirus (HPV) along with the Pap test.

The ACS and other medical organizations recommend that women begin cervical cancer screening at age 21, along with these other recommendations:

However, those with a history of abnormal cervical changes should continue screening for at least 20 years after precancerous cells were found.

If your screening tests are abnormal or you have suspected cervical cancer symptoms, your doctor will order a colposcopy, a detailed examination of the cervix. Any suspicious areas will be biopsied to confirm a diagnosis.

Note that just because guidelines do not recommend yearly Pap tests, that doesn’t necessarily mean you should abandon your annual gynecologic examinations. Talk to your physician about the importance of these exams.

Know Your Risk and Reduce It

Several factors increase your odds of developing cervical cancer, such as smoking, a weakened immune system, becoming pregnant before age 17, obesity, and having a mother or sister who had cervical cancer.

However, infection with HPV is the most important risk factor for cervical cancer. HPV encompasses more than 150 viruses and can be transmitted during sex or skin-to-skin contact. HPV infections are fairly common, and in most cases the immune system simply clears the infection. But in some cases, the infection persists and may cause cervical cancer and other malignancies.

Avoiding activities that increase exposure to HPV, such as having sex at a younger age or having many sex partners, may help reduce your risk of HPV infection and, potentially, cervical cancer.

Also, talk to your doctor about the HPV vaccine, which consists of three injections given over six months. The vaccine can protect against new, but not existing, HPV infections, so to offer the most protection, it should be given before you become sexually active.

The ACS and the U.S. Advisory Committee on Immunization Practices recommend the HPV vaccine for girls ages 11 to 12, and it may be considered for girls as young as age 9. The ACIP recommends “catch-up” vaccinations for women ages 13 to 26 who haven’t already received the HPV vaccine; the ACS recommends these catch-up vaccinations for girls up to age 18, while those ages 19 to 26 should talk to their doctor about their HPV risk and whether they still need the vaccine.