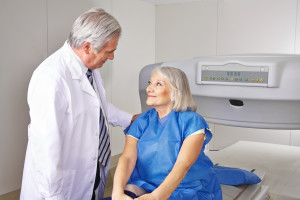 Talk to your doctor about your risk of endometrial cancer. Uterine cancer symptoms can range from unintentional weight loss to pelvic pain to abnormal bleeding.

Endometrial cancer is the most common cancer of the female reproductive system. Endometrial and other cancers of the uterine body (the upper part of the uterus) are newly diagnosed in more than 54,000 women each year, according to The American Cancer Society. Almost all uterine cancers originate in the inner lining, or endometrium. Others, known as uterine sarcomas, develop in the myometrium, a layer of muscle and connective tissue. Fortunately, women often are alerted to the presence of these cancers. Vaginal bleeding and other uterine cancer symptoms afford women an opportunity for early diagnosis and treatment of the disease.

Before you develop symptoms of uterine cancer, be sure to understand your risk for the disease and, when possible, take action to minimize it.

Be Alert for Uterine Cancer Symptoms

Screening to detect endometrial cancer or uterine sarcoma in women at average risk of these cancers is generally not recommended. However, in many cases, endometrial cancer causes symptoms that, if reported to your doctor, allow for treatment in the cancer’s early stages.

As many as nine out of 10 women with endometrial cancer experience abnormal vaginal bleeding, such as bleeding after menopause or bleeding that is not part of a woman’s regular menstrual period. Another common symptom is abnormal vaginal discharge, with or without blood.

You also may experience other uterine cancer symptoms:

Uterine sarcoma shares the same symptoms as endometrial cancer, but its warning signs often do not appear until the disease has reached a more advanced stage.

Abnormal vaginal bleeding and discharge may be common uterine cancer symptoms, but they also can be caused by something other than cancer, the ACS notes. For this reason, it’s important to see your doctor to distinguish symptoms of uterine cancer from signs of a benign condition.

The risk of uterine cancer is greatly influenced by factors that shift the balance of the two primary female hormones—estrogen and progesterone—in favor of estrogen. For instance, postmenopausal women who still have a uterus who receive hormone replacement therapy with estrogen only (without progesterone) are at greater risk of endometrial cancer. Similarly, the drug tamoxifen (Nolvadex), used to treat breast cancer, can act like an estrogen in the uterus and increase endometrial cancer risk.

The risk of uterine cancer is also greater in women with a higher number of lifetime menstrual cycles (e.g. those starting their periods before age 12 and/or entering menopause later in life) and those who have never given birth or are infertile.

Also, since excess fat tissue can raise estrogen levels, the risk of endometrial cancer is twice as great in overweight women and three times higher in obese women, compared to their normal-weight counterparts, the ACS notes. Women with diabetes and high blood pressure are more likely to develop endometrial cancer. A sedentary lifestyle and diets high in fatty foods also have been linked to greater endometrial cancer risk.

The chances of developing endometrial cancer increase with age, and also may be higher in women with a history of ovarian cancer or breast cancer. Previous radiation therapy to the pelvis may increase the risk of endometrial cancer and uterine sarcoma.