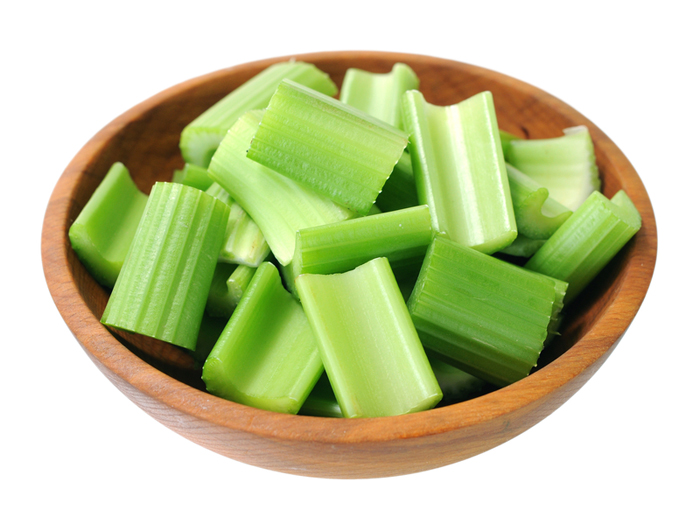 Get to love celery, if you don't already. While there are no "zero-calorie foods," this is one that comes close.

Wouldn’t it be nice if you could sit down to a hot fudge sundae with zero calories? Or chow down on guilty pleasures like cookies, chips, and bread without adding any calories? The concept of “zero-calorie foods” is a fantasy, although there are certainly low-calorie foods that can help you feel full without feeling heavy.

Then there’s the concept of so-called “negative-calorie foods.” Certain types of food—celery is usually mentioned first—that, as some health experts claim, account for negative calories when you back out the energy it takes to chew, absorb, and digest. As “enticing” as that concept sounds, writes Christy Wilson, RD, for the Academy of Nutrition and Dietetics website, “there is no research to support this claim. Although foods such as celery, lettuce, and cucumbers may have negligible calories, make no mistake, they still count toward a day’s worth of calories.”

As our Dawn Bialy writes about calorie counters, “Nutritionists often recommend reducing the number of calories consumed.” So while you won’t find zero-calorie foods, you can make sure the following items have a regular place in your diet. Your best bet is—no surprise—the produce section of your grocery store. But you don’t have to stop there. You’ll find a number of other selections among fruits and packaged treats that will add very little to your calorie count.

Vegetables, of course, are your best bet for almost-zero calories. Granted, they’re not as tasty to most of us as, say, ice cream, but don’t let that thought keep you from three to five servings per day, experts say. Here are 10 veggies with low calorie counts.

What about zero-calorie beverages?

We know that the concept of zero-calorie foods is a stretch, but how about zero-calorie drinks? Here’s how the World Heritage Encyclopedia sums up that question:

“Water has zero calories and cold water is ‘negative-calorie’ since the body must warm it to body temperature. Some infusions like plain tea and coffee are also effectively zero calorie, and their caffeine can also increase one’s metabolic rate. The weight loss occasioned from heating chilled beverages, however, is minimal: five or six ice-cold glasses of water burn about 10 extra calories a day and would require about a year to eliminate a pound of fat. (Additionally, excessive water consumption can be dangerous.)

“Urban legends that diet soda manufacturers bribe the Food & Drug Administration to defraud the public have not been proved, but the FDA does permit any food or drink with less than 5 calories per serving to be labelled as containing 0 calories. Replacement of standard sodas with diet ones has been linked to ‘significant weight loss’ by some studies but others have found no benefit at all, as participants simply consumed more calories from other sources.”