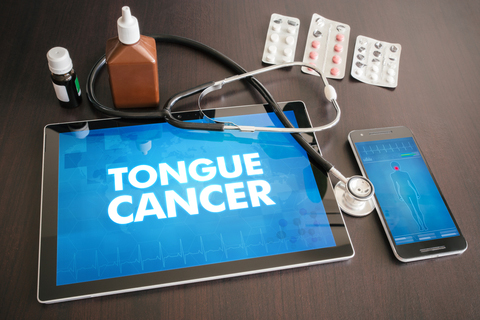 Among the common causes of tongue cancer: tobacco, alcohol, and the "double-whammy" of tobacco-alcohol use together.

Tongue cancer is the most common mouth cancer in the United States, responsible for around 2 percent of all cancers diagnosed. It affects men twice as often as women. The incidence varies greatly between countries, a fact that points to its link to societal habits such as chewing betel nuts and reverse smoking (putting the lit end of the cigarette in the mouth)—common in some countries but rare in the US.

Tongue cancer diagnosis is often delayed, as it mimics more common innocent conditions. In addition, it’s a difficult disease to manage because any treatment affects chewing, swallowing, and speech.

Unlike many other cancers, we do know what causes tongue cancer in the majority of people.

Symptoms and Signs of Tongue Cancer

Cancerous phase:
Most people present with lesions in the front two-thirds of the tongue. According to the Centers for Disease Control (CDC), symptoms include:

Two of the key questions anyone diagnosed with cancer will ask are: “How long will I live?” and “What is the survival rate?” For tongue cancer, the answer to these questionsdepend on a few factors including:

The therapeutic decisions usually take into account the person’s age, lifestyle, and preference.

Radiotherapy
Radiation preserves the anatomy and function of the tongue. There are three options: Traditional external beam radiotherapy, orthovoltage radiotherapy, and brachytherapy, in which small radioactive seeds are injected into the diseased area. Radiation may result in significant swelling (edema) of the tongue that interferes with breathing, necessitating a tracheotomy (tube in throat to facilitate breathing).

Surgery
Surgery involves removal (resection) of the tumor. The extent and position of the surgery influences the effect on the function and anatomy of the tongue.

Chemotherapy
Chemotherapy’s use is limited to those patients with large tumors that have spread. Its effectiveness is not well understood.

Tongue cancer is an unpleasant and distressing disease. Prevention is definitely better than cure. If you want to reduce your risk:

For more information on mouth and throat cancers read our articles: