Home » Daily » Heart Health » The Pacemaker: Our Primer Explains How It Keeps Your Heart’s Rhythm In Step 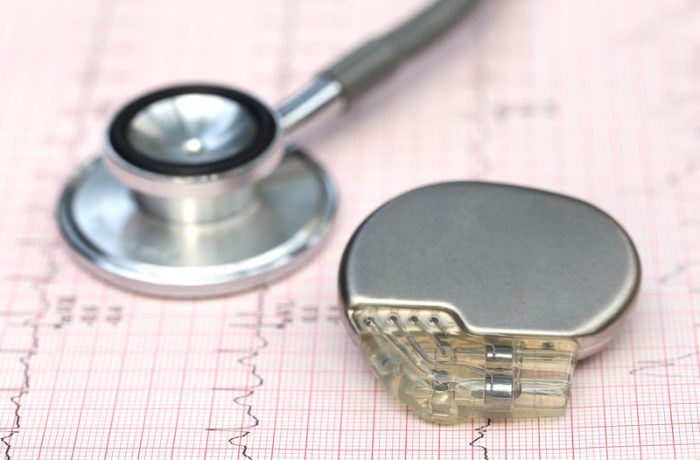 A pacemaker device features a tiny pulse generator along with a battery, wiring, and a computer.

Do you have a pacemaker? If so, you’re benefiting from one of the most important developments in the history of medical technology. When the heart’s natural timing circuits go on the fritz, and if medication falls short, pacemakers can come to the rescue. Heart conditions that used to be fatal can now be essentially cured by implanting a small device in the chest during an outpatient surgery.

The heart is a fist-sized pump made out of muscle. To pump blood efficiently, two upper chambers (atria) and two larger, lower chambers (the ventricles) have to contract in the right order and at the proper rate.

The impulses help maintain the proper timing or “pacing” of the heart to pump blood through the heart’s four chambers. Normal pacing includes both the right heart rate (how fast the heart beats) and the proper rhythm. 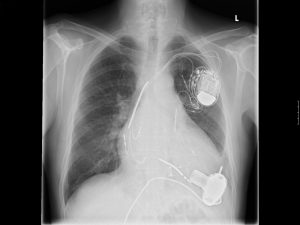 How a Pacemaker Is Implanted

Pacemakers are implanted just below the skin surface in the left upper chest. The typical incision required is about 2 inches long. You’ll normally be awake for the implant, with local anesthesia to numb the area where the pacemakers will be inserted. You’ll take a sedative to relax you during the procedure, though you will remain otherwise conscious.

If you experience complications after the implant procedure, it usually will be one of these:

What Does a Pacemaker Do?

Electrical impulses from the pacemaker make sure the different chambers of the heart contract (squeeze inward) in a coordinated way. This keeps blood flowing to the rest of the body despite abnormalities in the heart’s natural rhythms.

How Does a Pacemaker Work?

A typical pacemaker is roughly the width of a half-dollar and several times thicker. The device includes a tiny pulse generator, a battery, wiring, and a computer.

Insulated wires, called leads, are run from the pacemaker, through veins, and into the heart. Pacemakers can have one, two, or three leads, depending on the type of arrhythmia and the therapy needed. Most pacemakers implanted today have two leads—one to the right atrium and the other to the right ventricle.

The pacemaker’s circuits monitor your natural cardiac rhythm and deliver tiny jolts to where they are needed to make the heart operate properly. Most pacemakers also can sense your breathing and physical motion, allowing them to tune your heart rate to the body’s needs.

The pacemaker’s battery is internal, so the entire device has to be swapped out when the battery runs out. Pacemaker batteries can last five to 15 years, though the average is around six to seven years.

Who Needs a Pacemaker?

Arrhythmias cause some distinctive types of symptoms. The most common that people report include:

People sometimes develop slow heartbeats after a heart attack, which temporarily interrupts the supply of oxygen-rich blood to heart muscle. Bad reactions to medications and physical trauma to the heart (as during a car accident) also can cause bradycardia. In such cases, a pacemaker might be installed temporarily until the function of the heart returns to normal.

Pacemakers also are used to treat heart failure. Heart failure is when the heart is unable to pump enough blood to meet the body’s needs. In such cases, a special type of pacemaker can provide cardiac resynchronization therapy (CRT). This is for people with heart failure experiencing moderate to severe symptoms, and whose left and right heart chambers do not beat in unison.

In CRT, a special pacemaker pacemaker helps the ventricles on both sides of the heart to work together. The device that does this is called a biventricular pacemaker. One lead goes to the right atrium and the other two go to the right and left ventricles.

Some people with heart failure are at significant risk of sudden cardiac death caused by fast or uneven beating in the heart’s main pumping chambers. In such cases, a person can get an enhanced pacemaker called an implantable cardioverter-defibrillator, or ICD.

The ICD provides pacing to maintain optimal cardiac rhythms and also can shock the heart back to normal rhythm if it develops dangerous ventricular rhythms. The device is larger than a normal pacemaker—about the size of a cell phone. It is implanted either under your collarbone or in the abdomen.

You have probably seen the full-size equivalent of an ICD hanging in boxes on the walls of public buildings. The boxy device is an automated external defibrillator, or AED. These can be used to save a person’s life if they go into cardiac arrest from ventricular arrhythmia.

Living with a Pacemaker

Pacemakers are reliable and safe but you need to make certain adaptations once you have one: