Atrial fibrillation is an arrhythmia in the top chambers of the heart (atria) causing uncoordinated muscular contractions that weaken the heart’s ability to pump. It is characterized by rapid and irregular beating.

Often it starts as brief periods of abnormal beating which become longer and possibly constant over time. Most episodes have no symptoms. Occasionally there may be heart palpitations, fainting, shortness of breath, or chest pain. The disease increases the risk of heart failure, dementia, and stroke.

Although atrial fibrillation itself usually isn’t life-threatening, it is a serious medical condition that sometimes requires emergency treatment.

Other factors include excess alcohol intake, diabetes mellitus, and thyrotoxicosis. However, half of cases are not associated with one of these risks.

A diagnosis is made by feeling the pulse and may be confirmed using an electrocardiogram (ECG). The typical ECG shows no P waves and an irregular ventricular rate.

AF is often treated with medications to slow the heart rate to a near normal range (known as rate control) or to convert the rhythm to normal sinus rhythm (known as rhythm control). Electrical cardioversion can also be used to convert AF to a normal sinus rhythm and is often used emergently if the person is unstable. Ablation may prevent recurrence in some people. Depending on the risk of stroke, either aspirin or anti-clotting medications such as warfarin or a novel oral anticoagulant may be recommended. While these medications reduce this risk, they increase rates of major bleeding.

The American Heart Association recommends that anyone with hypertension should be monitoring blood pressure at home. Monitoring at home is the best way to see if your treatment is working to control your blood pressure. [1,2] Home monitoring may also help your doctor diagnose hypertension. Some people tend to have … Read More 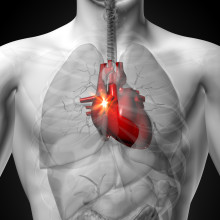 The 4 Heart Problems You Shouldn’t Ignore

Heart disease is the leading cause of death in the U.S., so it’s important that you can recognize the signs of a heart problem. Symptoms of heart disease, also called coronary artery disease (CAD), abnormal heart rhythms (arrhythmias), and heart failure sometimes overlap. But if you’re at risk for any … Read More

Often, high blood pressure is a byproduct of an unhealthy lifestyle or other modifiable factors. Here are five blood pressure risk factors that you can modify with some guidance from your doctor. An Unhealthy, High-Sodium Diet You’re probably aware that sodium is the dietary devil when it comes to high … Read More

High Cholesterol: 10 Ways It Can Harm Your Body

High cholesterol can have wide-ranging effects—both direct and indirect—on your heart and several other organs served by your vascular system. As cholesterol builds in the arteries of your heart, brain, and throughout your body, it usually does so silently. In some cases, the first signs of atherosclerosis may be a … Read More

Is Monster Bad for You? 3 Things You Need to Know About Energy Drinks

Before you reach for a Monster energy drink, consider this: Are energy drinks bad for you? A growing number of studies are finding that products like Monster, Red Bull, and 5-Hour Energy can result in a variety of health dangers without offering any unique benefits. The extreme acidity and high … Read More

Blood Pressure Medication: Which Is the Right One for You?

A third or more of Americans have high blood pressure, or hypertension. What is high blood pressure? When the heart pumps, the pressure against the walls of your arteries is abnormally high. The excess pressure, if not controlled, puts you at risk for heart attack, stroke, kidney damage, and other serious … Read More

The Pacemaker: Our Primer Explains How It Keeps Your Heart’s Rhythm In Step

Do you have a pacemaker? If so, you're benefiting from one of the most important developments in the history of medical technology. When the heart’s natural timing circuits go on the fritz, and if medication falls short, pacemakers can come to the rescue. Heart conditions that used to be fatal … Read More

You feel fatigued, and you tire out more easily, unable to do some of the things you used to do. You might attribute your symptoms to any number of health problems, but then you notice a fluttering sensation in your chest. You have atrial fibrillation. Fatigue, heart palpitations, progressive weakness, … Read More